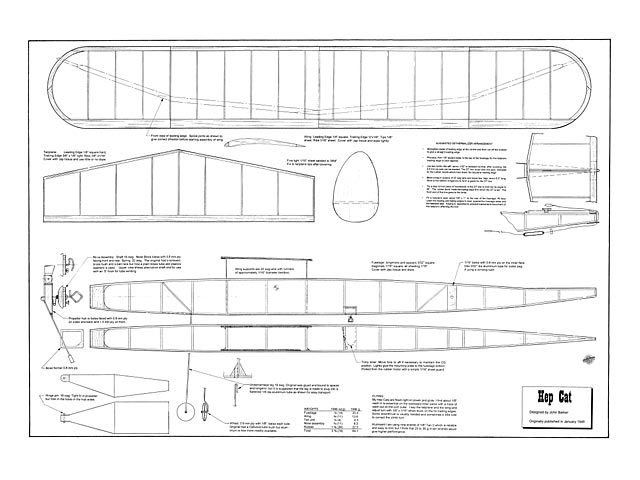 The Hep Cat (oz1765) was originally published in January 1946. This here is a later redrawn plan, featured in Dec 1996 AMI, along with some additional notes on it re flying and dethermalizer arrangement (by the designer himself).

Quote: "My Hep Cats are flown right on power and glide. I find about 1/8 wash in essential on the starboard inner panel with a trace of wash out on the port outer. I key the tailplane and the wing and adjust turns with 1/8 x 1/16 strips stuck on the fin trailing edges. Some downthrust is usually needed and sometimes a little side to correct the climb turn."

This fifty-year-old free fighter is of a type that suddenly appeared in the mid 1940's and was often called an 'ultra lightweight stick model'. They are simple models and may appear to be of no great importance except that they used little material in a period of war-time shortages. However, I believe they had a significance in the development of British aeromodelling which was not realised at the time they were introduced and is not appreciated today.

Mick Farthing must be given the credit for starting the type. Other similar designs followed but the take up of this style of model was not as rapid as might have been expected considering their excellent flying properties: To understand this you have to remember the times in which we lived. In those days youngsters took notice of their 'elders and betters' and they respected authority. The leaders of aeromodelling in this country assumed they knew best what a model aeroplane should be like which meant including cabins (for imaginary pilots), undercarriages built like a dockyard crane and other peculiarities born of blinkered minds. Perhaps worst of all was the actual rule which said that the fuselage cross section must be at least the length squared divided by 100. This was on a par with the Air Ministry edict that said the RAF could not have monoplanes because biplanes were stronger. To ensure that the progress of British aeromodelling should be slowed as much as possible there was a further rule which limited the area of the tailplane to a third of the wing area.

So, you will ask, what has all this got to do with 'ultra lightweight stick models'? Well, first of all let us consider this name that they were given. Ultra lightweight was almost a term of abuse. The implication was that you were flying a paper bag and could not build a 'proper' model. In fact they were not particularly light, the 'Wakefield' models of several years before were far lighter and a contemporary kit model such as the Ajax (oz1368) was probably lighter and far weaker. The performance of these models in vintage contests in recent years shows that their strength is adequate. Taking the last part of the name - stick model. A stick model was one that did not comply with the fuselage cross section rule. (Perhaps I should explain that a model with a stick for a fuselage, like you see in the toyshop, is a spar model!). A designer who ignored the cross section rules was considered a dubious character indeed. I exaggerate only a little. It seems strange now but it really was difficult in those days to go against tradition and build a stick model of this type and this accounts for their slow acceptance at first.

So, why do I consider these models to be significant? Well, previously we had avoided long fuselages because they would be so fat. When we eventually overcame establishment prejudices and built a stick model we made the fuselage (and thus the moment arm) longer and we made the tailplane bigger. Another feature of these models was the rubber motor finished partway down the fuselage instead of going right to the tailplane. This gave a shorter nose and a longer moment arm in any given fuselage length. Whilst we were casting aside convention we also gave our creations sufficient dihedral.

WHAT WE NOW HAD, PROBABLY FOR THE FIRST TIME IN OUR LIVES, WERE STABLE AEROPLANES. If you did not live through those times it is difficult to appreciate the transformation. We had aeroplanes that could be trimmed easily, that were tolerant to being a bit off-trim, that could handle power, that would benefit from any thermal that was around. They were the stuff of dreams compared to the twitchy clunkers which were around before. (The affinity for thermals could have been a problem because you needed a new aeroplane every few weeks - but they were simple to build!)

It was often thought that these models only flew better because of less drag from the thinner fuselage. This was patently not the case because, later, many were built to the fuselage formula for specific competitions and they
performed in a similar fashion. What they all had, irrespective of the fuselage cross section, was sufficient tail volume and sufficient dihedral for stability and, of course, a folding prop to improve the glide.

Experts will make anything fly, as proved in modem vintage events. Certainly there were experts around in the 1940's who made basically poor aeroplanes fly but most of us were youngsters who lacked experience, skill and time. For us these lightweights were the Ford Model T of the modelling world bringing good performance to the masses with a cheap, simple, reliable machine." 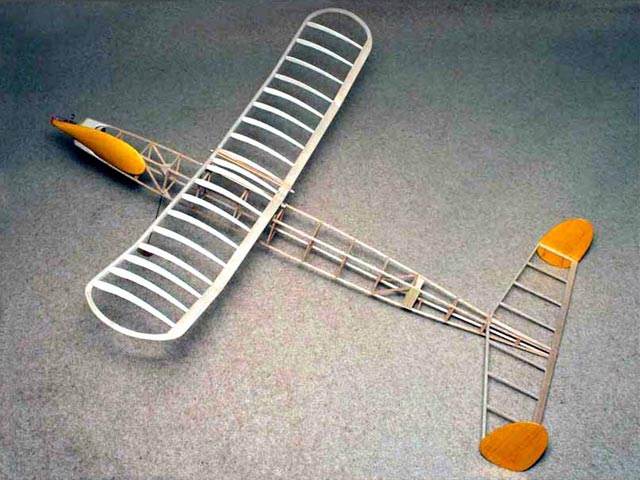