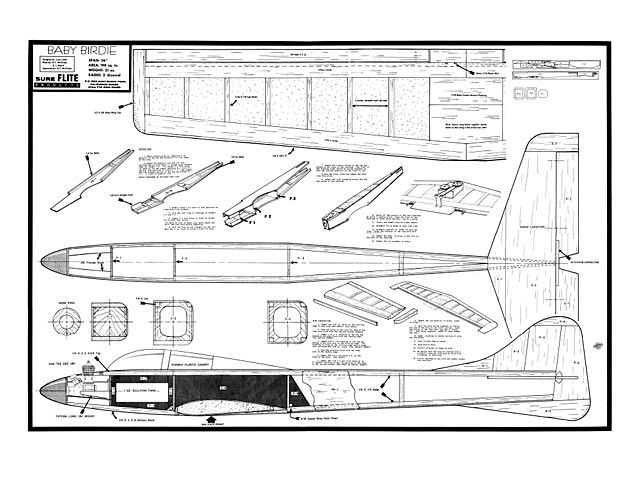 This is a reduced-size version of the classic Dirty Birdy (oz4915) pattern plane, first designed by Joe Bridi.

Note this kit featured wings built up around a foam core, so no rib parts are shown.

Quote: "RM Review: Peter Miller gets to grips with this fabulous fledgling from Global Models - a scaled-down F3A Aerobatic model for .049 to .074 engines and 2-4 channels of micro R/C .

Global models, imported by Ripmax, offer a range of kits which cater for the small model enthusiast at reasonable prices. I was looking for a good aerobatic model for a small engine and so I decided to try the 1/2A Baby Birdie which is intended for engines between .049 and .074. The Baby Birdie is a scaled down F3A Aerobatic model with sleek lines, a tapered wing and simple construction; span is 37 inches with an area of 200 sq in.

What's in the box: The kit comes in a very colourful box with an attractive picture of the model. Inside the box, the important part, there are several bundles of wood wrapped in bubble pack - I like that because I use it for wrapping receivers and battery packs. There are several small bags containing various smaller pieces of wood, the canopy and some hardware.

The plan is rolled which is a nice touch and the instructions are very complete; each item has a box to tick off as the operation is completed, two boxes for each stage of the wing.

The hardware, or lack thereof, is my first complaint. The larger Birdie Ten comes with a standard 15 size engine mount. This kit has no mount and the instructions tell you to buy a CB Associates Long 1/2A mount which you can't get in this country! I ended up using a Cox Queen Bee mount because it fitted the engine that I was using but it does not fit a TD 049. There are a couple of methods to overcome the lack of the correct engine mount. One could make up a 1/4 ply plate and fit it between the nose ring, sides and front former or one could move the front former forward but this would involve a lot of reshaping. The instructions include a list of extra items needed - the engine mount is not included in this list, nor is the 1-1/2 in spinner. Oh well, you can always make another trip to the model shop.

The only hardware was two small horns with no screws to attach them and two aileron horns with the plastic bits to take the clevis missing. Finally some quite nice moulded hinges. I am not particularly impressed.

Wood quality is variable, the main spars are soft but that isn't serious as the leading edge sheeting is hard and so is the trailing edge sheet making the spars virtually superfluous. Not a very good wood selection.

The die cutting is acceptable, most of the parts fell out with a gentle push and only a few needed help with a scalpel.

Let's see how it goes together: I followed the instructions carefully - I always do this with a review to see if there are any shortcomings in this area. The tail components are built first. All the parts fitted well but I found that the strip was thinner than the diecut parts so lots of sanding there. Be warned, all strip is cut to length - if you have to cut more than a fraction of an inch off, then it is the wrong bit of strip.

The wing is next on the agenda. and again it all fitted quite well but the spar slots are a little too wide and one or two of the ribs are slightly out in length. I glued the TE strip down before fitting the ribs to give a more positive alignment.

Following the instructions, with the above exception, everything went together easily. The LE sheet fits between the LE and the spar which calls for some very careful trimming of the sheet. Quite frankly I can't see why they have to do it this way; going over the main spar is simpler and stronger and would add insignificant amounts of weight.

All went well until I came to the tip blocks. These were 1/8 too thin so I had to add some scrap sheet. Careless. The next, and much more serious problem, was found when I tried fitting the ailerons. These were 1/16 thinner than the TE of the wing. I planed the TE sheet down to 1/32 top and bottom and things looked better but once more, I was not impressed.

Now to the fuselage; it is simple, strong and looks neat. Not only that, it all goes together with no problems at all. I did make one small modification. The spinner ring is glued to the front block and sides; the sides are only 1/16 which will leave some very thin areas when sanded to blend with the ring so I added some scrap 1/8 to the sides at the nose. They really should have added 1/8 doublers in this bay as well, it would not have added to the cost.

I planned to fit an MP Jet .061. The recommended tank is a 1 ounce unit which would not last very long with the chosen engine but I found that a two ounce tank fits nicely..." 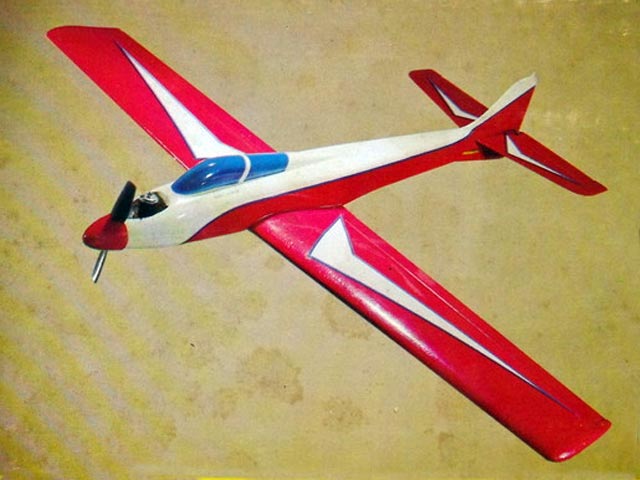