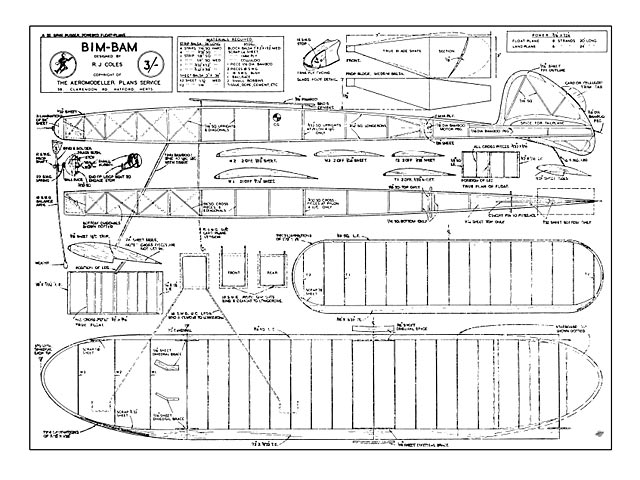 ONE SQUARE FOOT for lightweight wing area is just enough to provide a good ratio of size against performance for a rubber powered model and this product by RJ Coles fills the bill to perfection. With the three-minute flight maximum in vogue, Bim-Bam, a dual purpose float or landplane of only 32 inches span, can put up just as good a show as many a far bigger model. All up weight of 31 ounces as a floatplane and a half ounce less with a peg leg does not necessarily mean that it calls for the most expert construction. On the contrary, any modeller capable of butt joining two pieces of balsa, will find Mr Cole's simple structure a very easy job which can be completed in a week of evenings.

The original model was built especially for the Model Engineer Exhibition 1951, with the intention of flying it afterwards as a landplane version. It won top junior award. (Photograph in January 1953, Aeromodeller.)

The model also won the club's junior contest with a total time of 7 min 15 secs. A few weeks later the Bim-Bam came third in a rally at Chobham, and a few days after this, flying on about 100 turns it hit colossal lift and went away for only 5.33 - and by the way it was going up one might think it would never come down.

Fuselage. Start with the laying all longerons and fitting cross-members over the plan. Only point to watch is that the wire parasol does not distort the framework. A good fillet of cement should be adequate to hold it in place, but if you are of the type who would rather bind it in, do so, only to the longerons because if the model should get following a 'prang' and the parasol has reason to move, it will not pull half the cross-members out. Make sure the floats are rigged at 10° and are 12 in apart, (outside measurement) and 8 in inside measurement.

Wings and tailplane: pin down leading and trailing edges and have all ribs fitting freely without any tendency to bend. All joints are butt joints leaving the leading and trailing edge spars free without slots to weaken them. Do not use too much cement per rib, as this also tends to bow them and the section becomes uneven. The tailplane is built on exactly the same principle as the wing.

Trimming. Start on 100-150 turns after checking that the glide is shallow, and trim under power to the right and on the glide to the left. Trim for a slight stall in straight glide, but counteract this by applying the turn. The original model needed 3/32 in side and 1/16 in downthrust. On a maximum of about 800-850 turns (note the different power used for each version - see plan) the model should climb rapidly to about 400 ft in either a straight fast climb or a series of Immelman rolls.

The float-plane version is basically the same, but do first flying tests over long grass - water should be avoided at these early stages, as a ducking will stop flying until the model has been drained out. In the event of water getting in, a pin-prick in the covering, and only a pin-prick will allow the water to run out. " 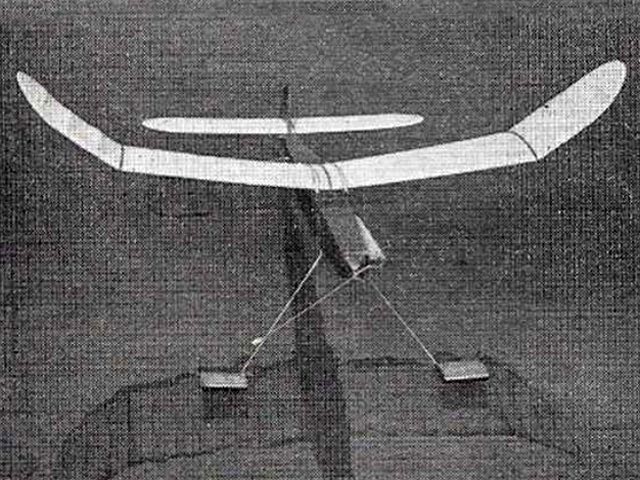