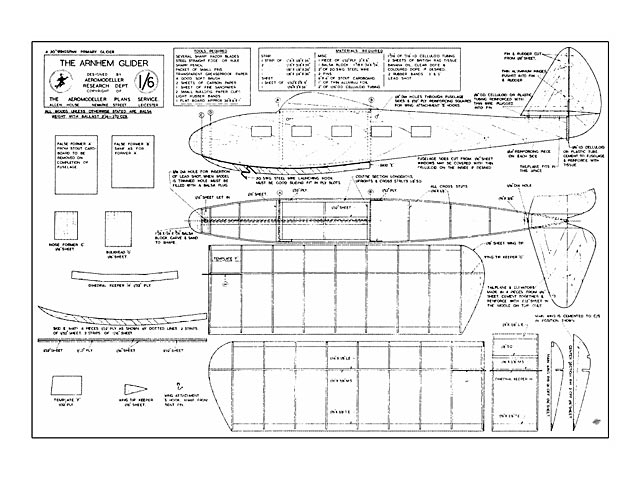 Quote: "The Arnhem Glider. A model designed especially for the younger enthusiast by the Aeromodeller Research Department.

Above is the prototype going up on the line as steady as a rock, whilst below the model glides steadily in to land on the snow at Eaton Bray,

Fuselage Construction. Study the plan and building instructions carefully before attempting any construction. The two fuselage sides are cut with a razor blade front medium sheet balsa 1/16 thick. First, lightly sandpaper the balsa smooth. Next, place one strip of sheet balsa under the side elevation drawing of the fuselage with carbon paper between the plan and the balsa sheet. Carefully trace the shape of the side on to the balsa, including cabin windows, top and bottom cross strut positions and vertical and horizontal fuselage stiffeners.

Cut out the fuselage side with a razor blade. Check it against the plan, then using the first side as a template, mark and cut the second side. After cutting out, place one side on top of the other and make certain they are exactly the same shape. Cut the vertical stiffeners and horizontal stiffeners from 1/8 by 1/8 strip balsa, and cement them accurately in place on the inside of the fuselage sides. (Check which is the inside.)

Assembling the Fuselage: it is difficult to assemble the fuselage accurately without using some form of jig to hold the framework rigid while the cross struts, etc are cemented in position. A simple jig can be made by cutting two rectangular false formers (A and B) from thick cardboard. Pin these jigs between the fuselage sides immediately in front of the forward vertical fuselage stiffeners and immediately behind the rear vertical stiffeners. These pieces must only be pinned and not cemented in position as they are eventually removed. When the false formers are pinned firmly in positions cement the extreme rear ends of the fuselage sides together, holding them till dry with a small bulldog clip. Next cut the nose former C from 1/16 sheet balsa and cement it in position, using pins to hold it until the cement has dried.

With the false formers in position and the front and rear ends of the fuselage cemented together, the fuselage sides take a natural curve from nose to tail. Cut in pairs the remaining cross struts, and cement between the fuselage sides, passing tight rubber bands round the fuselage at the strut positions to hold them firmly until the cement has set. When all the cross struts are in position and the cement has set, remove the rubber bands and the two false formers A and B. The ballast container is fitted in the nose of the fuselage immediately behind the nose bulkhead. Cut two crosspieces from 1/16 sheet balsa and cement them in place. The bulkhead D from 1/16 sheet balsa, is cemented to the rear edges of these crosspieces and the inner sides of the fuselage. This forms a box, to take lead shot used for trimming the model, the shot being inserted through a hole drilled in the top crosspiece.

The nose block is made from 3/4 in block balsa. First cut the block to fit the face dimensions of the nose bulkhead. Cement the block to the front of this bulkhead, then shape with a razor blade and finish with sandpaper... " 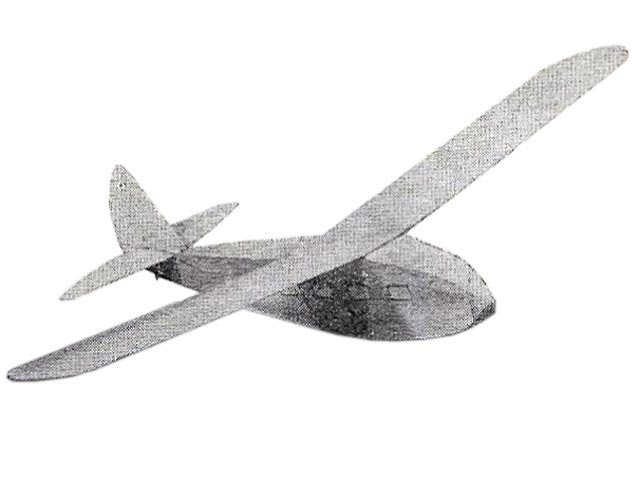