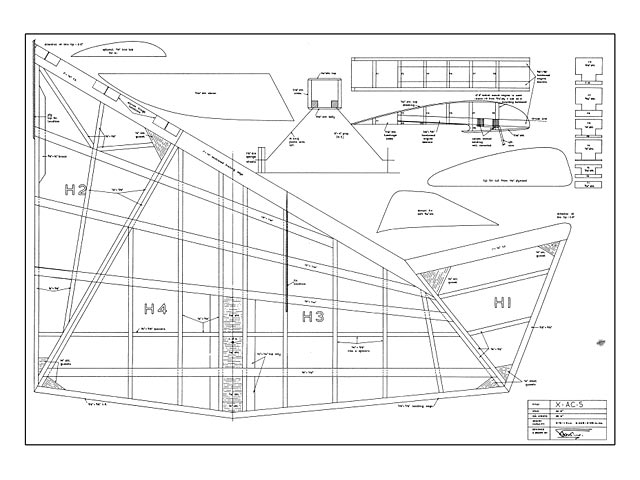 The experimental MK 5, X-AC-5 for short, is the culmination of several years design and development work in the field of asymmetric configuration free flight flying machines. The X-AC-5 is ultra stable and can be flown in strong winds, once it has been correctly trimmed. Stall recovery is faster than for orthodox layouts.

Design: The X-AC-5 was designed to combine the excellent lateral stability of a flying wing with the longitudinal stability of a medium moment-arm orthodox machine; and at the same time provide an extremely light and robust structure. Induced drag on the starboard tip and elevon is reduced by a large tip fin, also affects directional stability. The X-AC-5, due to its low wing loading, is fitted with a self-stabilizing 'flat plate' type airfoil section; this has proved very effective in practice and is also very easy to build.

If the wing loading was increased, by fitting RC for instance, it would then be necessary to incorporate an asymmetric reflex type airfoil section. The CG of the model is on the thrust line of the engine and located 4.5 in back from the leading edge of the wing. Considering the areas H1 (port tip), H3 (port center-X), H4 (starboard center-X) and H2 (starboard tip), the line joining the centers of pressures P1, P2 of H1 and H2 is behind the line joining the centers of pressures of H3 and H4, thus providing a longitudinal correcting moment about the latter.

It will be apparent that as F2 > F1; in order to ensure that the equation (i) holds true, it is essential that m1>m2. Similarly for areas H3 and H4 to produce equation (ii). The foregoing is not intended as anything like a complete design analysis, but merely to give the builder an idea of the basic concept. It can easily be seen from the equations (1) and (ii) that the center of pressure of the entire machine lies on the thrust line and behind the C of G..." 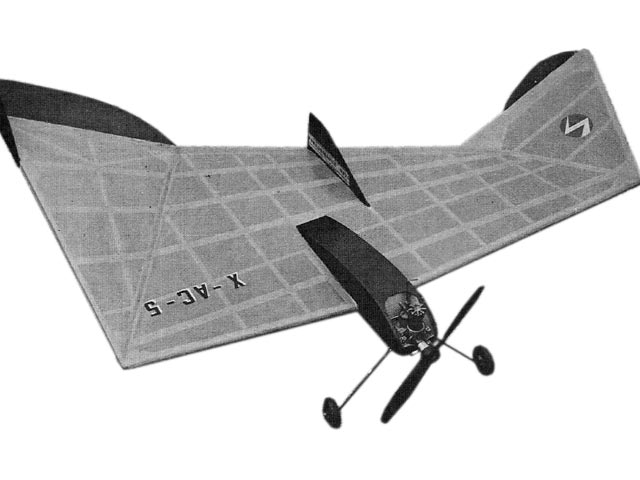