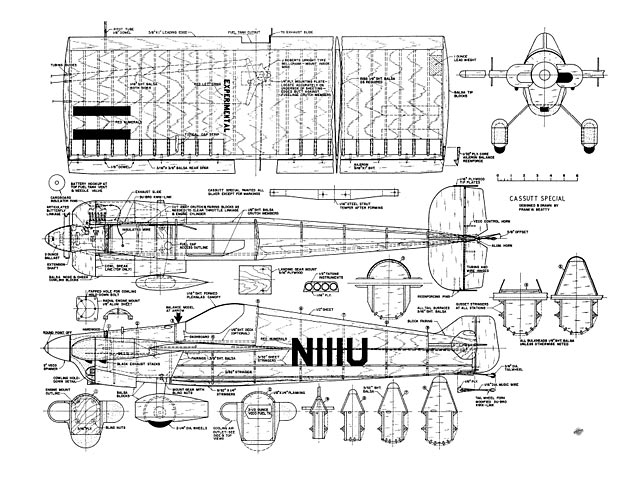 From the beginning, air racing has been an unlimited free-for-all event, taxing men and machines to the utmost in a celeaseless quest for speed. The most powerful engines available were mated to the smallest of airframes, often with little regard for safety to gain precious extra mph. No risk was too great to take, no airplane was too dangerous to fly, if a race could be won or a speed record established. Men risked their fortunes and their lives chasing that elusive mistress - speed.

In the late thirties, it was becoming apparent that the lone individual working on a shoe-string budget, who had contributed so much in the past, was on his way out. Only well financed groups could hope to master the technical problems facing those who would better the marks already attained. Then, all air racing ceased during World War II. Racers following the war were all modified war surplus craft that could be bought at giveaway prices. Even at these prices, the cost of participating in these races was frightfully high, and what individual or group could hope to field better craft than those developed by a nation geared for war.

Even before the war, some pilots were suggesting that a new class of midget racer be established. Following the war, a committee of the most famous race pilots of the era recommended a set of specifications covering the design, construction, and flying characteristics of the airplane as well as the pilot's qualifications that were adopted in 1946. Goodyear Tire & Rubber Company agreed to sponsor races for this class for three years and the new class of race plane thus born rapidly became known as Goodyear Racers. These rules fostered safe and sane practices and they allowed the 'little guy' to get back into competitive air racing. A new family of tiny, sleek, fast planes became famous to air race fans.

In 1958, after twelve years, improved materials and techniques allowed one rule, the 500-lb minimum weight, to be dropped. A second generation of Midget Racers, even tinier and lighter than those earlier machines, sprang forth. Lightest of the first new 'light-weights' was the Cassutt Special II designed, built, and raced by a 12,000 hour TWA veteran, Capt Thomas H Cassutt. Tom Cassutt had already gained considerable fame with his earlier designs. But this new racer was a truly tiny craft that weighed just 444-lbs and sported a very thin wing, only 3-1/2 inches thick, that spanned just 13-ft 8-in. This new mount was clocked at better than 205-mph at the National Championship Races in 1959 and has proved to be a top contender in its class.

A model of this tiny ship must be built to a large scale if it is to be more than watch fob size. Even though scaled to 2-3/16 inches to the foot, our model still only spans 29 inches. Sounds smallish, but a 10.5 in wing chord gives us more than 300 square inches of wing area and our throttle-equipped Fox 35 is completely enclosed in the cheek cowls of a 34 in fuselage. The extremely thin wing (true scale thickness 9/16), very small tail surfaces and closely cowled engine were matters of concern prior to testing, but all fears have proved groundless. No engine cooling problems have come up even in our hot, dry midwest weather.

The ship was sensitive and hard to manage on its maiden flight. Two ounces of lead ballast hidden in the spinner shifted the CG forward just 1/4 inch and now the model flies smoothly and stably. This seems to indicate that the thin wing-small tail combination is unusually sensitive to shifts in the CG position. This is no problem, however, if the model is balanced AHEAD of the critical point.

All up weight with ballast is 42 ounces. Model is silver, with red markings. Contest minded builders can find a 3-view of the Cassutt in the May 1962 issue of Sport-Aviation. Send 50c to Experimental Aircraft Association, Hales Corners, Wisconsin for that back issue.

The wing, tail surfaces, and landing gear assembly are built first so construction is not held up when these parts are needed.

Start wing construction by cementing several widths of 1/16 sheet balsa together to make two skins approximately 9 in wide and 29 in long. Trim bottom skin to size and mark rib positions. Cut 26 ribs of 1/8 sheet balsa and cement these in place. Make trailing edge of wide enough material (3/16 x 1-1/2 in) to include both rear spar and ailerons. Ailerons can be cut separate for added realism after wing has been carved and sanded to final size. Cement leading and trailing edges to wing assembly..." 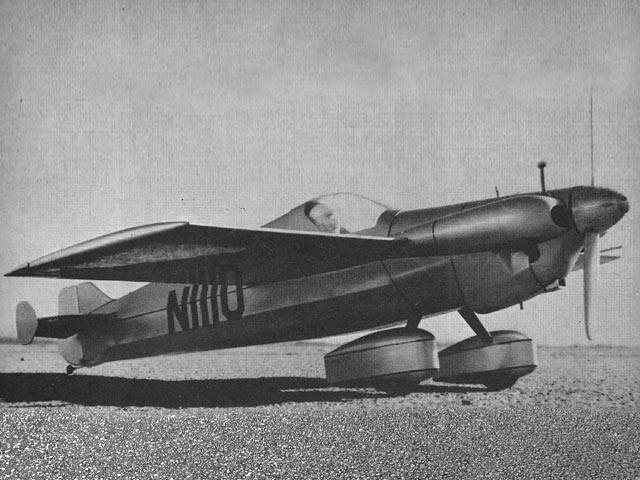 What about metal skins
skeatesy - 20/04/2021
Greetings, As I recall, Cassutt wings were all wood, with plywood skins. Later versions had thicker wings. Racers could still build it with thin wings. Top speed dropped, but low speed handling and stall recovery improved. I think the fin and rudder were enlarged, because the elevator end plates were removed. A lot of speed on little power. And this was when the little Continentals were rated at 85-90 hp. Let’s be careful out there.
James Hickman - 20/04/2021
Add a comment