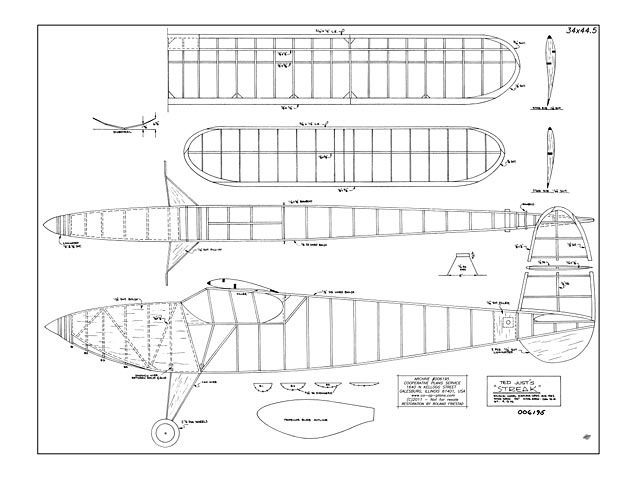 Quote: "Fly the 'Streak' to Victory. One of the most consistent flying contest fuselage models ever to take wing - How you can build and fly it. By Ted Just.

HERE is the model you have been looking for in preparing for that next contest. It is easy to build, a pleasure to fly and a super contest performer.

The original flew right off the drawing board. Its large size gives a majestic attitude in flight. Under the initial burst of power it climbs steeply up and straight away; as the power becomes less, the right turn becomes tighter and the model slowly glides over head.

The one bladed prop has no hindrance to the glide but gives a superior climb, and incidentally is easier to construct because you need not tinker with a hinge or have trouble finding a correct folding position. The landing gear absorbs all the shock but is still rigid enough to allow those realistic landings every time. A large stabilizer is used to lift the model up after the initial zoom which is so steep as to cause most models to stall.

In Cleveland last summer, at a time when no other models were staying up on thermals, the original was lost out of sight due to its ability to withstand strong winds and pick up the slightest thermals. Since then another has been built and test flown perfectly without a bit of adjustment needed. So get ready to build one yourself; you can be assured of the same kind of perfect flying if you will follow the plans carefully.

Construction: Begin construction of the model by first making full size drawings of the various parts. The plan is one-quarter actual size, so with a pair of di-viders the new drawings can be quickly made.

Fuselage: Select four hard 1/8 square balsa pieces for the main longerons. Start the actual construction by building one side of the fuselage on a flat surface. Next build the other side directly on top of the first so that the two are identical. Upon drying they are split apart with a razor blade and placed parallel to each other but perpendicular to the working table. The cross braces are then added, first at the wing mounting section, while the sides are pulled together at the tail and the nose braces added. The remainder of cross braces are now added, also the nose formers and 3/32 square balsa stringers.

The landing gear wires are next formed; the front being from 1/16 diameter steel wire and the rear brace from .040 wire, long enough to slope forward and be bound to the front wire by thread.

The wires are held in the fuselage by sandwiching them between balsa at the top and gluing while under pressure in a vise. The landing gear wires are filled in with 1/16 sheet balsa, and the union between the balsa and wire covered with silk to prevent splitting. Small wire hooks to hold the wing attachment bands are next glued in place as well as the bamboo piece just aft of the wing mount.

The nose is now completely covered with 1/32 sheet balsa. It is held in place with pins while drying and sanded to a smooth finish afterwards. The balsa nosing is made by laminating 5 pieces of balsa, the first three forming the nose plug and the other two being permanently cemented to the body. The window fairings are now added, also the rear plug filler. A piece of aluminum sheet is cemented on the inside of the rear filler to protect it..."

Note this plan is stamped as Archive #006195 from the Cooperative Plans Service. See their website at www.co-op-plans.com

Update 23/03/2019: Added a further 3rd missing page of drawings (many thanks to Pit) to the article_2 file. This shows full size parts. 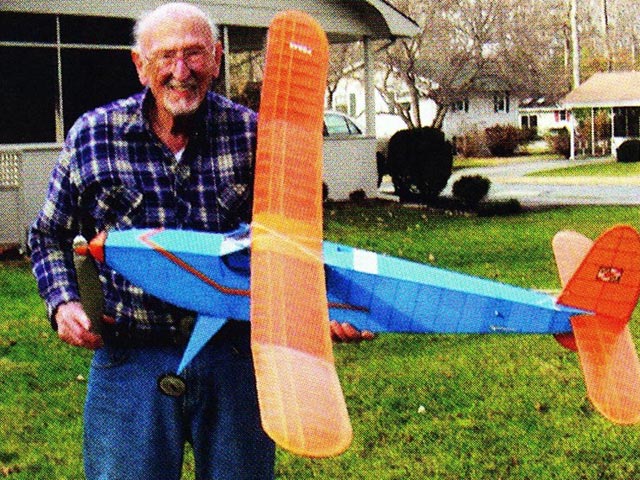 Does anybody have the propeller block details for this model? Only the blade outline is shown on the plan. The propeller block would have been shown either on the original magazine plan or as a separate drawing in the article. It would be really helpful to have.
Simon Blake - 22/03/2019
Simon, I have added 'article_2' file which is a scan of the missing 2 pages of drawings that came with the article, as published in 1942. There is a little bit more info on there, but it looks to me like it is mainly just on how to shape the blank for carving the single bladed prop. Hope that helps.
SteveWMD - 22/03/2019
Thanks Steve; that's a big help. The propeller block dimensions are shown at the bottom of the second page that you added.
Simon Blake - 23/03/2019
Add a comment