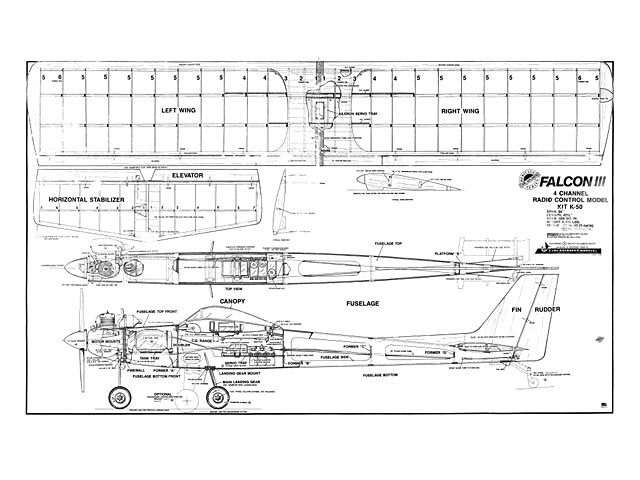 Quote: "Looking back, you will learn that the Carl Goldberg Falcon 56 (oz2424) has been an integral part of R/C modelling history. Its design broke new ground and it was, for many years, the 'standard' in sport aircraft. In 1976, the 'Liberty Bell', a Sr Falcon (oz6137) piloted by Bob Rich, was flown coast-to-coast in commemoration of the United States Bicentennial. That aircraft then went to the Smithsonian Institution, becoming part of its permanent modelling collection.

As technology improved, so did each new version of the Falcon and over the years, many thousands of modelers have learned to fly with and deeply loved this classic aircraft. Here, Carl Goldberg Models proudly brings you the FALCON III - a model which retains its legendary flight heritage, yet incorporates the simpler construction techniques of today's Goldberg kits. We know, as you build and fly it, you will enjoy becoming a part of the Falcon tradition... "

The manual is available for download from the Great Planes site at http://greatplanes.com/manuals/discontinued.php

Quote: "An FM Product Review: Carl Goldberg Models' Falcon 56 III, by Bob Hunt. Generations have learned to fly R/C on this venerable trainer. It's still as fresh and valuable as ever in its third updated version.

I've said it before in print, but it bears repeating: no one has produced more legendary designs than the late Carl Goldberg. Carl had a knack of knowing exactly the type of model needed by the mod-eling masses at any given time, and the talent to produce it in an easy to build, quality kit. That's always been a trademark of Carl Goldberg Models, and I'm sure Carl would be proud of how the company's continued in the traditions he established.

Recently, Carl Goldberg Models released an updated version of their all-time favorite advanced R/C trainer/sport design, the Falcon 56 (oz2424). Actually this is the second revision of the popular design. I remember my first glimpse of the Falcon 56. A close C/L Stunt buddy, Bill Simons, decided to see just what all the excitement was about concerning this R/C craze back around 1967, and purchased the hottest R/C trainer on the market.

Unlike most of the trainers available at that time, the Falcon 56 had a sporty look about it, and featured a very aerobatic semi-symmetrical airfoil. The rest of the primary ships on the market featured high-wing configurations and flat-bottom, lifting airfoils. The Falcon 56 could be built as either a three channel trainer with extra dihedral, or as a more advanced trainer/sport ship with minimum dihedral and full four channel function. Bill opted for the three channel version, and assembled the kit in what seemed like but a few hours. With it he learned the rudiments of R/C flight and even went on to basic aerobatic maneuvers. His next plane was a four channel pattern type design, and it was a success for him because of the good training he received with the Falcon 56.

Several years later (1981 to be exact) I found myself bitten by the R/C bug as Bill had been. I also chose the Falcon 56 as my first model, only now it was the Falcon 56 Mk II (oz6155) version. It seems that the original wing design, while easy to build and aerodynamically successful, wasn't up to the challenge of the stresses being applied by the modern Schneurle engines. The higher speeds and greater loads were snapping the old design wing too often.

Carl researched the problem and found that by adding a 1/8 x 1/4 in basswood cap to either side of the robust I-beam main spar, a tremendous amount of strength was gained. I've never heard of any of the Mk II wings folding. While he was updating it, Carl added a larger, more stylish swept fin and rudder in place of the smaller, straighter, original unit. The landing gear mount was also beefed up, and the Falcon II was born.

I built my Falcon II as a four channel ship, and powered it with a hot Enya .40 Schneurle engine. The combination worked great together, and with the coaching of Frank Granelli, I soloed on my third flight. Several days later I tested the strength of the new wing by dumb thumbing the Falcon II full bore into a hill at the edge of our local field. The total damage was a break in the rear of the fuselage, some cracks around the wing mount area, a couple of splits in the covering, and a broken prop. The ship was back in the air the next day.

I went on to learn all the rudimentary maneuvers with that model, including loops, rolls, stall turns, Cuban Eights, inverted flight, and even spins - once we added some tail weight. My very next ship was a hot pattern design, and like Bill's experience years earlier, I found the lessons learned with the Falcon II helped me to handle the high performance model easily.

Now the story has come full circle. A little over a year ago my youngest son, Brian, expressed an interest in learning to fly radio control, and he asked me if we could build a trainer for him. Ironically that request coincided with the release of the latest update of the Falcon 56. Now a part of the Carl Goldberg Heritage Series, the Falcon III has been tweaked in just the areas where even minor problems had been noted, and the result is yet another instant classic.

The fuselage on the first two versions of the Falcon were built-up balsa assemblies. They were light, but were prone to break in even mild ground encounters (as mine did!). The Falcon III features an all interlocking 1/8-inch thick light ply (poplar plywood) fuselage which is extremely strong and easy to assemble. The first two Falcons featured a removable top hatch to allow access to the tank compartment, but that also made the assembly weaker than it might have been. The newest version has no removable cover, and it is very rigid in the nose area as a result. The tank is installed during the assembly of the fuselage, and it can be easily removed for servicing through a hole in the first fuselage former.

To further update this grand old design for the 90s, a bolt-on wing was added to replace the ancient dowel and rubber band method. Tail dragger landing gear is becoming popular once again, and the plans for the Mk III show an optional tail gear installation. What they didn't change was the always great flying characteristics of the design..."

Quote: "I left a comment on the aileron torque tube bend direction. The booklet on your site shows the bend in the wrong direction. I have an old booklet from about 20 years ago that shows the correct bend direction. Attached are scans of the incorrect and correct images. Sam"

Quote: "Good morning. Back in 1996, my wife bought me my first RC plane, the Falcon III. I built it, and learned to fly on it. I have flown other trainers, and none were as sweet flying as the Falcon. Unfortunately, a few years later I had a battery failure and it went freeflight until it ran into a rocky hillside. I have always missed that plane. Recently, I got a NIB kit of the Falcon. This kit is the newer one with the laser cut wood instead of the die cut on the first one I built. It's on the bench, going together fine. Since I had built one before, I was able to catch the error in the torque rod bend direction.
After I sent the correction on the aileron torque rod bending for the Carl Goldberg Falcon III, I decided to scan the original manual and all the parts also. The plans on your site don't have the formers, rib profiles, etc, and I wanted this information to be there for anyone to build this wonderful plane. Thank you so much for preserving these plans. Your site is a Godsend. Sam" 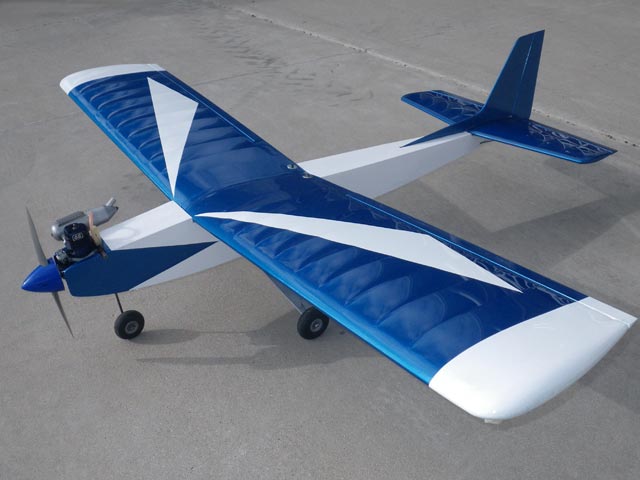 Please note in the instruction booklet, there is an error on page 14 and page 15. When bending the aileron torque rods, the threaded end angles forward while the 90 bend that goes into the aileron points backward, see the plans side view. Strange thing, I have another instruction book from about 20 years ago, and it is correct. For some reason they redid it and drew the bending instructions backwards.
Sam - 07/12/2020
Here are a couple pictures of the Goldberg Falcon III I made the scans of the parts from [model pic, 007, 008]. First plane I have made in about 15 years.
Sam - 28/01/2021
Add a comment