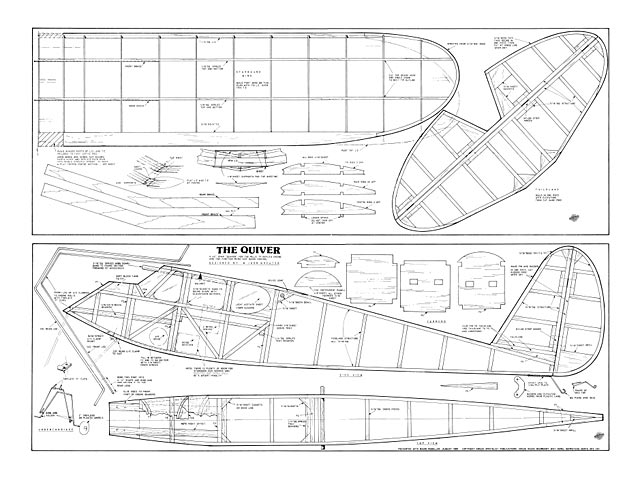 A few years ago I was loaned a Mark 1 Mills 1.3. Loaned? Dear Eric, he's hardly likely to see it again. I also scrounged a half-built original Mercury Matador (oz9013). The two, combined with one servo, have given many hours of relaxation. Real aeromodelling necessitates tissue and dope!

I have also spent many happy hours with one of the late Ben Buckle's Joe Elgin Playboys', a design that can out-perform all of the 100S gliders I have built over the years. The 'Playboy' has been fitted with a variety of engines but all were of the glow variety, never a diesel.

I had read of the new Irvine Mills .75 but after some experience of an Indian Mills 1.3 I was sceptical towards its quality. The timing of the delivery of the first stock of Irvines in my local model shop directly coincided with Peter Chinn's report in the Radio Modeller. Convinced by such a worthy engineer I bought one and blow me, my purchase also coincided with someone part exchanging an original Mills .75 into the model shop. I paid £6.00 for the used one! Both ran virtually first flick but the new one appeared to have the edge on power even before running-in.

So, accepting that nostalgia ain't what it used to be, I needed a design for my new toy. I have built a good many of the designs in the free plans series of this magazine and the other ASP journals over the years, and have carefully stored those that I haven't built. There are many suitable for the little engine and two function mini gear, the half-size 'Rudder Bug', the Little Little Vagabond (oz6611) and the 'Little Little Ship' to name but three. Somehow, none inspired.

A couple of years ago my son built a Quaker Flash (oz5516), but quickly became bored with it (he's an aerobatic fanatic). I rather think that it is the prettiest of all the pre-war designs so I decided to scale down the plan. At first I thought that half-size would do, but dismissed it as soon as I had drawn it as being too small. After many flights with the two thirds size shown here I can honestly say that you are unlikely to do better for the Irvine Mills. The low drag of the pencil slim fuselage and efficient high aspect ratio wing gives the machine excellent glide characteristics. So far I have used only the integral tank which gives an engine run of about two minutes and rarely less than three minutes on the glide in still air.

Construction. As one of the old school, I firmly believe that no-one should be allowed near a radio model until he has proved that he can build and trim a free flight model. If you have built a 'rubber job' or any traditional airframe, you will have this built in a week of evenings. If you have only been used to the glass and foam variety of model, give yourself a treat, see what real aeromodelling is!

Fuselage: Build the first side over the plan, cover it with cling film or the polythene backing from some Solarfilm (you do save it for this purpose, don't you?) and build the second side directly over the first. Take great care to select the balsa strip so that both sides have a similar flexibility, that way you can bring the sides together without the banana flavour a lot of fuselages have. There are no plywood formers, balsa is quite strong enough for this size of model, so you don't even need a fretsaw. Take care to ensure that all the joints are a good fit and use white glue in the construction.

Wings: The only departure from normal modern construction is the reed tips. You can, of course, substitute balsa tips, but if you take the trouble to seek out an arty crafty shop that sells reed you will enjoy the simplicity of its use. Cut it slightly over length and soak it in warm water for a few minutes. Use white glue and pin it over the plan to conform with the shape shown then leave it overnight. Add the gussets and trim the leading edge and trailing edges and you will be rewarded with a light, strong tip..." 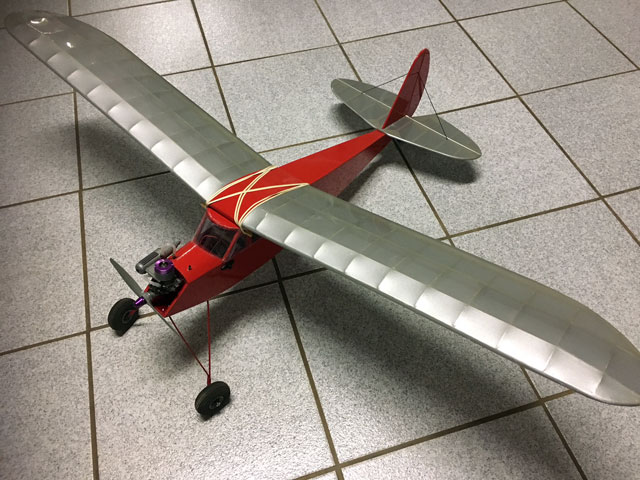