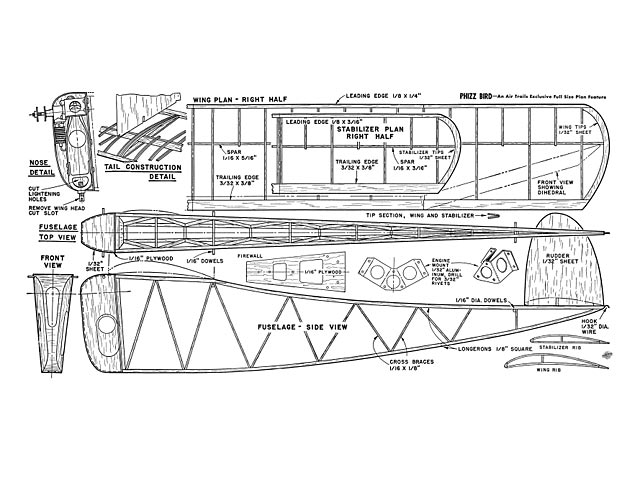 Quote: "This is one of the most remarkable models to appear in the new carbon dioxide power class. Phizz Bird, by Caldwell Johnson.

AN ENTIRELY new category in model competition was opened when the Herkimer Tool and Model Works introduced its carbon-dioxide gas-powered engine last year. After experimenting throughout the winter and spring, many new models are making their appearance on the flying field.

The Phizz Bird, by Caldwell Johnson, is a striking example of the simple and quickly built designs that can be turned out utilizing the CO2 engine. In fact, the model is so well engineered that little is required in the way of explanatory text.

Mr Johnson is one of the many well known modelers employed by the National Advisory Committee for Aeronautics at its Langley Field, Va, laboratories. He works in the engineering section with such noted flyers as Joe Dodson, Frank Parmenter, and Charles Folk - to mention only a few. Unlike many of his fellow NACA modelers, the designer of the Phizz Bird is a native of Hampton, Va, the community adjoining the vast Langley Field labs and airport.

In the 1940 National competition, Mr Johnson captured the Stout outdoor trophy and at the same time qualified for a position on the international Moffett team. The following year at the Nats he placed high in both the rubber-powered and gas model categories.

The designer considers the CO2 engine one of the most important advances in areomodeling, coming as it does as transitional power between rubber and standard internal combustion fields.

Construction of the Phizz Bird wing and stabilizer is borrowed from the indoor builders. Templates are made of top and bottom sections of each and 1/16 deep ribs are cut out of 1/16 sheet balsa stock. The wing gussets at the dihedral break are made from the same stock. Trailing edge of the wing and stabilizer is 3/32 x 3/8 stock. The balsa prop recommended is 8 inches long, and a two-bladed folder popular with rubber models has been found best.

The fuselage is made of 1/8 square longerons and cross members 1/16 x 1/8 standing on edge cross-wise. With both sides made, connect them with similar size cross members following the inward slant dictated by the plywood motor mount.

Beginning CO2-ers are urged to build the model as it appears here in plan form. This wing has approximately 135 square inches of area. Ready to fly with the gas cartridge, Phizz Bird will weigh between 3-3/4 and 4 ounces. It is covered with rubber model tissue, having one coat of clear dope.

The model may be adjusted to climb to either the left or right; the important feature is that it should glide in the same direction as it climbs.

For the advanced builder, the following is recom-mended: Build a wing of about 170 square inches. Lighten the engine by filing down the crankcase to thin it out. Drill holes in the cartridge holder to lighten it. Cut off the thumbscrew wings-and-slot the screw shank to take a screwdriver for adjustment.

The gas line can be cut to the shortest length possible and the crankcase back plate removed. Thin down back of crankcase and mount against aluminum holder.

As a standard engine-powered model, or powered by a stripped down motor, the craft should be test-flown on a nearly spent cartridge. " 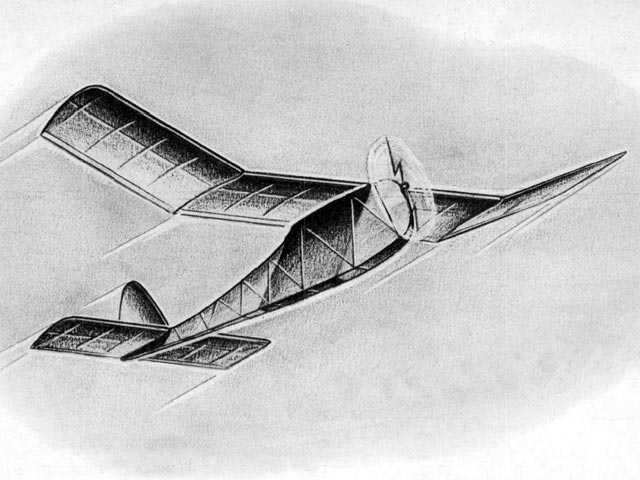