Backbone of United Nations air superiority in the Korean War, the North American F-86 Sabre chalked up an impressive battle record of 11 to 1 kills over the numerically superior MIG-15's. In the crazy-quilt air war of Korea the Sabre was at a definite disadvantage in many respects. Limited to the air space south of the Yalu river, our Air Force frequently had to break off pursuit of the enemy because of this limitation just when combat advantage was at its highest peak.

Notwithstanding slightly inferior performance to the M1G-15 at high altitude the magnificent flying of our Air Force pilots, the radar gunsight and the Sabre made a combination that tipped the balance in favor of the UN forces in the air.

First swept-wing Air Force fighter to fly in combat, the F-86 series of aircraft has been a leader in the jet-fighter field. Ask any Sabre pilot and he will describe the aircraft as one of the finest he has been privileged to fly.

Today the F-86 has been replaced by superior aircraft but it is still flown by National Guard units and as an Air Force trainer and many are being flown by various NATO air forces.

The Sabre chosen for our model is the F-86F, last version to see combat in Korea. Span is 37 feet, length is 37 feet. Power is the P47-GE-27 turbojet engine capable of more than 6000 lbs. thrust, putting the aircraft in the 700 mph class. Many features of the models E and F are similar and much of the data included here applies to both mod-els. Scale fans will note the flat windshield of the F model and the square-sided beaver-tail fairing for the flying tail.

The model was designed from NAA three-views and research of hundreds of photos, so except for departures from scale to accommodate the Dyna-Jet engine, authenticity is assured. Scale outlines of fuselage rear and horizontal tail are shown on drawings. The rear portion of the fuselage had to be enlarged in cross-section to allow ample clearance for cooling the Dyna-Jet. The horizontal tail was enlarged in area as insurance against any control difficulties when flying. None developed, and if the builder wishes he could use the scale tail outline. If one wished to go a step further, the flying tail (whole horizontal tail movable) could be built, but this probably would make the model sensitive to fly. Control movement would have to be reduced and control handle and bellcrank system desensitized.

The model is built to scale of 1-1/8 in equals 1 ft. This scale was chosen to gain dimensions of fuselage large enough to accommodate the Dyna-Jet. Model span is 41 in, length 41 in, final weight is 5.5 lbs and model flies at 90-95 mph.

Before undertaking construction of your Sabre model it would be very helpful to review the article on the Convair XF-92A model appearing in the 1954 Air Trails Model Annual. Features such as engine mounting and insulation are identical and these methods have proved practical in the Sabre model.

Just as the design and construction of real jet aircraft has increased in complexity, similar problems have developed in modeling such aircraft. Model problems are by no means insurmountable, but the methods and structures used in building our Sabre should be strictly adhered to, for a successful model. This Sabre is no slab-sided stunt job, it will take time and patience to build but the result will be something to be proud of.

Construction can be started with the fuselage. It is built on a jig made of 1 x 3 inch pine blocks set edgewise on a plank at each former station. The blocks are screwed or nailed to a 6 in wide plank which should be flat and without warps or twists. See that former blocks are same width so height will be uniform..." 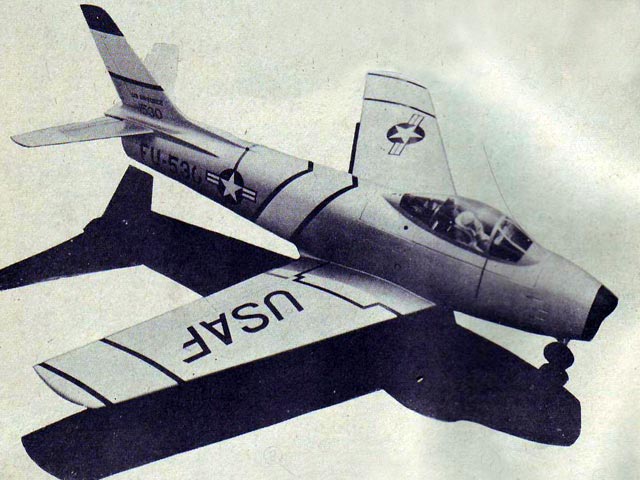