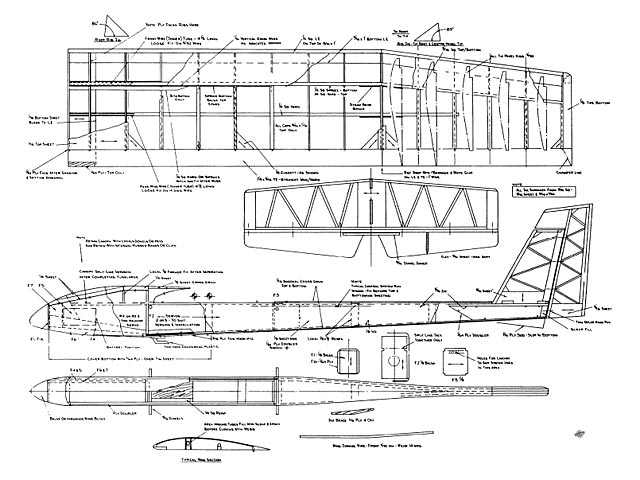 Quote: "This versatile 72 in glider can be built in powered, aero-tow or hand-tow versions. Lazy Kitten, by Harry Gilkes.

Ask an average R/C modeller what does a glider mean, or do, for you? You will no doubt get many answers - ranging from 'I learned to fly on one', or 'relaxed, quiet and clean flying', to 'Oh, those boring things! The latter will no doubt be the club's power fanatic - we all have one. ('It said a 40 on the plan but it needs a 60 really'!) If you ask the question of the editor he will probably say Oh, I could chuck one out of the office window (Lucky s...!).

Well, let's look at the versatility of the particular type of machine presented here. It can be 'chucked off' a hill or used off a normal tow line by experienced flyers - or to give a newcomer a feel of controls. You can add a small motor at the front and it's an ideal machine to 'learn the art' (even better with throttle), or for some relaxed easy way of height grabbing for some thermal flying. I suppose you could always go electric (consult our tame sparks on this one, not my particular field). Alternatively, you can aerotow it - but be warned, this is not for beginners - and only use a slow flying vintage tug.

We have used a 60 inch 25 powered tug - a Junior 60 (oz9995) would be ideal - with a release servo mounted on the CG by fixing it under the wing centre section with a release pin up through the wing (use a similar method as shown on the nose of glider). More later on this subject.

Right, now to the basics of the Lazy Kitten which is a 72 in (1820mm) club glider of simple but sturdy construction, and weighing in at around 27 to 34 oz according to the version and equipment you opt for. It will also take up little room in the car when you go on a family picnic or to the beach and, surprise surprise, there happens to be a hill or cliff where you decide to park! OK, enough introduction, let's start building with the real heart of a glider:

The Wings. This structure is straightforward but let me point out a few particular features. The wing section is almost flat bottomed, except for the front 3/4 in at the LE which is taken care of by the 3/16 x 1 in medium bottom LE. After the usual waxing or covering of the plan build the two centre panels first. This is done by pinning down 3/16 LE, 1/4 sq spruce and balsa spars and pre-notched TE. Add all ribs - note jigs for setting end ribs - top LE and 1/16 LE sheeting, also the capping strips. At this stage do not fit centre section sheeting or 1/16 vertical grained webs.

Next thing is to sort out the wing joining tubes. This is best achieved by lining up the inboard panels flat on the building board. First carefully open out the pilot holes in the root and the two ply faced ribs and, using the tubes in one length, line up and join the panels by sliding on the tubes and pinning down on the board - with a small gap to allow a razor saw in to cut the tubes. When satisfied, lock the tubes in place with instant or rapid epoxy; leave to set and razor saw through the tubes.

Now the inner panels can be completed by adding the webbing between the ribs - as indicated. During this operation fill the space around the tubes with epoxy or scrap balsa and epoxy. The rear tube should be exposed to the rear spar. Finally fit the top and bottom sheeting and fit the ply facing on the root rib.

To complete the wing structure, build the outboard panels - as per inners - notching ribs to suit the main spar and local rear spar; add sheet tip flush with bottom and also small scrap filler at the LE. Now shape and initially sand the LE of all four panels before joining inner to outer. To join, all you need to do is locally slot behind the main lower and rear spar at the mating faces and fit the 1/16 ply dihedral brace. Steam the front in plan view to match the spar plan angles. When satisfied with the joint/angle, finish sanding the wing panels and also reinforce the inner/outer joint at the LE and TE with a strip of bandage or nylon and white glue.

You now have a sturdy, but light, warp-resistant wing. All the wing operation requires now is the bending of the joining wires, the TE local reinforcement and covering. I used see-through gold Solafilm. If you follow suit make sure your construction looks good, or the club critics will descend, nudge, nudge, etc.

Now that completes the 'complicated' bit, so let's tackle the:

Fuselage. This item, which is kept to a minimum cross section without needing a shoehorn to fit in the gear, is a simple box with a streamlined front end. Whether you are building the powered or non-powered version the construction is basically the same.

Cut the fuselage sides, including canopy, from butt jointed sheet to the heavy lines on the plan and glue on ply doublers - making one right-hand assembly and one left-hand assembly. Now add the 3/16 sq and 1/8 sq longerons; 1/2. x 1/8 reinforcements; 1/16 sheet tail doublers and items F4 and F5 followed by F6 and F8.

Now join the two sides with F1-F2 (split) and F3, and allow to dry, making sure that everything is at 90° and true. When dry, add bottom sheeting back to F3 and then pull the tail end together - note plan shape - making sure everything is true in plan and rear views. Before going further, fit the nyrod outers for elevator and rudder, or use pull-pull for rudder..." 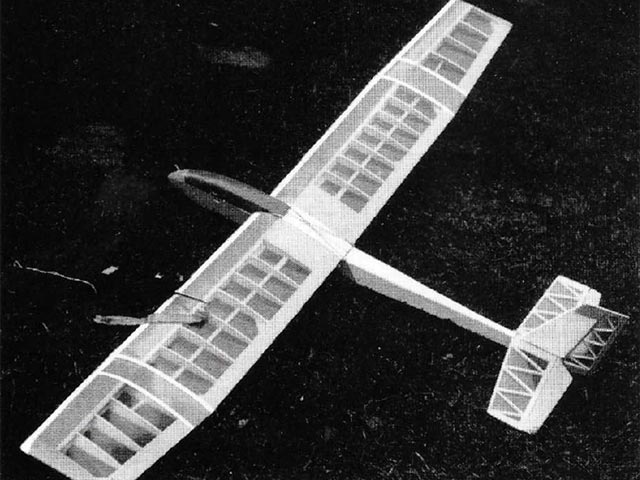