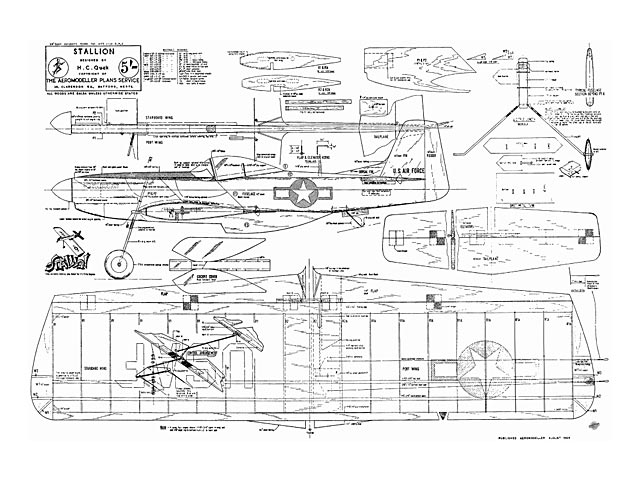 The Stallion and Wolverene (oz10969) both appeared in the same article in August 1964 Aeromodeller.

WHEN WE INTRODUCED two semi-scale 40 in wing-span stunters by the same designer in our issue for July last year, we anticipated that Red Dragon (oz10655) and Flying Tiger (oz10656), based upon the Japanese Zero and American Tomahawk fighters, would be a popular pair for mock combat. The many hundreds of aeromodellers who have subsequently enjoyed building from those plans (selling as CL.842 and 843 at 5/6d each, including post) will undoubtedly be keen to see this latest pair from HC Quek.

Based upon the P-51 Mustang and Focke Wulf Fw190, Stallion and Wolverene are each identical in proportion to their predecessors. There is one subtle distinction in that whereas the original pair were flown with 2.5 and 3.5 cc engines, the designer and his friends have tested the new fighters on 62 ft lines with .35 cu in engines without any structional failure.

So the work capacity of all four seems to be considerably broadened in aspect and one could really say that they will take anything from 2.5 to 6 cc, with appropriate line length adjustment.

Structually, Stallion and Wolverene also follow the same method of building and finishing as for Flying Tiger and Red Dragon, except that on Stallion, a commercial canopy can be used instead of painted wood and on Wolverene, metal flap and elevator horns have been tried to replace the previous wire horns.

For those not familiar with the previous models, construction begins with the wing, using a ply template to cut the ribs, not forgetting the holes for the left hand wing panel where the lead-out wires pass through the wing. Shape the leading and trailing edges, cement the ply strengthener to the LE and notch grooves to take the ribs. Then build the wing directly over the plan, using the mainspar to align the parts. Add gussets, bellcrank mount and control mechanism, then prepare the wing tips and flaps, etc.

The fuselage is shaped from pieces of 1/2 in sheet balsa, pre-cemented before final assembly with the hardwood engine bearers. The space between the two bearers depends upon the type of engine you choose to use. The plywood doublers are superimposed on either side of the nose to add strength and an optional balsa fairing can be applied as well.

The tail surfaces are solid sheet and are best prepared for doping before assembly, with the edges radiused. Bend the undercarriage to the true shape and pin firmly to the fuselage, then assemble the entire mold prior to covering the wing with strong tissue or silk or nylon. After preparing the surface with clear dope and sanding sealer, decorate to a semi-scale colour scheme..." 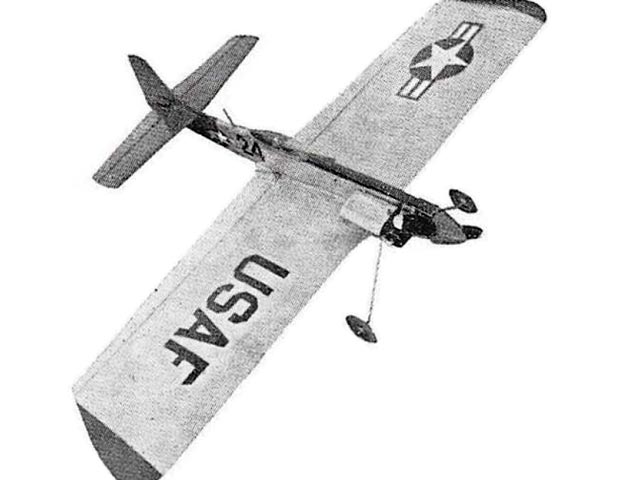