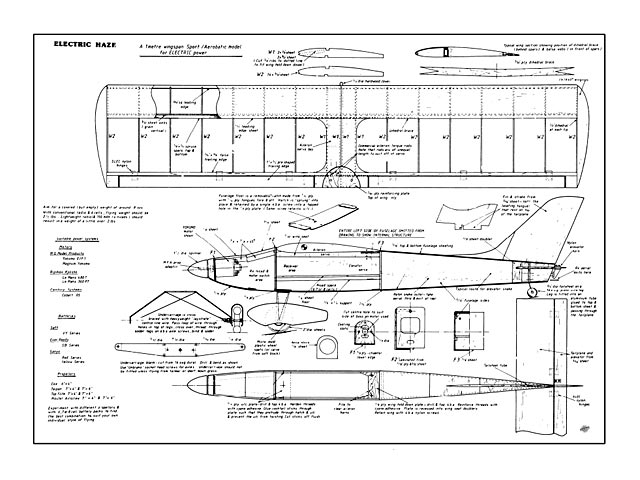 Quote: "Anything for a quiet life! Build this 38-1/4 in span electric powered bureaucracy-beater. Electric Haze, by Ian Peacock.

Electric Haze looks as good as it flys - and it flys pretty well. 10-15 minutes per quick-charge on a power climb to height, switch off and glide, then climb away again basis means fun whichever way you look at it! In photo at right, Electric Haze with its IC powered cousin Purple Haze.

THOSE OF YOU who may have followed my EMF column in our sister publication RCM&E will be quite aware of my feelings toward the local Borough Council. Being of somewhat bloody-minded bent (you're telling me! Ed.) and of long memory, it has been my ambition since the establishing of that insidious by-law, outlawing from all public parks

to find a chink in the system. As the appended definition of 'power driven' refers solely to 'the burning of combustible fuels', it left only CO2 or electric as available power sources.

CO2 as a power source for R/C proved to be a non starter for, although successful flights were achieved, the ultra low power that was available required very light models and very, very light radio. Furthermore, duration of power run was very short - usually less than 60 seconds, and could only be achieved in warm, wind free days.

My initial feeling about electric was not too bright either and my first attempt was to rubber band a Ripmax Cyclone (RS540) into the front of a Purple Haze with very mixed results.

The Purple Haze was a high wing cabin model for 0.15 motors and 3 function R/C. Despite its 'trainer-like' appearance it was no slouch, and was built at about the time that David Boddington was formulating the Club 20 racing rules. It met these rules exactly and was not only fast but aerobatic to the point where near-axial rolls could be achieved on rudder only (it had no ailerons).

Purple Haze was originally inspired by seeing a model flown by local clubster Gary Pope. Gary built his original from an American plan published in R/C Modeller entitled Quickie (oz5856). Regrettably, Gary's model was demolished somewhat rapidly when the wing folded in the centre. However, the couple of flights that I witnessed were enough to inspire a sort of 'anglicised' version with the inevitable Peacock swept fin. (Funny really - a lot of my models have this feature - even the ubiquitous Tyros and Tyro Majors (oz10859) that we still use for basic training!)

However, as it stood, and despite the hundreds built, the Purple Haze was really the wrong shape for electric flight and I began to sketch a series of modifications to overcome the problems. Reduced dihedral, strip ailerons and a change to a lighter wing structure all seemed valid, but it was another R/C Modeller design, the Wasp (oz4780) by Jim Zarembski, that really stung (?) me into action. So similar was Jim's Wasp to my new slim-line 'Haze', and so successful was its flight performance that I immediately got out the balsa knife and finished off what I had started several years earlier, I'm not sure whether my results are quite up to those achieved by Jim in the States but I'm more than satisfied that the result was worth the effort.

In the Electric Haze, the family resemblance still remains and so does the performance. It satisfies me as a weekend flyer, being reasonably quick and sufficiently acrobatic to stop me from going to sleep whilst flying!

Flight duration whilst hacking around close to the ground is around 5-7 minutes dependent upon motor and battery pack used but, flown carefully, 12-15 minute flights are quite practical. Although not part of its design criteria, the all-up weight is less than 1kilogram with agood buggy motor and seven cells, no less! So as an added bonus, the model is eliginle for the 1kg event and with the flight results I have had, I feel it would make a strong contender..." 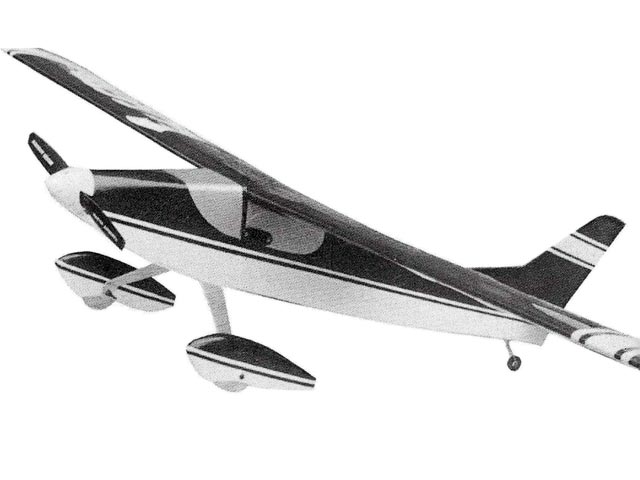 Electric Haze needs some reinforcement to prevent the wing peg pulling out in flight - I speak from bitter experience, back in about 1988-1989. Maybe a couple of doubler ribs on W1, possibly with some glass/epoxy reinforcement.
andyb - 10/03/2019
I had the same experience as andyb but in my case I cured it with good old fashioned dowels and rubber bands...
rcarter - 11/03/2019
I made this plane back in 1990. I powered it with the only buggy motor and battery at my disposal. Disappointingly, it turned out underpowered, so I substituted a small diesel engine - a Merlin, I think. This worked, er, rather too well. It shook the rc battery loose mid-turn. Having watched the battery fall to ground, the (Diesel) Haze flew off over the horizon. Two years later, I was recounting the story to a local and they exclaimed that they knew who found it! A few weeks later, I was reunited with the fuselage, and still have it displayed in my man-cave!
Crashrr - 12/03/2019
Add a comment