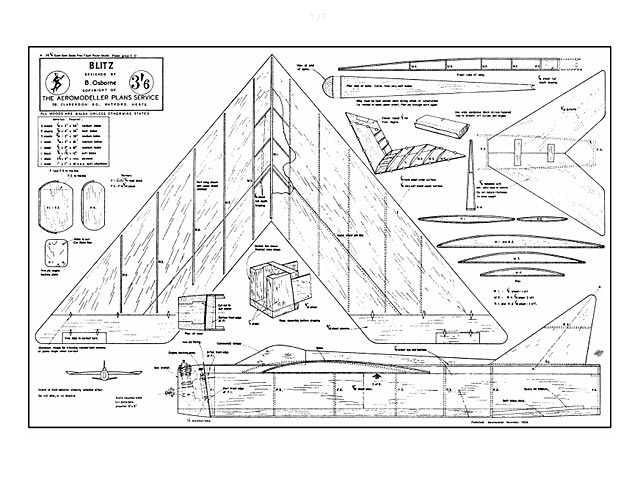 DEVELOPED FROM A PROFILE chuck glider to test the general configuration of the BAC Lightning for semi-scale free flight work, Blitz has been a great success and has attracted considerable attention at many contests, including the Nationals. Of very solid construction Blitz was designed to spend more time on the flying field, than the building board.

The chuck glider version showed a marked tendency to dive sharply and roll at the same time when hand launched, so in this powered free flight version the poor glide performance was overcome by increasing the scale wing area. The elevons on the wing may look rather odd but they are essential, as they make up for the lack of tailplane area. The wing sweepback angle was decreased to aid the poor spiral stability, together with the elevons providing a wash-out effect to prevent tip stall in flight, the fin was also reduced in area to this end. Anhedral effect on the wing is intentional so do not be tempted to add any dihedral. Inconsistent performance of this type of model due to small changes in trim or wind gusts was overcome by using a tough all sheet structure and rugged fuselage so that even after a hard landing the trim always stays the same.

Commence construction by cutting the underside of the wings from hard 1/16 in sheet and cementing the butt joint, then pin the sheeting to the building board and cement all the ribs in place as well as the 1/16 in centre section stiffeners..." 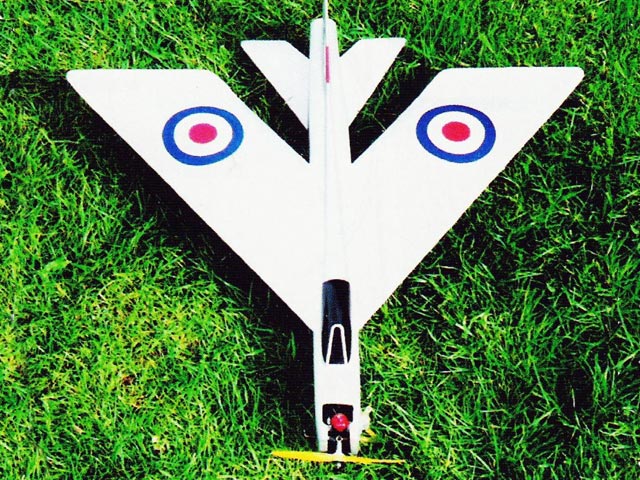