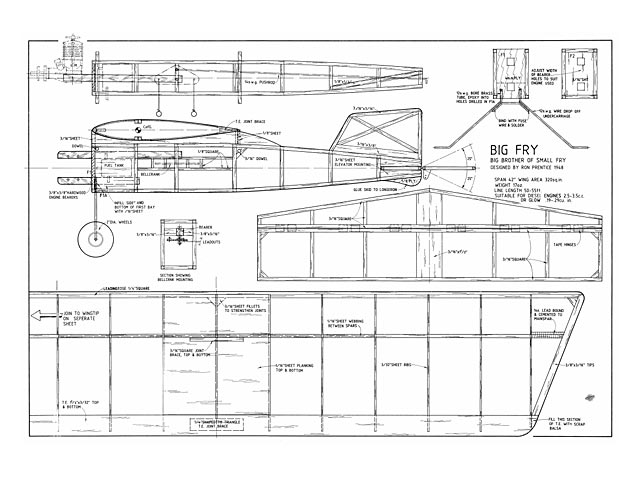 Originally designed in 1948, this here is a much later reprint of the design, as published in AMI December 1996.

I started to fly control line models in 1947 after I had saved up enough money to buy a Mills 1.3 and a Keil Kraft Phantom (oz1397) kit. Inevitably there were many crashes during the initial learning stage, but I soon became reasonably proficient and wanted to learn how to fly aerobatics.

I joinied the West Essex Club, which at. that time was the top control line club in the Country and with a lot of help from the 'experts', I quickly picked up the rudiments of stunt flying and practiced for hours at the old wartime airfield at Fairlop to Perfect my skills.

Watching Dennis Allen, Sid Sutherland, Bill (Funf) Taylor and other members flying the large, very light, Super Cyclone and Ohlsson 60 spark ignition powered models, it had soon became obvious that my Mills 1.3 models were underpowered and had too high a wing loading to perform well. I decided to draw up an aeroplane based upon the typical lightweight West. Essex 10 cc club model, but scaled down to 28 inch wingspan and using rubber model construction, and so Small Fry (oz9296) was born.

It proved successful right from the start and placed in many competitions. Later it was adapted to take the new and very powerful Elfin 1.8, which proved to be an ideal combination. Due to the success of Small Fry, I was approached by Mills Bros who gave me one of their larger 2.4 cc engines to use as an advertisement for them.

A new model, Big Fry, was swiftly drawn up and built for the engine, but although the model flew as well as its smaller brother, the engine did not live up to expectations. l eventually swapped the Mills 2.4 with an American pen friend for an Attwood Champion and built my first DeBolt Stuntwagon (oz1711), but that's another story.

Big Fry is simple to build and ideal for a first stunt control line model.

Recently two versions were built by Floyd Carter in the USA. One, powered by a Forster 29 spark ignition engine, was to be presented as a prize at the All American Vintage Stunt Championships at Tucson and the other, powered by a KB Glo Torp was Floyd's own entry in the competition. My own yellow covered model, is fitted with a PAW 19, which is also a perfect combination.

I usually start by building the fuselage. Make the two sides flat on the plan in the usual way, adding the 1/8 square framing around the lead out exits. When dry remove from the plan and separate sides. Assemble Formers F1, 1A and 2 on to the hardwood engine bearers, glue with 5 minute epoxy.

Fit fuel tank into position between bearers and glue in place, packing with scrap balsa where necessary. When this assembly is dry, add the two side frames then the crosspieces. Drill holes and glue the 3/16 dowels in position. Sheet in the first bay as shown on the plan.

Carefully drill holes in the bottom of the ply formers and glue in the 12 swg brass tubes for the drop off undercarriage. It is important to make sure that (hese tubes are fitted parallel with each other. Mark the position of the bellcrank pivot point on the upper engine bearer and drill hole for the 6 BA pivot bolt. Make up the bellcirank assembly with leadouts and elevator push rod..." 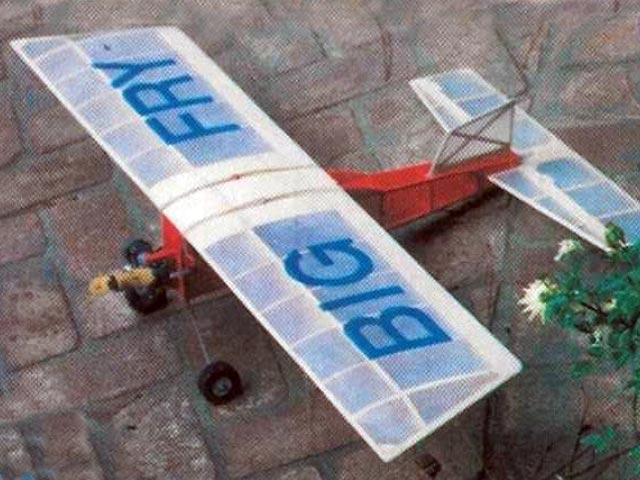