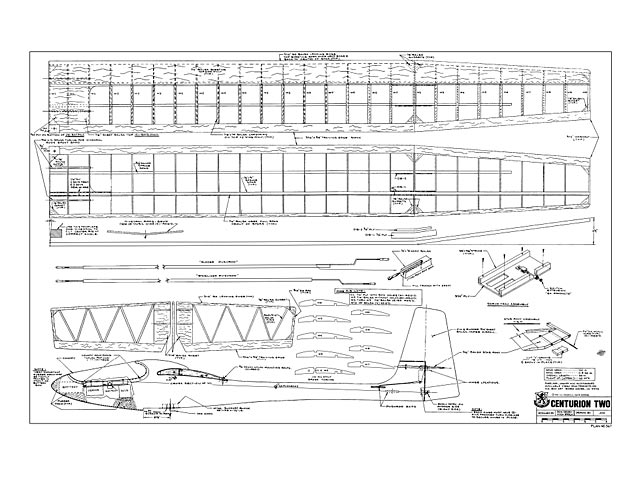 Centurion II (Centurion Two). Radio control sailplane model. This kit used a prefabricated plastic fuselage, so no formers are shown for the fuse.

Note this is a low res scan of the design as it appeared in RCM. The design was also kitted by Soarcraft, see Centurion II (oz7939) for a much clearer and higher resolution scan.

Quote: "What may be the ultimate 100 inch span sailplane to date, the Centurion can be handled by the novice, yet has an impressive number of competition wins to its credit. Centurion II, by

THE CHALLENGE: To design a beginners R/C Sailplane, which will withstand considerable punishment and yet provide outstandingly stable performance which is mandatory to maintain a novice's interest and heighten his enjoyment of the sport of R/C Sailplane flying. In addition, this same design must be capable of top calibre contest performance.

THE SOLUTION: Don Dewey, Editor of R/C Modeler Magazine, and Hugh Stock of Soarcraft Products, collabroated on this challenge and, using their combined years of experience in design and materials, conceived the Centurion II. At last the new flyer can achieve thermal flight proficiency even if he does not have the benefit of assistance from an experienced flyer. And this 100 in sailplane has demonstrated its ability to equal or exceed the best competition ships in its class.

The Centurion II is, in actuality, a third generation design. Historically it began as the Gus (oz6017) which was designed several years ago, by Willie Richards and was one of the most popular R/C Sailplanes of its day. In December of 1972. RC Modeler Magazine published a construction article on the Centurion I (oz11401), which was Don Dewey's optimized design of the original Gus. This design had some unique features such as the streamlined fuselage center section over the wing, which provided for the least possible drag at the wing-fuselage junction.

Another oustanding Centurion I design was the break-away wing attachment design. This feature incorporates the use of nylon hold-down bolts which will allow the wing to shear away, should the wing unfortunately hit an immovable object in flight. This feature greatly reduces, or eliminates, wing structural damage.

The Centurion II retains the excellent design features of the Centurion I, but has incorporated a new airfoil, 100 inch wing length, and an all-flying rudder. To achieve the ruggedness necessary for a beginners sailplane, the authors solicited the assistance of the plastics industry to develop a plastic material and forming process which would provide a fuselage with optimum strength and durability. The plastic selected is easily bondable with an ordinary plastic model cement.

The final material selected for construction of the fuselage has a beautiful white finish. This finish will accept paint (except for laquer) should the flyer desire something different. The Centurion II fuselage is entirely pre-fabricated and requires no adhesives. It is far stronger than fiberglass and can sustain shocks that would shatter most conventional materials. In addition, it is stable over the widest range of temperature variations..."

Update 03/03/2020: Replaced this plan with a clearer version (central banding removed), thanks to TonyP. 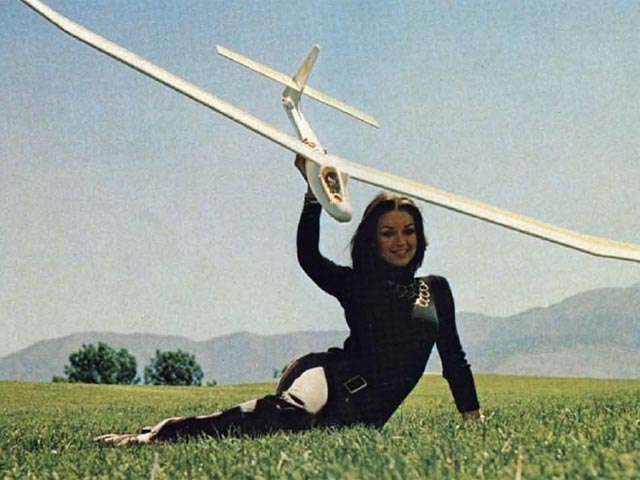