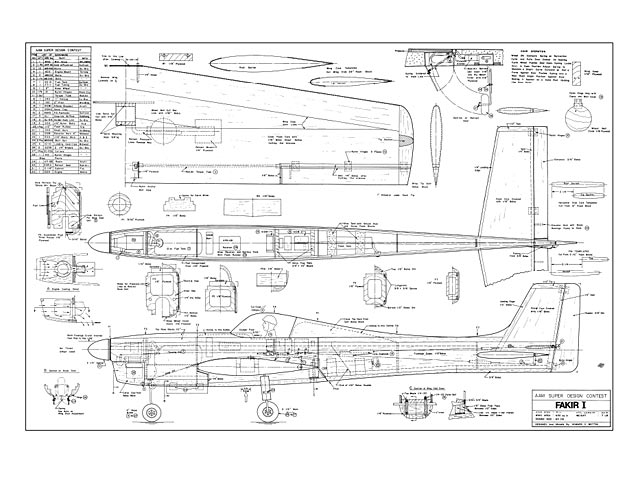 The February 1973 issue of AAM contained the announcement of a Super Design Contest, based on the drawings of Bob Lopshire. The bottom view of the Fakir was on the cover of the Doylestown World Championship program (also on the October '71 AAM) and the top view appeared on the cover of the February '73 AAM. Using the rules for the contest as a guide, I created the idea of the Fakir-l. The contest called for the plane to be designed on paper first and then constructed according to those drawings. Finally, the rules required that the flight characteristics be demonstrated by appearing at the '73 NATS in Oshkosh.

The primary objective of my particular design approach was to create a plane that would have good flight characteristics. Many pattern aircraft are developed through a build-and-crash procedure, often encompassing several years. In this way, the bugs and design deficiencies are eliminated one by one, until an optimum craft is achieved. Because of the time restrictions imposed by the contest, this was impossible; so the next best thing was to model the plane according to existing designs of known flight quality.

The first step in the design procedure was a dimensional analysis in order to arrive at the overall configuration. Current design trends in pattern planes decree that their weight is between seven and eight lb., with wing areas of around 650 sq in. The overall configuration of the plane was dictated by Bob Lopshire's drawing in AAM. This, then, was the basis for the design, with each component defined by experience and the state of the art analysis.

DESIGN THEORY. Wing: The wing is the most important single feature of a pattern design. A goal of seven lb total weight and a 650 sq in wing area gives a wing loading of 25 oz/sq ft. This is on the heavy side, but about standard for the top pattern design of today. The wing planform with a straight trailing edge and swept-back leading edge, is dictated by the AAM drawing. Aspect ratios have traditionally been between 5:1 and 6:1, with the higher ratio being more stable about the roll axis, and having better turn and spin recovery characteristics. A wing design l have evolved through the years has a 5.7:1 aspect ratio.

This design must incorporate inset ailerons. Using a figure of 11 percent of wing area, I arrived at an aileron area of 70 sq in. The current trend of using torque tubes eliminates the bellcranks and pushrods in the wing, and also satis-fies the contest requirement of no exposed linkages. The original design called for a 1/8 dia torque rod, but this had too much flex, and was re-placed with a Rom-Air torque rod unit.

The next important selection is that of airfoil.Through the years, hundreds of different airfoils have been tried, and many have been claimed as the optimum for RC. Currently, the symmetrical sections are the most popular, with 15 percent thickness just about the standard. Because this was to be a highly tapered wing, some method had to be employed to prevent tip stall. Dismissing wash-out, there are three common methods to prevent tip stall:

(a) increase the thickness percentage at the tips;
(b) maintain a constant large lead-ing edge radius;
(c) gradually change the tip to a slight lifting section.

Point (b) was used in the design of this wing.

Incidence and dihedral complete the wing analysis. The 0-0 setup is the standard of today. I like to design my wing to be 1/32 lower at the trailing edge, just to insure that the wing does not end up negative. For all practical purposes, this is still a zero incidence design. The current trend is also toward zero dihedral. I prefer one in under each tip, just for appearance's sake. With the swept-back leading edge (the sweeping giving effective dihedral), this probably figures out to be about 20. In summary, the wing was designed to the following dimensions..." 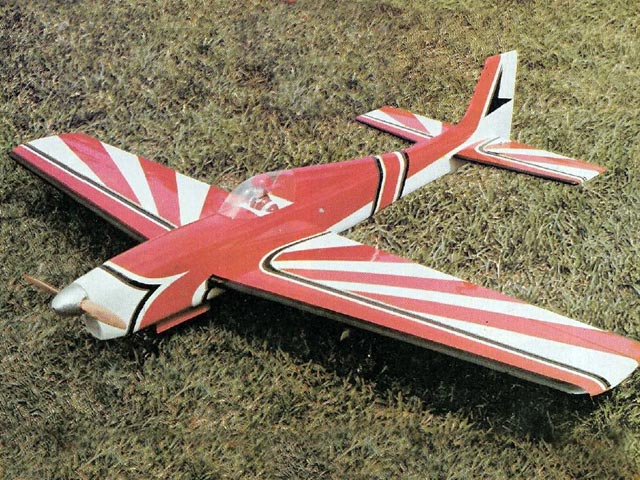