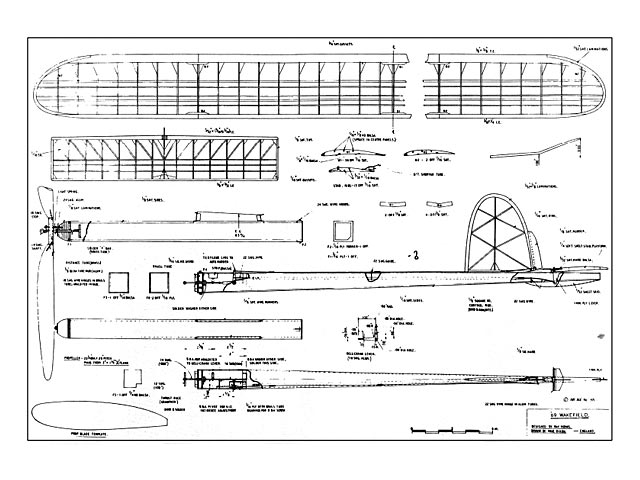 Quote: "No it's not a place to eat but there are many free flighters who will eat up the design theory and concept for this outstanding Wakefield rubber job! Automat, by Ray Monks.

I first started thinking about an auto-system Wakefield in 1966. At this time auto stab systems were becoming popular on power models, in England that is, and I had been flying a FAI power model with a timer operated system with some success.

I had come to realize that flying Wakefield was rapidly becoming very similar to flying power models. Motors runs were down to 35-45 seconds so really the length of run did not make much difference. What did matter was the height gained and the glide performance. So I decided to use more powerful motors, and use an auto stabilizer system to control the power burst. It would also let me trim the model to glide like an A2; that is with the CG in the 50% to 65% range, and with the corresponding large angle of attack. I could also throw the model much harder without any fear of looping, etc.

My own FAI power model had a simple auto stab system, and had proved to be easier to trim and fly than previous models. It also did better times. I used the engine timer to alter the trim, Just a straight switch from power to glide. On a power model this is quite satisfactory, but due to the varying output of a rubber motor, not good for the Wakefield. What was wanted was some system using motor torque to operate the system.

Having made the '67 FAI Power team, the idea was shelved only to find that at Sazenai both Jim Patterson and George Xenakis had auto systems. The Xenakis system was torque controlled and seemed to be ideally suited to the type of model I had in mind, and the system in the 'Automat' owes something to the Xenakis system.

The model was built during the winter of 1967 to compete in the trials meetings of summer 1968. I intended to try to make the FAI power team if possible, but wanted to fly Wakefield as a second string. It proved easy to trim and the auto system gave no real trouble, though I did find that an auto rudder was needed to alter the power turn. At the trials it placed third, though to tell the truth, I did not really give the model as much attention as it deserved, since my main efforts were in qualifying with FAI power.

Having flown the model for almost a complete season, I don't think that I would make any major changes to my model for the next series of selection trials. Possibly I would use another five sq in in the stab. It might give just a little better stall recovery. I still feel that the auto system give a very worth-while improvement in handling and per-formance.

I hope I've influenced the reader to give some thought to trying such a system. They are not easy to make, but none of the FAI classes are easy. If you are convinced by the opening para-graphs, and want to build this model, I suggest that you start construction with the most difficult part. This is the tail boom and auto stab system. I have described this in detail, and if you study the drawing before starting construction, you should not find it too difficult..." 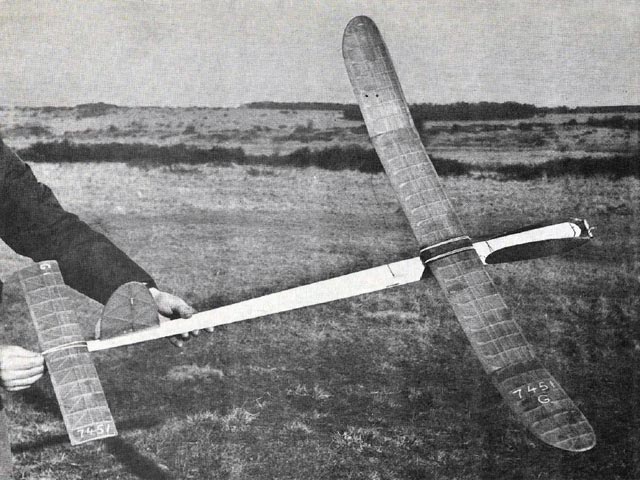 Very interesting dethermalizer timer. Wish the drawing was clearer for this mechanism!
rchopper56 - 26/02/2019
That's a VERY old d/t system. if you look at the two 'hooks' at the back, there's a short rubber band. Back then we used 'de-thermaliser fuse' (basically it was a wick from a paraffin lamp with graduated markings). That was inserted inside the 'hold down' rubber band and lit (normally with a cigarette). It smouldered at a steady rate and, when the glowing bit reached the retaining rubber, it melted it, the forward rubber then pulled the tailplane up almost verytically and the plane then descended.
Daithi - 27/02/2019
Dethermalizer fuse is still widely used in free flight today and is available commercially from Sig Manufacturing and other sources. Yes, it is an "old system" developed by Carl Goldberg around 1940. But it is light, reliable and inexpensive. All of my older models still use a fuse; I use clockwork Texas Timers on the newer ones.
Simon Blake - 27/02/2019
Add a comment