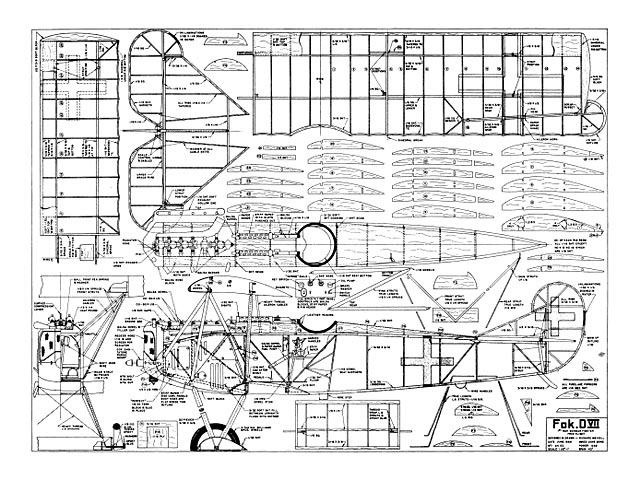 Quote: "World War l's famous fighter that almost turned the results of the show completely around in excellent free flight scale! Some amazing facts regarding designers Fokker/Platz that are not generally known is an added bonus to this outstanding article. Fokker D-7, by Richard Meixell.

Perhaps even more amazing than the fighting record of the Fokker D-7 is the plane's design story. The D-7's ability to hang on its prop and pour bullets into the bottom of enemy planes is well known. The Allies so feared this fighter that they specifically demanded surrender of all D-7's in the terms of the armistice.

Less well known, though, is the story of Tony Fokker and Reinhold Platz. Neither of them had any training in aeronautical engineering, but together they formed a team that beat the best engineering brains the First War could produce. Both were geniuses and both used instinct instead of theoretical knowledge to produce airplanes that became the standard of the industry up into the 1930's. Fokker enrolled in an aviation trade school in 1910, helped build an airplane and dropped out of the school, all in the same year. He considered himself a finished product and had no use for book knowledge. He proved to be only an average craftsman, but an excellent pilot and an even better salesman. After leaving school, he formed one of the most efficient flying schools in Germany which trained many of the First War pilots.

Fokker's first trainer borrowed heavi-ly from the design of another airplane and after it became obsolete he did not have any more success until he copied the Morane-Saulnier and turned it into the Fokker E III fighter. Fokker had no qualms about using anything that would help him and he always claimed full credit for himself. Even the machine gun synchronizer was not his work, but that of his armament specialists. Fokker had neither the training nor interest to carry out an engineering design. However, he had the uncanny instinct to know what was wanted and to turn out a better job than was expected in record time. His Morane copy was far better than the original and his gun synchronizer, that so revolutionized aerial warfare, was his answer to the armored propeller that merely deflected bullets. Fokker put all his money into per-sonal profit and none into research or manufacturing facilities. His factory was a collection of wood huts...

The Fokker D-7 is a pleasant model to build and fly. Its structure lends itself nicely to modeling and the plane is strong. There is ample opportunity to add the details that count in scale contests.

The model shown is the second from the same plans, the first being a test model which lacked any refinements but had the same force arrangement. It flew for two summers with very few repairs required.

The present model was entered in the 1966 Nationals at Chicago where it earned top points in scale judging. The new model had about the same flying characteristics as the original, but was steadier. It would climb to about 50 ft, level off, and cruise in a large circle. Excessive power and high winds were not to its liking, though. The model made a perfect ROG test flight about 6:30 am at the Nationals. The Baron himself couldn't have done better. But by the time official flights started, the 'Windy City' weather came to life, and it was all over. Probably the only safe time there to fly free flight scale is in early morning or late afternoon.

If however you don't have to fly in hurricanes, I do not hesitate to recommend this airplane as being a possible contest threat or a good sport flyer, depending on the amount of detailing you do.

The structure of the D-7 is not difficult. Most of the plane has straight lines with a minimum of fairing. The scalloped trailing edges are different, but not hard, and well worth the effort. The method shown of building the wing struts takes most of the problem out of aligning the upper wing.

Start with the fuselage sides..."

Update 26/02/2019: Replaced this plan with a clearer copy (patterned background removed), thanks to rchopper56.

Quote: "Hi Mary and Steve, Here is a possible replacement and is a much smaller file size for Dave's scan. The background was removed using SV ScanRaster. First the file is inverted. Then using the function closure, this will fill in most of the remaining 'holes'. 'Holes', not specks when inverted. Invert and inspect. Use the erosion function, then back to invert and again use closure. Then invert back to normal. This will remove almost all of the remaining holes. The remaining can easily be removed by hand. Then convert back to grayscale and used the Photoshop dust and scratches function to somewhat smooth the lines. Then back to ScanRaster to convert back to monochrome. The main reason to use ScanRaster over Photoshop to convert to monochrome is that ScanRaster doen a much better job and you end up with G4 compression. Piece of 'cake' if you have the right software. I realize that a lot of modelers will not like this version... Gene" 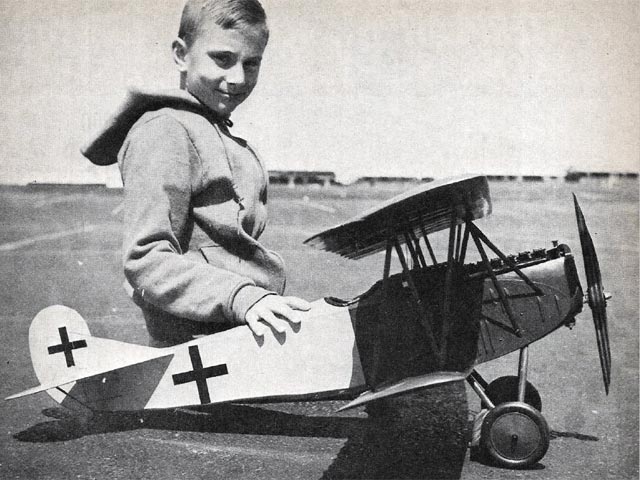