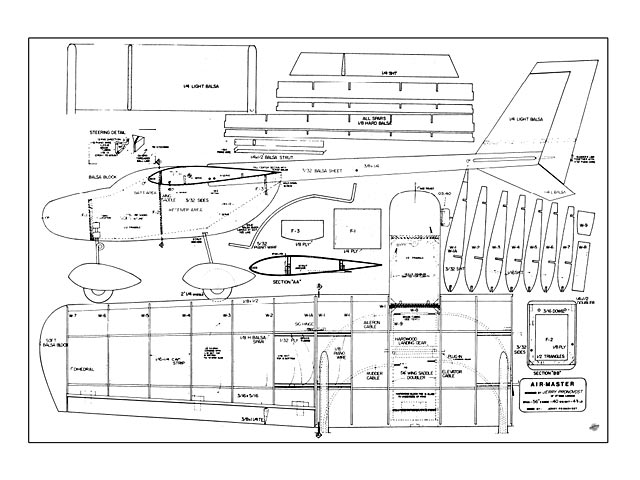 Quote: "No, it's not the Skymaster, but it closely resembles the Cessna 'Push-Puller' enough to give it its name, which is almost synonymous! Air Master, by Gerry Pronovost.

Does the name sound familiar - like Skymaster? Well, a little history might be appropriate. The inspiration for this model came from a particular picture in the 1974 World Aircraft Directory which included in its pages pictures and data of various corporate aircraft, used to fly executives and material to and from specific destinations at their companies' convenience. One of the shots was a Cessna XMC (Experimental Magic Carpet). This plane was designed with the 100-hp Contintental 0-200 as a pusher configuration, and showed a marked resemblance to the Skymaster, except that it lacked an additional front engine.

The overall appearance and twin booms of this aircraft lured me into designing a model of it, with the modifications of a trac-tor engine up front for ease of handling, and a more practical CMG location. I chose a semi-symmetrical airfoil at the wing roots and a fully symmetrical one at the tips. Performance later proved this to have been the right choice. (The airplane is as equally at ease flying inverted, as it is right side up, inside and outside loops are a cinch, and four-point rolls are well within its capabilities.)

For ease of transportation, the two outer panels are detachable by disconnecting the aileron devises and removing the straight pin which locks the two sections together. Another innovation is the steering, mechanism: My steering device is very simple and operates from the rudder servo in the wing, eliminating the need for a second servo. (The rudder servo, being fastened to the wing, would have necessitated this in the fuselage to activate the steering nose wheel. (That's OK if you're an electronic genius!)

This only requires a short length of brass tubing and 1/16 piano wire. First bend a 90 degree flat at one end of the tubing and cut it to make a fork (see drawing detail). As you lower the midsection onto the fuselage, you engage a 1/32 piano wire which is soldered to a wheel collar, and serves as a retainer for the rudder cable.

I am quite proud of this airplane. It placed fourth in the original design class at the 1976 Toledo Show. It is a stable flier yet maneuverable, and attracts attention whenever flown.

So let's get some balsa and start cutting! Once you have all the parts cut out, read the instructions carefully and be sure you follow the proper sequence in building the wing. Before you sheet the top of the wing, make certain that everything is in, ie control cables for ailerons, rudder and elevator (stiffen cables with solder to prevent kinking). Thoroughly epoxy the 1/8 piano wire wing-guide. pins and their counterpart, the brass tubing; oil inside of tubing to prevent sticking. Note that the wire guide pin at the rear spar protrudes to half the length of the pin at the front spar.

Regarding the installation of the aileron servo, the cables are linked together with brass tubing, then brought out through a slot in the wing with a wire as shown on the plan. The servo is fastened to the bottom outside of the wing..." 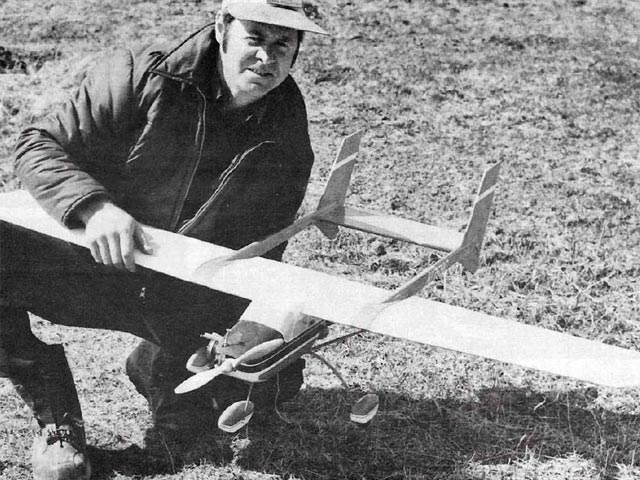