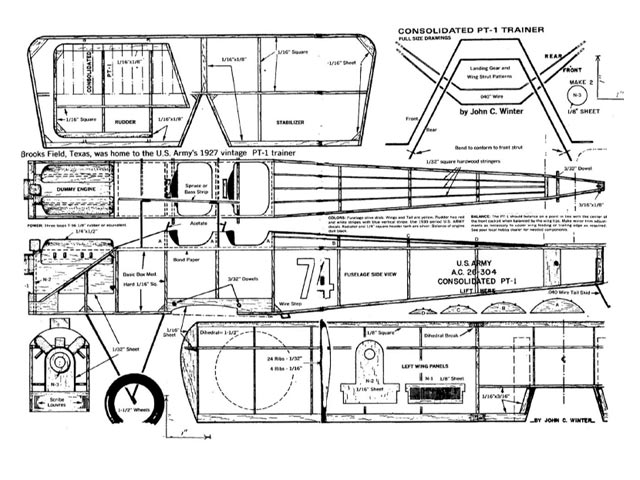 The prototype of this model was used to train Air Corps cadets at Brooks Field, Texas long, before many of us made our first 'hop' with the stork. What a breath-taking ride that must have been (few of us remember) for it probably faired well with the PT-1's maximum speed of 92 mph. Anyhow, taken with this model as we were, we decided to build one for fun.

The super simple lines of this ship lend themselves to making the 'wind up' job shown on these pages. Simple slab-sided fuselage, constant chord wings, simple tips, and the general lack of frills are outstanding. Sold? Well, we suggest that you look over the plans before starting out so that you fully understand the building sequence.

FUSELAGE: This part is so simple to build that we won't stand for any griping over the slight effort it takes to build the dummy engine. Besides, isn't it a better looking nose than a hunk of clay or solder? Start by making the two fuselage sides. Build them directly over the plan (using wax paper under the construction, of course). Cement the 1/16 sheet balsa portions in place and the gussets.

All cuts should be made accurately so that the parts join with the maximum areas of wood touching. Pre-cement all end-grain joints for strong junctions - a trick that adds a considerable amount of strength for very little effort.

Join the completed sides starting at the back of the cockpit and working toward the nose. This is the parallel portion as seen in the top view of the fuselage. All cross-pieces are equal length. Install the 'radiator,' N-1, at this time. Do not fit the top formers as yet - these are A, B and so forth.

Next, join the fuselage sides at the rear using a piece of 3/16 x 1/8 for a tail post. This part can be built up from three pieces of 1/16 strip if necessary. Once this has been done, and the alignment has been checked, you can add the remainder of the cross-pieces. Refer to the top view for their length.

Don't just sit there chewing on a piece of balsa! This is the time to be doing something useful. Get out your wire and pliers and make up the land-ing gear, wing struts and tail skid. As you complete these parts, install them on the fuselage. The wing struts will prove easier to handle if you assemble them before you cement them in place. Use split bamboo as noted. This is easy to make and short pieces of bamboo are easy to come by so don't cut corners by using balsa which won't have the necessary strength.

The formers should be cut out and cemented in place at this time. Note that the forward portion of the fuse-lage is covered with bond paper and that bamboo stringers are used aft of the rear cockpit.

The bond paper will have to be put on in two pieces to get the downward slope shown on the side view. Use care in fitting the paper and avoid trouble.

Finish up the nose and the rest will be easy. Cut out and cement the 'crank-case front' (N-2) to the back of N-1 and mount this assembly between the 1/16 balsa projections on the front of the main frame..." 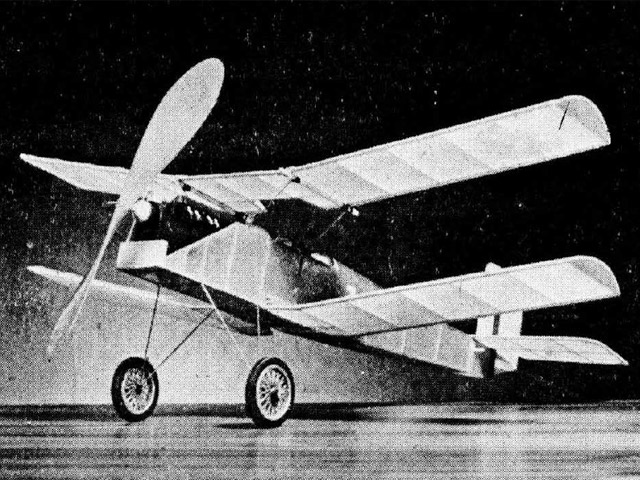