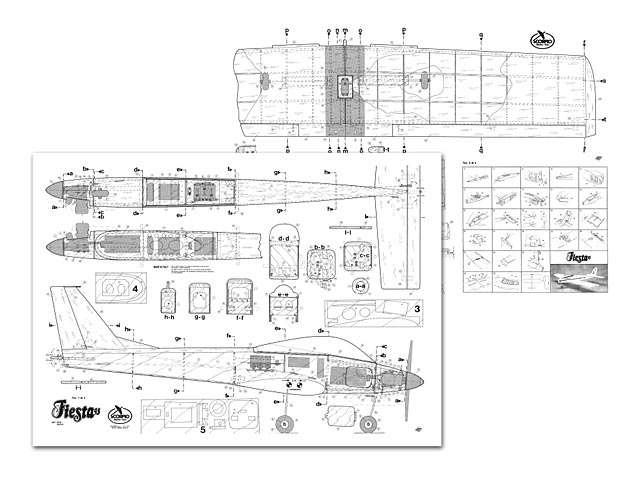 Discontinued kit. Manufactured in the Czech Republic, distributed in Italy, the Fiesta 45 was sold as an ARC model (almost ready to cover). Plan sheet #2 shows assembly instructions as a sequence of 23 small line-art drawings. It looks like the fuselage and wings essentially arrived ready-made.

IT IS ALWAYS PLEASANT to receive a kit to review but even more so when the type of model received falls straight into the category I would have chosen myself, an in-termediate sized, aerobatic model by Scorpio of Italy, the 'Fiesta 45'. Even before the box is opened quality is evident by the well presented and sturdy packaging. Inside the carton the same excellent standards are maintained. The two most noticeable items being an already nearly complete balsa/ply fuselage and what appears at first glance to be a pair of balsa covered foam wings. It was only upon close examination of the latter, coupled with a quick read of the instruction book, that I realised there was no foam in the wing panels. They are in fact of built-up balsa construction and are very true and ever so light.

The remainder of the kit comprises all the usual accessories with the exception of the fuel tank, spinner, wheels and rather oddly to my mind, no inners to go with the control cable snake outers which are supplied.

Before the off: It's been said before, but it can save a lot of grief, read the (excellent, four-language) instruction book. Each step in the assembly is covered and a space left beside the instruction to tick off completed items. Nothing is missed. Item 1 insists that all parts are checked against the list in the book which details even the nuts which hold the elevator horn in place. The last item reads: Take off into the wind.

Another neat guide is to preceed each item that requires glueing with a code letter indicating the type to be used, `E' for 5-minute epoxy or 'S' for aliphatic glue.

The Fuselage: Even though the fuselage basic shape is already constructed there is more work than is immediately obviously needed to complete it. Ply doublers have to be fitted inside the radio bay and corner reinforcement in the tank compartment.

For those of us blessed with shovel shaped hands this can be a bit fiddly. The die-cut parts however are an excellent fit and tend to centre themselves in their correct positions.

The engine compartment comprises preshaped hardwood bearers which are epoxy glued into grooves which run through the front and second bulkhead. A Webra 'Speed 40' fits the space between the bearers exactly. Other engines may require slight adjustment of the bearers.

Control surfaces are hinged temporarily to the fin and railpiane which are glued into pre-cut slots in the fuselage. These slots have been cut very accurately and little if any adjustment should be required to ensure an accurate assembly.

Internal control runs are, as previously mentioned, of the 'snake' variety. I fitted the throttle and steerable noseleg runs as per instructions having first visited the local cycle shop to purchase the correct size of brake cable.

The Wing: Assembly is very quick and even though the wing halves are of built-up construction the jointing method is as for a set of foam/ veneer wings. A fibreglass bandage is wrapped around the glued together centre section of the wing halves and according to the instructions, aliphatic glue is rubbed liberally into the weave and then sanded smooth when dry. This may be a sound method of jointing, but I know I will feel more confident in my joint of fibreglass bandage and two coats of epoxy resin.

Wing tips are block balsa carved to shape and the strip ailerons are operated by torque rods. The only unusual feature of the wing is the addition of an anti-stalling device to both leading edges just outboard of the fuselage sides.

The wings are held in place with the now almost universal method of a peg in the centre leading edge locating in the rear of the fuel tank bulkhead and two nylon bolts at the trailing edge secured through hard-wood blocks epoxied to the fuselage sides. This kit provides the alternative method of cross dowels and rubber bands if desired. I chose to use the former method which is neater and should be stronger. In the event the one peculiarity of Scorpios system - they provide a steel bolt to tap a thread in the wood blocks rather than use captive nuts - very nearly let me down.

Radio Installation: There is absolutely acres of space in the fuselage, enough to fit servos as big as house bricks. Servos are mounted sideways in a ply tray which slots into grooves in the fuselage sides. A number of pieces of ply are provided to construct battery and receiver compartments.

Covering and Finishing: Enough tissue is provided in the kit to cover the wing surfaces only. I elected to use the tissue/dope method to the whole of the model though I think almost any method and type of covering could be used. After one coat of thinned dope I tried, for the first time ever, a coat of S.P. epoxy. I applied my usual trade mark of red, white and blue stripes using car cellulose followed by two coats of 'Aerokote.' Needless to say the model put on quite a bit of weight during this period but finally at 51b. 12ozs., nicely inside the weight specified by Scorpio as a top limit (6lbs. 4ozs.).

Disappointments and Disasters: Such is the English climate that late February and early March provided, in my part of Yorkshire at least, calm clear sunny days Monday to Friday and thick fog or torrential rain on Saturdays and Sundays. Finally a fine Saturday dawned and I arranged to meet fellow club member John Torr at a disused East Yorkshire aerodrome for a flying and photo session.

Just before setting off I fitted the wings to the fuselage and after tightening the bolts decided to exert a little pressure on the fixings using just my thumbs and finger ends. The bolts pulled straight out of their mountings. A weakness easily remedied by fitting captive nuts but most annoying when it cost a days flying and a 90 mile round trip for John. It's a good job he took a model of his own. Sunday dawned foggy, deteriorated to drizzle and half an hour before sunset cleared up. Monday was glorious.

Flying: Mothering Sunday dawned bright, cold and calm, almost perfect conditions for a test flight. Arriving early so as to be ready for our 11.00 am start on the club field the 'Fiesta 45' took to the air at 11.02 am.

Take-off was smooth and straight with no directional control required. When the model finally left the floor the climb out was again straight, with wings level and at a realistic angle. A little up trim was required to hold level flight. A couple of fast runs and turns in both directions proved two points.

1. The model isn't going to win any pylon races. This is probably due to the very thick wing section.
2. Control response, at the settings listed in the instructions is instantaneous but not twitchy.

Loops are very easily performed, the model giving the impression of 'flying' round the whole manoeuvre unlike some models which are dragged round behind an overpowerful motor or others which wallow over the top.

Rolls are of a constant speed though not over fast and slightly barrely, though I think this can soon be rectified with a little practice.

The stall - what stall? The only way the 'Fiesta 45' could be made to stall at all was to cut the motor whilst the model is climbing and try to keep the nose up as it slows down. The stall from level flight just doesn't happen. As up elevator is fed in the model slows down and settles into a flat steep descent. Push in some down and open the throttle otherwise the descent will end with a flat but heavy landing.

There is no appreciable lack of control response at slow speeds the model answering all commands precisely and predictably.

Conclusion: A more difficult model to slot into a category after it has been flown than before. It certainly is an aerobatic model but not one of the all power 500 foot loop variety. The 'Fiesta 45' is more akin to a control-line aerobatic model in performance, indeed a better pilot than I should be able to give a fair imitation of one by flying close in and per-forming tight manoeuvres.

Quality of the kit and methods of construction was excellent with the exception of the method of attaching the wing which I would strongly recommend anybody building this kit to change. Construction is uncomplicated but took me longer than expected considering the amount of work already done.

In short an excellent kit which turns into an attractive model who's aerobatic performance is good without being sparkling. A more rearward C of G than that of the review model may introduce a bit more 'fizz'." 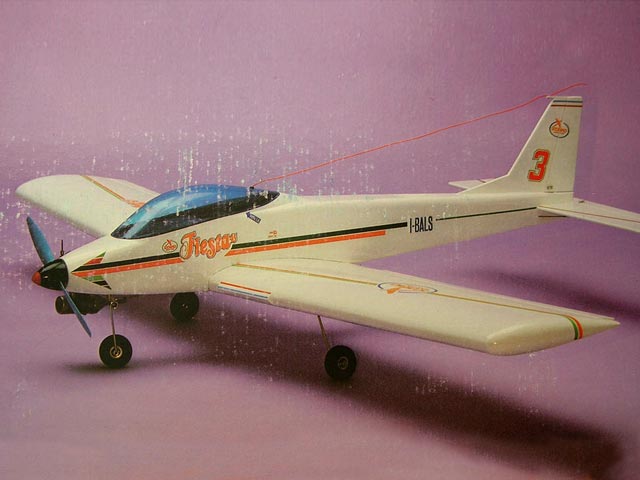