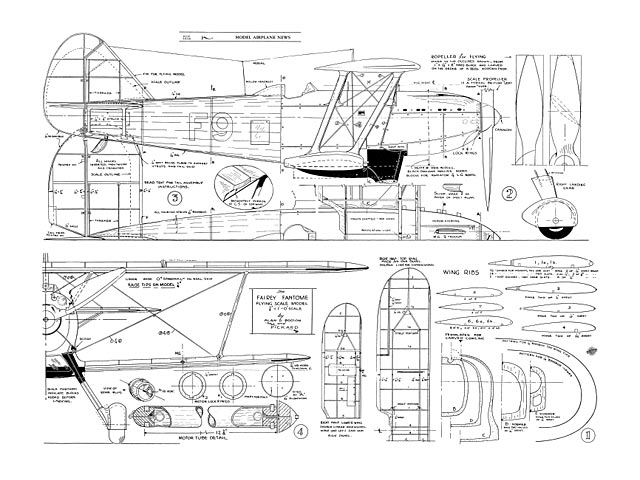 Quote: "Build This Flying Fairey Fantome. How You Can Construct a Scale Model of a British War Plane That Has Fine Flying Qualities As Well As Looks. By Alan D Booton and Ralph Pickard.

ONE of the newest and fastest multi-gun fighters, the Fantome was apparently designed for export, otherwise the secrets of its construction would not have been disclosed by the British. The Fantome boasts of four guns; two of which are mounted under the cowl in the usual place, and one in each lower wing. A 20 mm rapid fire cannon is mounted between the banks of the V type motor and fires through the hub of the geared propeller. With a speed of 248 mph at 20,000 feet it is believed to be the speediest of the multi-gun types. It is equipped for high altitudes and also has racks for light bombs.

The model presented has been faithfully reproduced in miniature and is capable of making flights of several hundred feet. Keep in mind, however, while building the model that even with the carved cowling, the tail must be devoid of any surplus weight and the nose may need a .1 or .2 oz weight to get the final balance.

Wings: Just before starting the wings, cement the 2 main cowl blocks together in several spots and lay them aside to set. The wing ribs and tips are drawn full size on sheet 1 and the mid-portions of the wing frames are shown on the top view, sheets 2 and 3, but it is necessary to draw simple single line panels full size on which to assemble the parts. Make the top wing all together, including the ailerons and hinges, which are simply 1/8 x 3/8 thin aluminum strips inserted through the spars where preferred, twisted and cemented. When dry, the ailerons are workable when cut free at the trailing edge.

Make two separate lower panels. Leave the MG covers and external parts until the model is ready to dope. Note the imitation of the retrospect mirror. Cover it with bright tinfoil after the model finished and it will add to the appearance.

Cowl: Trace the top and side outlines of the cowl drawing on to the cemented blocks, using the joint as center for the top outline. Cut on a band-saw if possible, and then cement the bottom block on. Cut slots for the landing gear stubs and cement them in, referring to the angles on sheet 4, front view. It is suggested that 2 extra No. 5 ribs be cut and placed on the lower wing stub location to carve from and protect the stubs. Carve the cowl and use the templates on sheet 1 for reference. After carving, sand to a smooth finish. Cut through the center of the bottom block, then part the cowl blocks and hollow them out. Leave the wood about 1/4 in thick at the nose, and taper to 1/16 to section C from which the 1/16 thickness continues to the rear of the block. (A sharp, spoon-shaped tool is ideal to hollow out with. Try it).

Fuselage: Use the side view drawing and assemble a right half fuselage. Prop the cowl up on pieces of 1/32 sheet, fasten 1/16 strips to the top and bottom outlines, and cement the right halves of the formers D and E in place. (Raising the cowl, as above, centers the cowl with the center of the 1/16 strips). Cement the fairing strips on, leaving the rear ends unattached to anything until both sides are complete. When dry, take the right side up and build the left to it.

Mix one level teaspoonful of flour to an ounce of banana liquid or model dope and rub it on the surface of the cowl with the index finger, a small space at a time. Dip finger in thinner if the mixture gets sticky before the smoothing is done. (This fills the grain and permits the use of only one coat of gloss dope). Refinish any unfilled spots and when dry, sand to a smooth finish. Scribe the panel lines with a pencil and length of straight cardboard, and punch the imitation screws in with a pencil point.

Tail Surfaces: Draw a simple outline of the whole stabilizer, sheet 3, and assemble as a unit, since it is stronger and easier to attach in this manner. The ribs are cemented in, in rectangular form on the rudder and stabilizer and are sanded to streamline shape after removing from board. Insert the stabilizer in between the fairing strips, in approximate final position on fuselage and cement the rudder in place. Now cement the stabilizer spar to the rudder post next to the top and block the leading edge to 0° incidence and cement..." 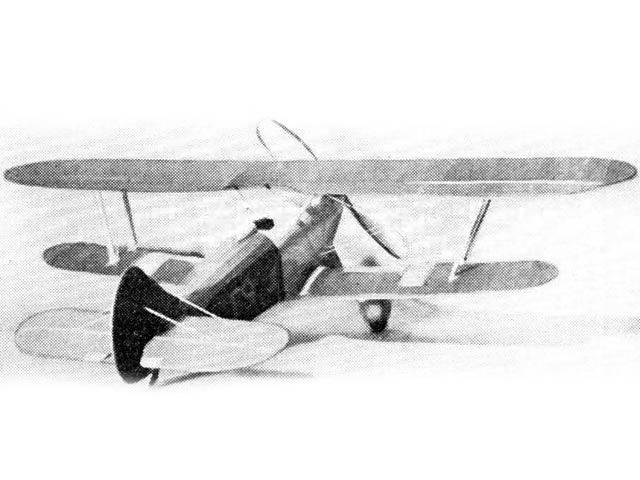