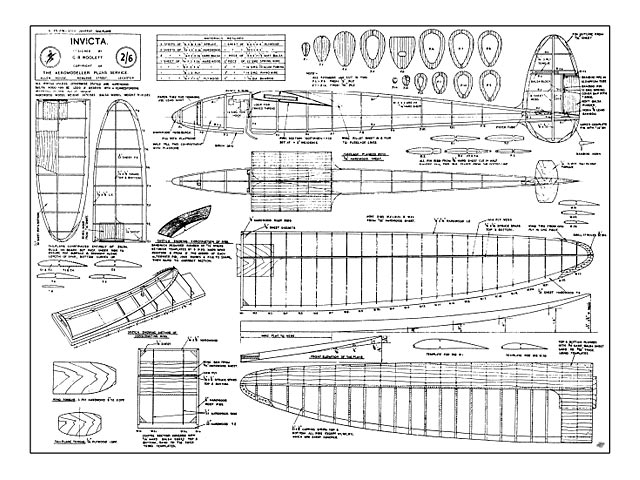 Fuselage. Pin in position the four backbone strips. The half formers are now added. Ensure that they are maintained at right angles to the building board while the glue is drying. Unless otherwise stated 'Durofix' is used on the hardwood parts. Slip a small piece of 1/32 sheet under the top of former F5 as this one does not extend to the full height of the fuselage.

When dry commence planking using strips of 1/16 hardwood sheet approx 1/4 in in width and varying with the fuselage curvature.

The port side of the fin is now built integral with the fuselage and for this purpose the ribs are cut into two halves.

Pin and glue the outline strip in position. Add the half ribs except 4B. The frame is completed by gluing the rudder post and the 1/8 by 3/32 spar in position. Before fitting the spar taper it at both ends on its outside from the end ribs to 1/16 thick. Steam it until it fits the rib slots and those in the fin outlined. The covering can be left until the fuselage is completed.

Pencil mark the portion to be cut away for the centre section on the port side, use mark previously made on F5 and F7 to assist in this.

Glue several of the centre planks on the starboard side and check the alignment of the fuselage by vetting.

Construct the tow hook and attach it as shown. Tie a length of wax thread to the wire loop on it and thread the other end through the paper tube to the rear of F13. Complete the planking, remembering to fill the first compartment and half of the second with plasticine. Add the paper ballast tube at the same time. This is glued to the front of F2. Drill the planking onthe port side to allow for filling with lead shot. Glue on the nose block.

Glue the remainder of the fin ribs, spar boom and webs, checking the alignment from time to time. Drill the backbone strips and glue in the aluminium bushes for the rudder. A small block from scrap balsa holds the end of the rudder bias spring and this should now be fitted.

Fit the tailplane tongue and ensure that it is at right angles to the fin. Ensure that the packing block is the correct size. R4b can now be fitted.

Cover the fin, commencing with a piece on either side to fit between R2 to R4. Cut the top, fit snugly beneath the tailplane tongue, then stepping it down in front and to the rear of R4.

Shape the rudder and fit the bamboo pegs and 24 SWG spring. When complete and doped the top corner must be cut out containing the peg, then the peg inserted into its tube, the rudder fitted and the two parts cemented together again. Make sure that the spring is coiled sufficiently and its end plugged into the block to bias the rudder to starboard..."

Note this a low resolution plan. 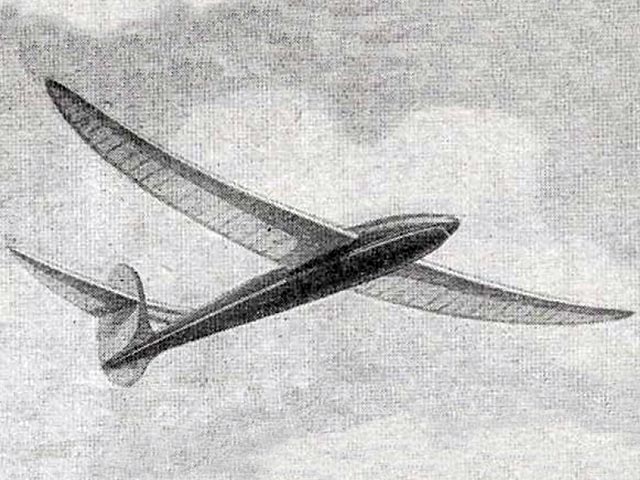