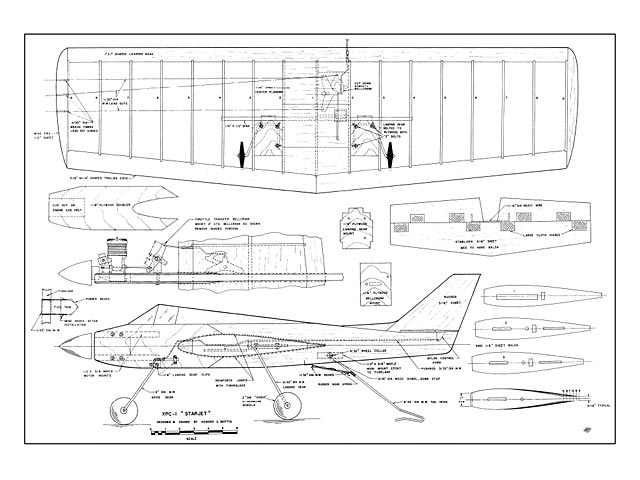 Quote: "You don't have to be a stunt champion to fly this fun-type craft! Starjet, by Howard Mottin.

THE trend in control line is toward simplification of design to enable more people to compete in a variety of events. These are primarily fun-type events that enable an individual to build a plane in a couple of days and still be on a competitive level. Following in the footsteps of profile Goodyear (an official AMA event for 1968) and the slow-combat event now under consideration, is a proposal for a Profile Navy Carrier event. Profile Carrier has been held at the Nationals for the last few years and as a junior event at quite a few local contests, but there hasn't been a definite set of rules to guide the event. Usually, the event is run under Class I rules, except for the deletion of the scale requirement. In the past, this has sometimes resulted in confusion as to what the aircraft requirements are. Also, this unrestricted event with high powered HO's and exotic fuels does not lend itself to a fun event.

As an effort to establish a fun type event for the Profile Carrier classification, a new set of rules have been drawn up and have been adopted by the Michigan Model Airplane Assoc for use in Michigan contests. The theme is to provide a simplified form of Navy Carrier competition, using readily available stunt or RC engines with easy-to-construct airplanes, for all age groups. This was not intended to be just a Junior-Senior beginners event, but an event for the Open flyers as well. Some of us old men are beginning to tire from holding onto that Rossi. Besides, I think it is more beneficial to Junior flyers to have the example of Open flyers in an event.

A brief summary of the Profile rules are as follows:

a) Three 60 ft, 015 lines required.
b) Engine limited to 36 CID stock stunt or RC engine without pressure fuel system.
c) Fuselage must be profile, with 23 in minimum length and height in proportion.
d) Minimum wing area 300 sq in, banning auxiliary lift devices.
e) Model to be finished in military colors and markings.
f) Stunt fuel only.

The chief reason for these rules is to place an emphasis on low-speed flying and to simplify the aircraft. Just about anyone can hang onto a plane going 100 mph, but it takes a greater skill at flying a plane close to 20 mph, especially in the wind. The rules define a size plane that is easy to fly and will look like a semi-realistic military type plane not restricted to US. By eliminating hopped-up engines and exotic fuels the event is further placed within reach of anyone. Furthermore, you don't have to be a stunt champion to fly the event; once you've mastered flying level you can compete. This should be particularly helpful to novice flyers.

Simplicity, durability and flyability are the keynotes of the design I have chosen for this event. Since the 'jet type' is currently the most popular plane, I chose this as a starting point. To further enhance this aspect I used a camouflage paint scheme. After a few trial sketches I discovered that my plane closely approximated the size of the old standby Sterling Ringmaster (oz3501) so I designed the wing with the same rib positions. Thus, those who don't care to trace out ribs and cut out parts from plans can use a Ringmaster kit and modify the kit to follow this design. My second plane was built in this manner and it was far easier to build, and required about half the construction time of the first plane.

Construction is easy and along conventional lines. I will mention particular points that specifically apply to the Profile Carrier event.

Wing: The wing construction is begun by laying out the shaped leading and trailing edges on the plans and cutting the notches for the wing ribs.. The ribs can be cut from a piece of 1/8 in sheet. The easiest way to make the ribs is to use a long plastic sweep or, if this is unavailable, to make a template from 3/32 plywood. Make the template to the shape of the upper edge of the number one rib..." 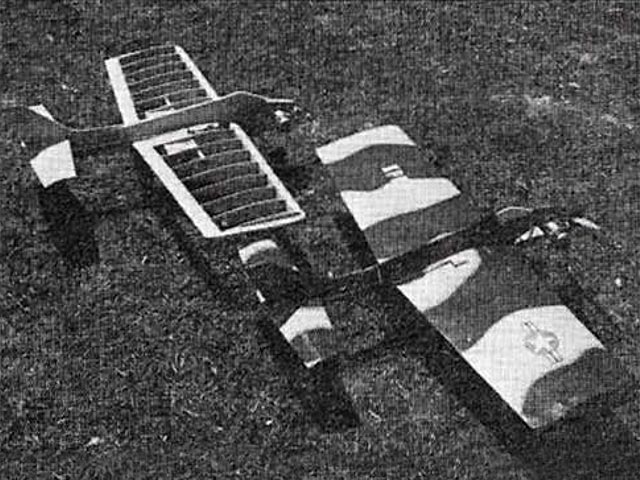