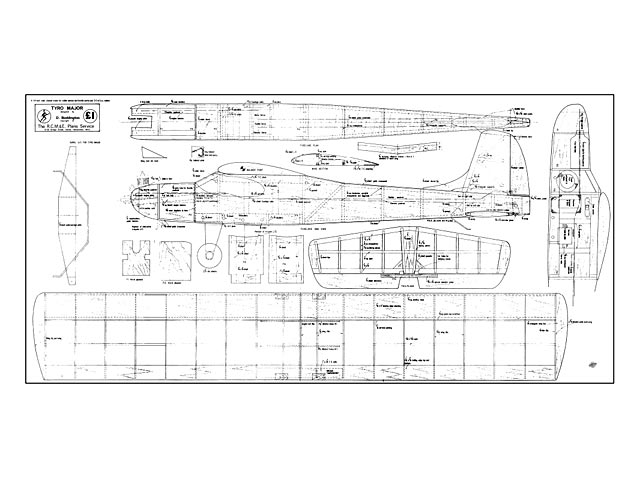 The 'Tyro Major' is an enlarged version of the popular Tyro design originally introduced in 1966. Many Tyro's have been flown with two- and three-function radio control installed but the wing loading of some of the models tended to increase to the extent where the normally docile characteristics were affected.

With the Tyro Major the additional wing area can cope easily with all modern radio control equipment and there is ample room in the fuselage to install the equipment without having to squeeze it in. By keeping the wing span to 54 in, it is possible to use a one-piece wing and still have a model that is convenient to carry about; another advantage of keeping the model to a medium size is that it is economic to build and fly. A 19 glow plug engine is ideal for the Tyro Major'although engines from .15 to .30 cu in can be used, with the larger engines the amount of side and down thrust must be increased.

The design aim was to produce a model with good stable flight characteristics suitable for a novice to have a reasonable chance of success. Construction, too, must be simple with the airframe rugged enough to stand up to most of the knocks that it is bound to get in the hands of a trainer.

Virtually any of the existing forms of radio control equipment can be used including single channel using escapements, motorised servos, magnetic actuators (double ended, high output) and pro-portional systems from one to four functions. It is slightly on the large size for Galloping Ghost unless it is limited to rudder and engine control only. For 'bang-bang' single channel control the area of the rudder should be reduced by using the top two inches of the rudder as a trim tab. Ailerons are not normally fitted to the Tyro Major but, if desired, strip ailerons (5/8 x 3/32 spruce) can be incorporated on a wing with reduced dihedral (approx 2° per panel).

Before commencing construction, thoroughly familiarise yourself with the drawings, instructions and photo's and ensure that all stages of construction are fully understood. Cut out all sheet parts as this will save time at a later stage.

For the majority of constructional work a white PVA glue, such as Evostick Resin or Bostik Carpentry adhesive, is recommended. Exceptions to this are the joints between the engine bearers and the 3/8 nose doublers, the bearers and formers F1 and F2 and the plywood undercarriage plate to the underside of the fuselage. For these joints an epoxy adhesive, such as the new Bostik quick set epoxy adhesive, should be used as it has better 'gap-filling' properties, is stronger and is more resistant to fuel. Some modellers prefer to use an impact adhesive for large doubler areas, ie the 3/8 sheet nose doublers to the 3/32 fuselage sides, but great care must be taken when placing the two surfaces together that they are in exactly the right position. The easiest way to achieve this is to place a piece of greaseproof or waxed paper between the two glued surfaces, after the adhesive has 'dried', and gradually with-draw the paper checking that the doubler is correctly positioned before withdrawing too much of the paper. PVA glue can be used for these doublers but remember that it will take a very long time for the glue to dry where the air cannot get to it; the side/doublers should be left, preferably lightly clamped together, at least overnight.

Although PVA glue does not dry as quickly as some other glues, ie balsa cement, this can be an advantage when-tackling some of the slower jobs such as fixing the leading edge sheeting to the wings. In most cases the glue will be sufficiently dry to allow parts to be unpinned from the building board after about two hours.

Select the wood for the various parts of the model carefully and, in particular, try to get the quality of wood the same where they are 'paired' on the model, ie fuselage sides, left and right-hand wing spars, leading edge, fuselage longerons, etc. Keep the weight to a reasonable minimum but riot by using the wrong strengths of balsa wood. It is not easy to specify exactly the right type of wood by labelling it medium or hard, etc; if you are building the Tyro Major from the plan tell your supplier what the wood is needed for and, I have no doubt, he will assist you in choosing the right grade. A last plea before we start a detailed description of the construction, the finished model will only be as 'true' as your building board, so do make sure it is absolutely flat and level. 'K' quality hardboard makes an excellent surface for building on, it takes pins just right, and if this is bonded to a flat surface, like marble, you have the perfect building board.

So, pin down the plan, rub over the building area with hard soap (to prevent the glue sticking to the plan) and off we go. On the basis of one picture being worth a hundred words, we will try to keep the words down and give you plenty of pictures..." 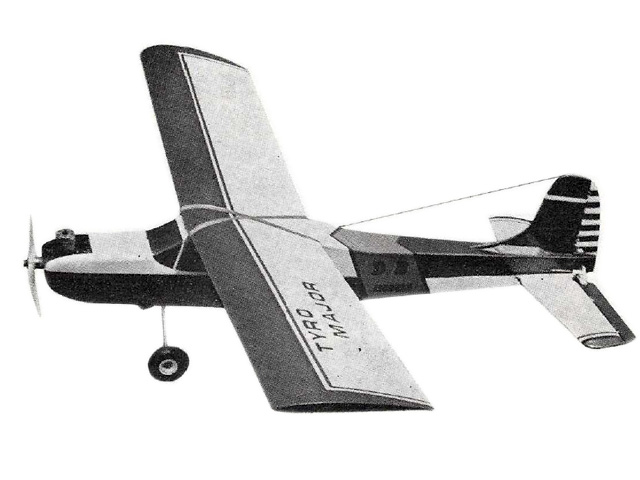 I owned and flew a Tyro Major in the late 70s, and yes it was a very nice airplane - but i have one remark-mine was equiped with a O.S. Max.25 and when i think back...it was a bit on the weak side - especially after a handstart it needed to gain speed first in order to be able to make a safe climb-out. I wouldn't advise a .19 more like a .30 or even a bit higher (better some power in reserve -you have throttle to dampen power). If I was to make one again, I'd use a .40 like the LA series... just my 25 cents.
De Causemaecker Rudi - 04/08/2019
Worth mentioning (for completeness) that DB Sport and Scale can supply a slightly different plan of the Tyro Major than the one published in RCME. It shows a piano wire undercarriage and a different layout of the parts with some other minor differences. I expect that the Sport and Scale plan was originally supplied in the kitted version but it's nicely drawn (better than the RCME version in my opinion). Also worth noting that this model requires 6" wide balsa for the fuselage (not obtainable in the UK at the moment as far as I know) so be prepared to splice some narrower balsa sheet edges!
DeeBee1 - 04/02/2020
I've built and flown a Tyro Major built from the DB sport and scale plans - it IS possible to use 4" sheets for the Fus. sides with careful positioning. I flew mine with an OS25LA - initially it had a 9x6 prop and seemed underpowered, but I changed this to a 10x4 and WHAT a difference! It had plenty of pull right through loops and could be rolled ( a bit barrelly!). I believe an OS40LA would overpower it, and you would need to re-think the structure somewhat. It became my favourite grab and go glow plane for a while, until I crashed it trying to roll downwind at too low an altitude. Would thoroughly recommend gluing the tailplane on, as the rubber band mounting I had often needed re-trimming. Great plane though, and not just for the beginner - a great hack.
Nick Ward - 15/03/2020
Please find attached a couple of photos to add to your Tyro Major plan [pics 005, 006] to supplement the comment I posted on 15/03/2020 - apologies for forgetting to send the pics at the same time. Best regards, and keep up the great work you do.
Nick Ward - 28/06/2021
Add a comment