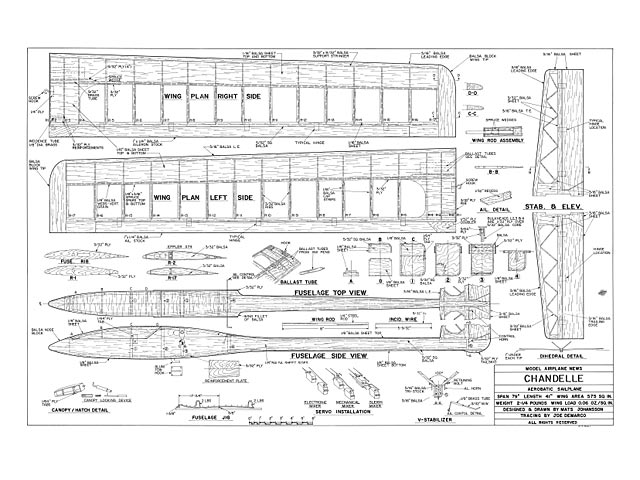 Quote: "A Sailplane for aerobatics from Sweden. Chandelle, by Mats Johansson.

A few years ago I had the opportunity to fly as a passenger in an aerobatic flight with a full-size ASK-21 sailplane, The pilot was a flight instructor who showed me all the plane's tricks: hammerheads, loops, rolls and inverted flying. This flight so impressed me that I got the idea of making a model sailplane with this aerobic performance. First, I thought the aircraft needed a wide speed-range: and I consequently searched in every airfoil book I could find. Then, in a German book with different airfoil sections, I found it: Eppler 374 'Mit guten Ruckenflugeigenschaften' (with good inverted flying capabilities) it said.

Then I started to sketch out a V-tailed design with 78 inches span. About 12 months later, the prototype was ready to be test-flown. The test flight was a success. The plane looped easily and there was no need to dive vertically to obtain the necessary speed. Just a little forward pressure on the stick - and then pull back! The rolls are equally simple to do. You just dive gently, raise the nose a bit and then push the stick over to one side. To see a sailplane roll is very nice, and the Chandelle does it just great. When flying the Chandelle inverted, you only need to make a slight adjustment on the elevator trim to keep the plane upside down.

The Chandelle can do all pattern maneuvers, including outside loops, hammerheads and hesitation rolls, but it can't do spins. That's why you make low-speed landing approaches with your Chandelle without fear that the plane might tip-stall and spin into the ground at the final turn, Instead, it has very good stall characteristics: it just drops the nose a bit and continues to fly.

I've avoided using materials that I feel are hard to work with, like glass and carbon fibers. I've used only ordinary construction materials - balsa, spruce, and plywood - to make it easy for you to build your own Chandelle. The wing is built-up around a strong I-section of spruce and balsa that is reinforced at the root with plywood webs. When assembled, the wing is absolutely flutter-proof. The E-374 airfoil gives the Chandelle an extremely good performance..." 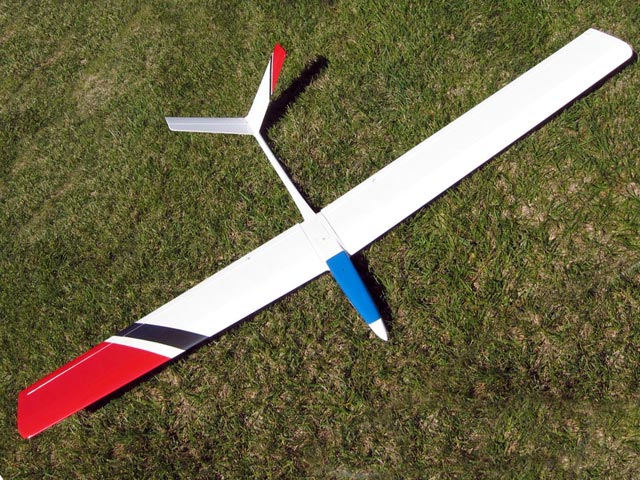