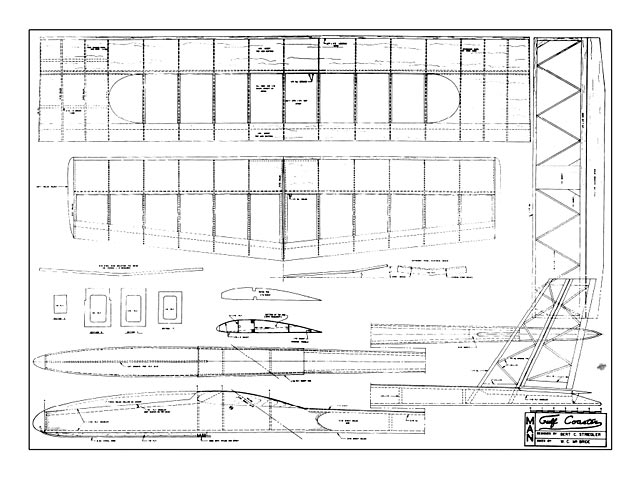 It is usually appropriate to start a construction article by telling what a super airplane the clever designer has painstakingly developed through a series of 25 developmental models. Still-air tests, glide-ratio tests, trips to the local university to borrow computer time for refining the modified airfoil - nothing daunts our intrepid designer. The result is said to be an airplane that out-turns, out-tows, out-glides, out-runs and out-thermals everything on the field - perfect for slopes or flat lands.

If that is the kind of glider you are expecting, then the Gulf Coaster is probably going to be a big disappointment to you. It is really not the best of anything, but is instead a compromise glider that has good all around performance combined with standard construction methods. It was designed by experience, and there were no developmental models. The very first Gulf Coaster ever built is still flying, but I have to admit it looks pretty tough after nearly three years of banging around! Several variations were tried later, but the original version flies just as well under the variety of conditions for which it was designed.

I won't bore you with a lot of design talk, but a brief description of the philosophy be-hind the success of the Gulf Coaster might be of interest. Here in Houston, our climate is a mixture of wind, humidity and heat, but we have surprisingly few days of really good thermal activity. The tettain here is green and flat. The Gulf Coaster was designed to cope with these conditions. It has a light wing loading and is large enough to handle a lot of wind. It is stable, and large control surfaces combined with generous polyhedral enable it to be flown in very tight circles to stay in small thermals. Strength is important in our gusty climate, and the Gulf Coaster is a strong airplane that will take all that your winch or high-start can put out. The wings will not flutter in a vertical dive, so feel free to split-S out of a thermal if you want to!

The wings are scientifically designed to about a 9 ft span. By 'scientific' I mean that I hate to waste balsa, so the center panels are each 3 ft long, and the tip panels are 18 in. No wasted spars or planking to disturb my pinch-penny disposition! A generous amount of washout is built into the tip panels for good stability, but because of the way the tips are constructed there is no danger of the washout warping out.

You may question the use of the good old 12% Clark Y airfoil. The first Gulf Coaster used this airfoil and flew very well, but we got fancy and used an 8% Gottingen 795 on the next one to get even better penetration, and guess what? It was slower, did not penetrate as well and evidenced tip stall problems. The Clark Y works well, so we went back to it on the rest of the airplanes. I'm not saying it's the best glider airfoil, but it is as good as anything else we have tried on the Gulf Coaster.

The fuselage is a simple box that is large enough to hold any popular radio. There is also plenty of room for a spoiler servo if you feel the need for one. One Gulf Coaster not only had spoilers but also had another servo installed to operate a tow hook release. Another had a ballast compartment near the center of gravity that allows the addition of about 6 oz. of lead for those very windy days we occasionally have here.

To top it all off, there have been several 1-1/3 scale Gulf Coasters built. The first was enlarged by my friend Bob Grundy, from standard plans. Every dimension was simply increasad by 1/3..." 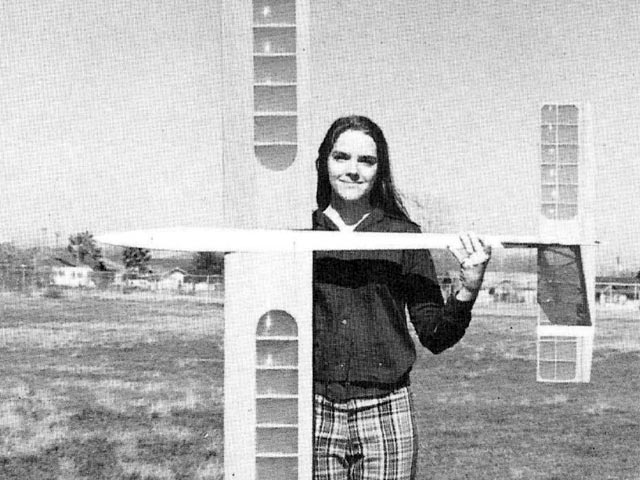