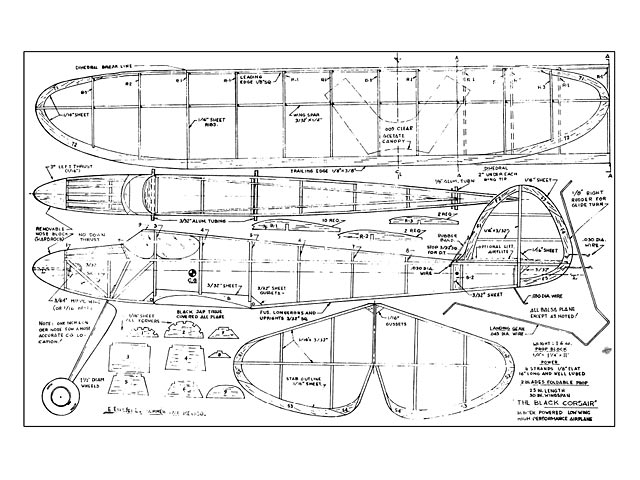 Quote: "Put some fun in your free flight with this exciting rubber-powered low wing Free Flighter even more excitingly named - it's a winner all the way!

This ship was part of an extensive experimental program to study the possibilities offered by the low wing configuration at model fields. It seemed at first glance that motor thrust line above wing-line should give an effective natural downthrust, meaning no more problems with undesired loops or power stalls at zero settings of thrust line and stabilizer - when power climbing you use all the power packed in your motor since the thrust is not against the wing's natural forces nor against the corrective force of stabilizer, given more speed at less motor power.

At greater speeds, there is more down-pulling effect, evident when you use a high performance propeller, and a great number of strands of rubber strips, and with the aid of a lifting stabilizer, no stalls developed at any time.

Now for the torque: since we have a relatively high center of lateral area in relation to thrust line and well aft of the center of gravity, all forces align better than on some other possible combination. As a result we have a much steadier, steeper and faster climb, no matter whether the turn is to the right or left.

Another point of view about L/W's is its dihedral - this plane does not demand an ample degree of wing dihedral; to the contrary, it asks for less, and consequently requires less rudder area. We positively believe that if the minimal dihedral possible is used in a plane, you will have more usable wing area at glide, less drag in glide and climb, notably increasing the efficiency in every respect. And with less rudder area you subtract drag and rearward weight.

Stimulated by our tests and the results ob-tained, we started building powered low wing planes - rudder-powered, gas-powered, all of them contest rank, some Wakefields like 'Magnus IV,' some 1/2A's like 'Spectre,' with TeeDee .049 engine.

With all this experience under our belts, we present you with this low wing model, inspired by Chuck Hollinger's memorable Cruiser (oz1180), our old-time favorite, re-designed and with some improvements. We heartily recommend the use of a dethermalizer device, since this ship is a serious black menace at any contest, and very easily swallowed by some hungry cumulus cloud. 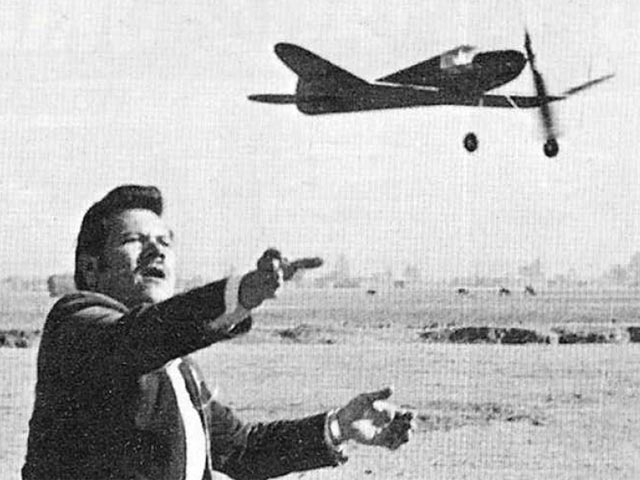