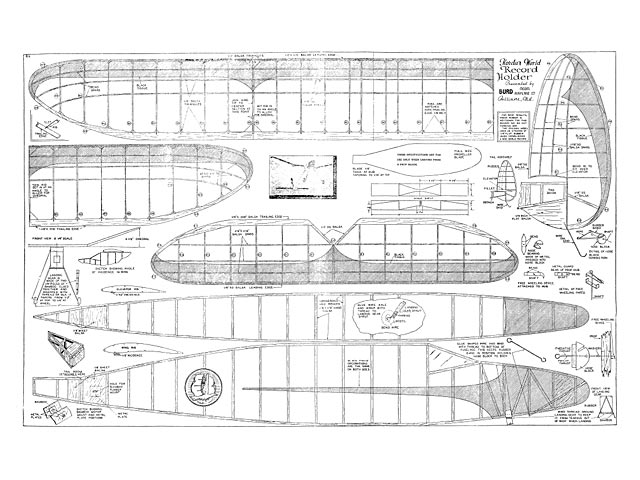 Quote: "Complete plans for reproducing one of the finest new weight-rule models that appeared at the 1937 Nationals - the 18th consecutive Air Trails trophy-winning model. By Richard Korda.

DURING the 1936 Nationals in Detroit, Korda flew a fuselage model out of sight after twelve minutes. Several weeks passed without news of the model. He had given it up as lost when he received a letter from a farmer living about ten miles from Wayne County Airport. The farmer had discovered the model while he was harvesting his wheat. He managed to catch a glimpse of it before it disappeared into the binder. Unfortunately, he didn't see it in time to stop the machine. The only part of the model which was salvaged was the return slip containing Korda's name and address.

Flying models out of sight is a favorite Korda pastime. During the past several years he's turned in many long flights. Last July in Detroit he set a new fuselage model record of 54:13. This flight was the longest of the meet and is the highest official NAA record turned in under the new weight rules. Korda competed in the open-class cabin fuselage event.

During the 54-minute flight the model covered 5-1/2 miles and was recovered undamaged, In the afternoon of the same day the model flew out of sight after eighteen minutes to place third in the Moffett Elimination contest. For the Moffett finals Korda was forced to substitute an old model for his lost Elimination job. He placed fifth in the finals. And, ironically enough, his 54-minute model was returned to the airport immediately after the contest.

In the last three National meets, Korda has had five out-of-sight flights. Four of these wandering models have been returned safely. The fate of the fifth was described in the beginning of the article.

Korda has developed a fine contest-flying technique. Under his care a model delivers its peak performance. A simple, rugged, dependable model expertly handled is his formula for winning contests.

The rear rubber hook is an interesting departure from the conventional design. A bamboo piece 1/16 x 1/4 x 2 in inserted through notches in the sheet balsa sides 1 in from the rear of the fuselage. The bamboo rear hook provides more bearing surface for the rubber and prevents cutting. Aluminum plates are cemented to the inside of the fuselage to prevent the bamboo stick from cutting the balsa.

Cut the nosing from a block 3/4 x 1-3/4 x 11/16 in. Cement a piece of 1/4 in flat balsa to the inside of the nosing to fit inside the fuselage. The nosing is attached by a rubber band, which fits into a notch in the nose block and extends to the bottom of the fuselage where it engages a wire hook cemented across the bottom. The propeller bearing is made of brass and pressed into the nose block. Punch the hole through the nosing to give the propeller shaft 1° negative and 1° right thrust.

LANDING GEAR Bamboo struts are tapered from 3/32 x 1/2 to 3/32 x 1/4. They are cut to an oval cross section. The struts extend 9 inches from the fuselage with a tread of 11 inches. Wrap thread from one strut to the other underneath the fuselage to prevent tearing out the struts on hot landings. If cemented thoroughly, no additional binding is required..."

Quote: "All, I bought this plan in the mid 1980's from my long distance friend, the late C.F. Schulz. Charlie had a hobby of restoring original plans the old fashioned way, not using electronic means. I had always wanted to build this model, and did back in 2003. Burd Models / Kramer Brothers were two Brothers who ran a kit and wholesale business, eventually right about the end of the second world war, dropped the kitting business. I feel that this model was kitted to capitalize on the 1939 Wakefield contest won by Dick Korda. The Record Holder is a wonderful flyer in it's own right. Kramer Bros picked a good model, but kitting rights were owned by Megow for the 1939 Wake winner. Enjoy, Best regards, jeff" 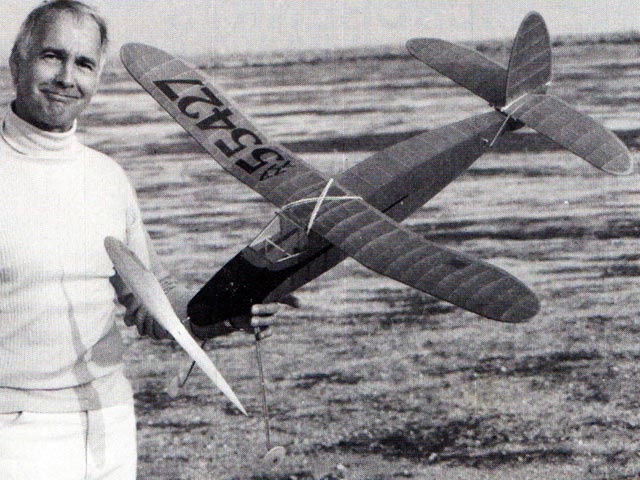