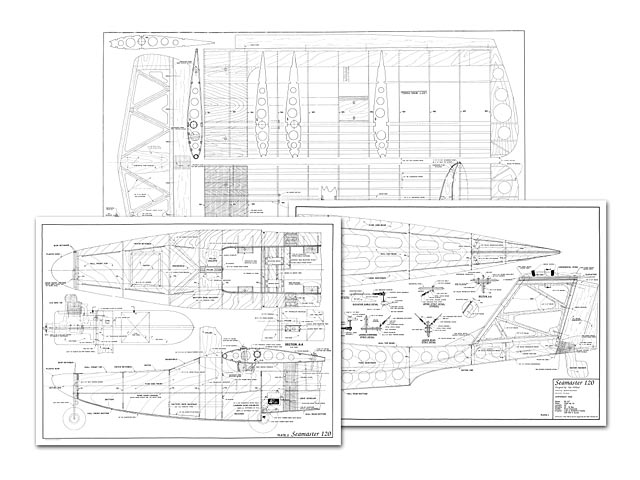 Quote: "The Seamaster 120 has a pylon mounted engine and a 'T' tail that stay out of spray while accelerating. A very high lift wing and double stepped hull make it very quick to get up on plane and break water. A retractable water rudder makes water handling at slow speed no probem.

The Seamaster 120 utilizes lite ply construction throughout, this plane is built to take it! Lock tab construction adds in quick warp-free construction. A two-piece wing joined with T-6 aluminium tube and a removable tail make tranportation a bit easier. All control surface hardware is included in the kit.

The Seamaster 120 will also fly off land. The landing gear hardware is offered as an option which includes all the necessary hardware to make the Seamaster a true amphibian. Once the landing gear option is sinstalled, it can be removed in a second to convert to a seaplane. If you like to have the flying stopped (and have all ayes on you and your plane) when you show up at the lake, you're ready for the Seamaster 120!" 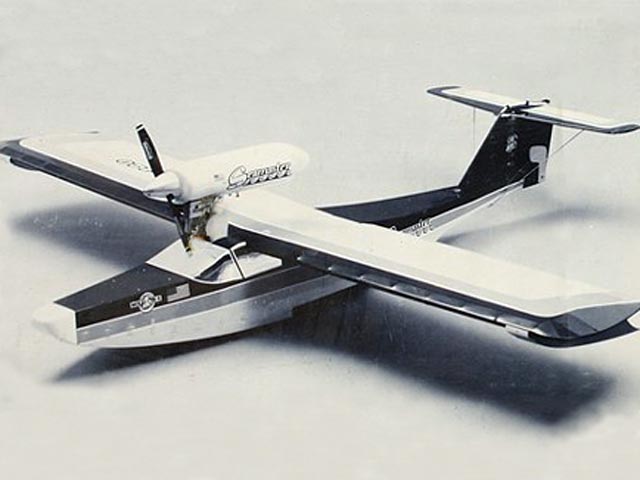 This is more a comment than a correction on the Seamaster 120. However, if heeded, will lead to several corrections. When this plane first came on the market, I was an ACE dealer and like another dealer, in the USA, we could not wait to test it. So we each built one, being the first two on the water. Could have been much improved prior to release. Too much plywood - almost every part - meant an extremely heavy plane. My recommendation is to eliminate it in most places, including the wing ribs, minor bulkheads and especially the tail. It makes the tail end too heavy and very weak by placing the heavy horizontal stab on top of the flimsy, heavy vertical fin. Those heavy, poorly fitting brace wires don't help much. In fact, they shake and rattle so much when the engine is running that you may even generate RF interference due to the metal to metal contact. The clevises do not fit their straps properly. And the vertical fin must be strengthened to hold the stab without shaking. Also, the choice of wood for the engine pylon was weak and flexible. My first engine was a Super Tigre 2500 which proved totally inadequate for power. It was replaced by a Quadra 42. Both the other builder and myself then experienced extreme problems with flying, especially in turns. The plane would not fly properly no matter what we did. And for me, that was the case with both the Super Tigre and Quadra engines. There were continuous calls to ACE and between us to sort it out. Ultimately, the only solution to get a somewhat proper flight was to add a large dorsal fin, from about half way up the existing vertical fin to almost the trailing edge of the wing. The big issues were overall weight and improper attitude in and flight in turns. I also believe that the claim of flying this plane, as designed, on a 1.08 2 stroke or 1.20 four stroke engine is quite a stretch. It needs more power and thrust, as provided by the larger displacement and prop of the Quadra. There is no substitute for cubes.
MatthewStikeman - 21/01/2019
Just a note. The Seamaster 120 (ID 10817) presented here is a enlarged version of the Seamaster 2 (ID 5899) published in the May, 1984 issue of RCM. As the plan details are similar, the article and building instructions for the smaller (48-inch) Seamaster 2 may be useful to anyone building this larger version. Best complements,
davidterrell80 - 23/01/2019
Add a comment