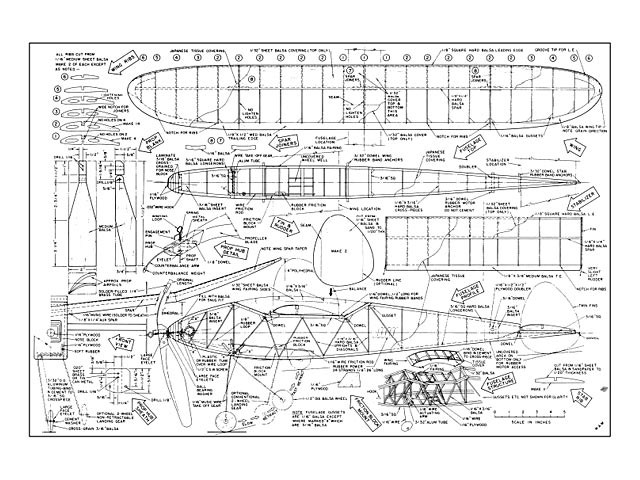 Quote: "I WOULDN'T be surprised if the majority of today's modelers who build and fly the most ultra-sophisticated radio-controlled giants have never experienced the exciting challenge and the satisfaction of designing, building, and flying a high-performance rubber-powered model. The model presented here represents an advanced state-of-the-art example of a very popular size and class of competition rubber-powered free flight model of the 1939 to 1940 era. Before we get to our construction project, a few words about high-performance rubber-powered models are in order for the benefit of readers who are not familiar with this fascinating and long-time favorite activity of our great hobby.

Rubber-powered flight, since its development by William B Stout, has stirred the imagination and challenged the ingenuity of both young and old model plane enthusiasts for well over three-quarters of a century. The astounding burst of power from takeoff through the first few seconds, the gradually diminishing power as the flight progresses, and the overwhelming drag of the enormous propeller when power stops are problems not evident in engine-powered flight. These problems have also kept rubber-powered models in the forefront as one of the most aero-scientific segments of the hobby, even after the advent and growing popularity of engine power. Of course, rubber power is restricted to free-flight operation. Despite the fact that most national contests still include rubber-powered competition which attracts a good number of enthusiasts to events such as the Muhlville Trophy, plus the encouraging current interest in Peanut and Walnut rubber-powered scale, the specially designed rubber-powered free-flight model has been so surpassed in popularity by the Ukie and R/C engine-powered craft that it is, to many old timers, but a fond memory of pre-WW II model aviation.

Free-flight endurance has always been the primary, but not the sole, objective of rubber-powered flight. As with all endurance designs, in order to attain this objective it became necessary for the designer to make his model reach the highest altitude possible during the powered phase of the flight in order to enjoy the longest possible gliding time and improve the chances of finding and riding a 'thermal' or rising current of warm air. This required a fast-climbing powerhouse that had to convert into a soaring glider when the rubber motor was exhausted.

The conversion of the unwinding rubber motor's energy into efficient thrust fell to the propeller, whose design and development began to rival that of the model design itself and propellers grew larger and more sophisticated as the art of rubber-power progressed.

Rigid rules were formulated to govern the design and operation of contest jobs; the principle aim of which was to give everyone the same chance to win by basically limiting the wing area in each class and requiring a minimum fuselage cross section for ROG cabin designs. These regulations stimulated the designer's imagination to improve performance, giving birth to innovations such as:

1. Free-wheeling propellers in which the propeller disengaged from the shaft as soon as power was depleted and was then allowed to turn in the slipstream, thereby reducing the drag considerably.

2. Folding propellers followed in which the blades folded flush with the fuselage when power stopped, virtually eliminating propeller drag during the glide.

3. The fast-turning large diameter paddle-like propellers, which were required, churned the air so much that as the propeller rotated, each following blade operated in the 'wake' or agitated air caused by the other blade moving ahead of it. This is because the model doesn't travel far enough during each revolution to move each following propeller blade into undisturbed air, One solution was to gear down the rpm of the propeller. Many designers tried this approach and met with some success. Other designers adopted the counterbalanced single-bladed propeller, which proved very effective by allowing the model to advance twice as far through the air before the propeller blade completed one revolution by which time it cut into relatively undisturbed air. The condition in which blades of a propeller operate in a fluid disturbed by the path of the previous blade with the resultant loss in efficiency is called 'cavitation.'

4. The wing area in each class was limited to a maximum figure because a model with more wing area than its competitors has a distinct advantage to win. In order to enlarge the effective wing area and still meet the rules, some designers employed an airfoil in the stabilizer which area often equalled half of the wing area. This contributed so much lift that the center of gravity had to be relocated from the normal one-third of wing chord location back to the wing trailing edge because the center of lift moved to aft of the wing due to the stabilizer lift.

5. The rubber motor also underwent improvement. As rubber-powered models grew in popularity, rubber companies developed rubber that would withstand the friction of winding and resist fatigue after repeated flights. US Rubber developed the T-56 brown and Pirelli black strands then became the favorite during the immediate pre-war period.

Care of the rubber motor was of paramount importance because the intense friction built up in winding caused the score or more of strands to destroy them-selves—they actually cut each other. This was relieved by using rubber lubricant that was rubbed on each strand after the rubber motor was made up. The lubricant was a mixture of three parts of tincture. of green soap to one part of glycerine; items available at any drugstore. Eventually, ready-mixed rubber lubricant became available.

Extreme care was used in making up rubber motors in one long strand that was looped as much as twenty times to make forty strands. The knot, which was a work of art in itself, was always at the rear anchor so it didn't rotate. It was very important that all loops in the rubber motor were the same size, which required two people to rotate the motor on their combined forearms, much like a taffy-pulling machine. Once the motor was ready for installation, each end was bound with a length of left-over rubber to form a small loop at each end which facilitated installation in the fuselage. Later it was found that once all the loops were the correct length, the rubber motor would deliver maximum power for a longer time if it was lightly braided before installation!

This model is a Class 'C' Cabin type that was designed in 1939 and earned me a first place trophy in the spring of 1940. The three-flight average endurance time was 3 minutes and 28 seconds with the official flights turning in 4:57, 3:22, and 2:05. Class C Cabin was a very popular size in pre-war rubber-powered endurance contests because it formed a convenient and economical package with excellent performance for its size.

The larger Class D generally turned in longer flights but the expense of a larger propeller block, more rubber, balsa, and dope made many unsubsidized modelers turn to the small class for equal enjoyment.

Class C wing area could not exceed 150 square inches, projected, which generally produced a wingspan of about 3 feet. Our model has a projected wing area of 142 square inches with a modified RAF 32 airfoil that gradually flattens as it approaches the tips. That portion of the wing buried in the fuselage is not included in the wing area calculation. The perfect configuration for dihedral is an ellipse, therefore - except for a Ritz or Murray-type wing - polyhedral is the most efficient conventional structured wing and this became virtually standard design practice on all free-flight designs.

'Cabin' class did not mean that the model must have a cockpit-cabin, but that the minimum fuselage cross section could not be less than the result of this formula in square inches: fuselage length, in inches, squared or multiplied by itself and the answer divided by a constant; 100. Applied to this model it would be 29.5 x 29.5 = 870.25 100 which comes to 8.7 square inches. Because I shaped the fuselage in such a manner to generate lift, following the Vincent Burnelli theory for full-size aircraft, the model exceeds this by 2.5 square inches.

Cabin class also specified that the model must ROG or take off unassisted using an attached landing gear. Although earlier versions of the design used a conventional two-wheel landing gear, which was then converted to a single wheel, the model shown here sports a retractable single-wheel landing, or more correctly, take-off gear.

The idea of a retractable landing gear for rubber-powered models is not new, however, most gears snap up against the fuselage with considerable speed and force. This makes the model difficult to launch, despite the fact that competition rubber jobs literally leap off the ground at the moment of release. This is because many take-off gears retract prematurely, before the propeller has cleared the ground. As far as I know, this model was fitted with the first and only slowly-retracting take-off gear. The operation of this mechanism proved successful and has the advantage of starting to retract slowly and then speeds into final position as the craft enters its climb.

CONSTRUCTION. The structure is very conventional and straightforward, and uses balsa, Japanese tissue, and wire. The normal structure for fuselages of this type and size is 1/8 square balsa throughout. In view of the fact that the longerons absorb most of the load, I made them from 3/16 square balsa and used 1/16 x 3/16 uprights, cross pieces, and diagonals in a combination of Pratt and Warren trusses. This construction proved successful on many designs. The fuselage design prevents the upper longerons from being constructed in one piece, therefore it is advisable not to neglect the fillet-type gussets shown on the plan. These add considerable strength to key joints. The wing is a simple single-spar design with a sheet-balsa-covered leading surface instead of using false ribs..." 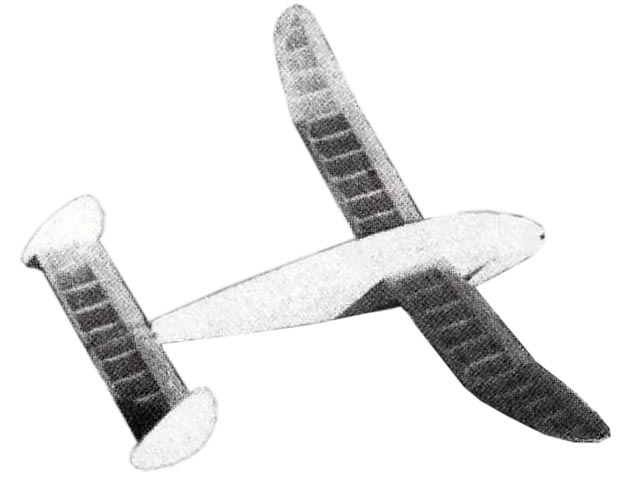