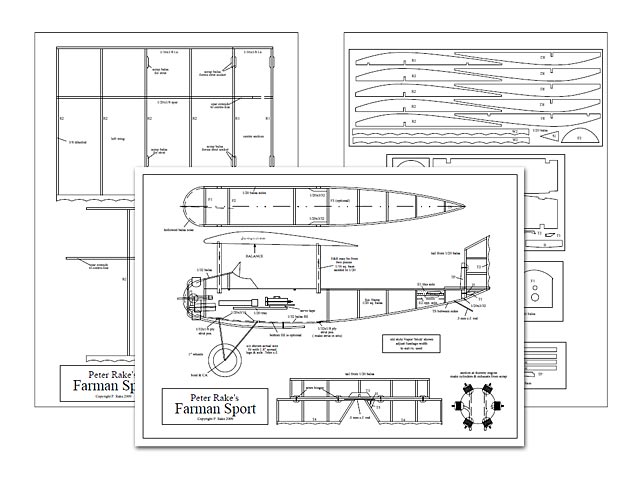 Quote: "A Farman Sport for you to build. By Peter Rake.

I've persuaded (conned) someone to build the model and supply me with photographs. For that, thanks go out to Phil Burress.

THE MODEL: The story behind this model is quite simple really, it's a scaled down version of one of my other designs. It's always been a popular type with flyers of small rubber power models, because you get massive (relatively speaking) wing area in a small span. To demonstrate what I mean, although this model is only twelve inches span, its chord is over four and a half inches. That's as much area as is common on models half as big again. Considering that it's only supposed to end up weighing in the region of 30g, that equates to a wing loading of less than three ounces a square foot. Not a Vapor by any means, but there is somewhat more structure than with a Vapor.

The build came about when Phil mentioned how much he was enjoying flying his Estes Tiger Moth. He persuaded me that I really needed to try one for myself and, knowing I was into designing small models,. asked if might have any plans he could use. That, for the moment was that. I sent Phil the plans as part of a batch and never thought any more about it. About a week or so later, Phil contacted me again to say he loved the look of the Farman and asked if I'd like build photos. Well, never being one to turn down such an offer, I promptly told him I'd very much like the photos. The result of all this electronic to-ing and fro-ing is what you see here.

You'll notice that most of the ribs and other parts are shown as 1/20 balsa (available from such people as SAMS, who specialise in such things). I hasten to point out that this plan was drawn up before I'd begun to play with little models and it seemed like a good way to save weight. I was hoping to fly the model indoors, in a fairly small hall. As such, every gramme that could be saved needed to be saved. As it turned out, the hall was too small for such models, which accounts for it not getting built sooner.

Anyway, the point I'm trying to make is that unless you are experienced at building and covering such lightweight structures, opt for 1/16 balsa instead of 1/20. It's cheaper, easier to get, and results in a much easier to handle model.

Phil actually went the other way on his model, making the forward fuselage sides and wing ribs from 1/32 sheet. However, he was intending to cover his model using pre-shrunk tissue. Which, as luck would have it (or was it planned that way), leads us into the next topic.

Covering: As I said, Phil used pre-shrunk tissue on the wings of his model, finished with a couple of sprayed coats of acrylic lacquer. However, it
should, with care, be possible to cover them in the traditional way using doped tissue. The only point you need to bear in mind is that you will need to take care not to induce warps. Carefully applying lightweight tissue (Esaki), only using VERY thin dope as a finish and ensuring the wings are securely held while they dry. The lightweight tissue shouldn't exert too many warping stresses, especially if you take care to apply it with even tension in the first place. The very thin dope, of which you'll need a couple of extra coats, helps prevent the tissue shrinking too aggressively and the secure fixing helps make sure that nothing can warp. I normally leave doped wings pinned down for at least three days, to ensure that any shrinking that is going to occur already has done by the time I remove them from the board.

Although you need to exercise care covering the wings, the rest of the model should pose no great problem to cover.

An alternative, if you intend only to fly the model indoors, is to forgo the doping entirely. Undoped, printed tissue works just fine on these little models - as demonstrated by The Knight (oz10808) which appeared here a few months ago.

Equipment: As you'll see from the photos, Phil went his own way with certain aspects of the installation. Since the gear he used came straight from a Nite Vapor fuselage, he left the receiver mount in place. This meant that it was sufficiently wide not to require the receiver/battery tray. Just a couple of small rails are used to which to attach the receiver and a couple of crossrails, in conjunction with the original model's battery holder, provide somewhere for the battery to lodge. It probably works out a little heavier than the installation shown, but it has to be a very minimal amount heavier. Since Phil wanted his model for back garden flying, rather than indoors, it isn't a problem.

As regards the motor, that too is the stock Nite Vapor item, but fitted with the Parkzone Cub prop. This prop is a smaller diameter than the Vapor prop, but has considerably more pitch. It has worked out extremely well on this model.

The motor installation couldn't really be much simpler - it's glued into the mount plate (former F1) using an easily-removed glue (Goop). This enabled Phil to fine tune the thrust lines during flight testing, finally settling on around four degrees down and right. As you can see from the videos here http://www.rcgroups.com/forums/ showthr... it worked out pretty well. So, with all the intricate details explained and warnings given, I suppose it must be about time to actually detail building the model..."

Note this plan was released into the public domain by Peter Rake, posted online at rcgroups.com/forums/showp... in September 2014. 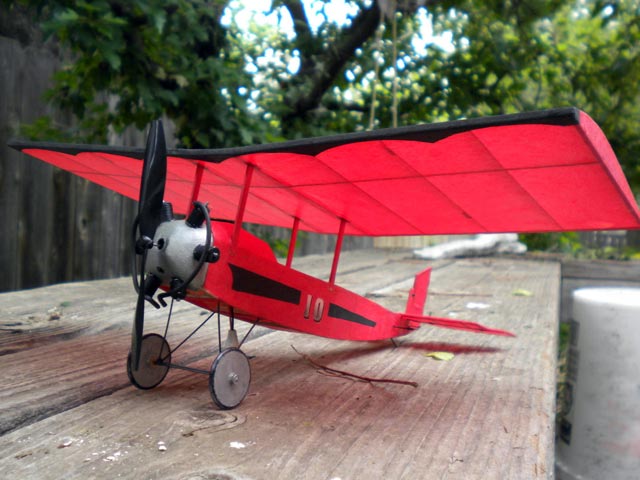