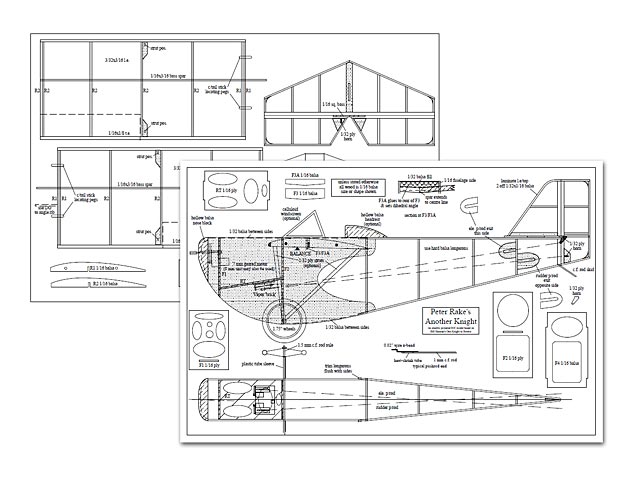 Another Knight. Sport model for micro-RC using a PZ brick or similar setup.

Quote: "By way of a slight change to the normal run of things (a change being as good as a rest), while still giving you a model to consider, here's the first part of a construction article and plan for my latest creation; an electric powered radio model heavily influenced by Bill Hannan's One Knight in Boston (oz3618).

I first spotted this model in a book of rubber power models several years ago and it immediately struck me as being an attractive, if somewhat quirky, looking model. Since actually like quirky models, and this one definitely appealed to me, it was a foregone conclusion that sooner or later I was going to build one for radio control. The only uncertain factors were when, and how big it would end up being. Currently being on a small model 'kick', this seemed like the ideal opportunity to import Bill's plan into CAD and proceed to butcher it to suit my needs.

THE CONVERSION: No, nothing to do with 'seeing the light', just fiddling around to turn a rubber power model into a radio controlled, electric powered model. As anyone in the least familiar with my designs will know. I have certain ways I like to do things. I like a solid sheet balsa area at the front, onto which l can hang all the hardware, as a main priority. I also like, if at all possible, to make as much of the model self-aligning as I can. To retain the 'feel' of the original model, this was restricted to arranging a system whereby the dihedral and incidence are set as you glue on the wing panels. Everything else remains pretty much as per the original model. The only obvious changes involve providing control surfaces and exits for the pushrods.

Throughout the build I ask that you bear one thing in mind - that this is still essentially a rubber power design. Treat it as such, and fly it as the original would be expected to fly. As a gentle, radio interrupted free-flight model, it works well. Try to hurry it and you might just find that it will turn round and bite you. Attempting to turn it too quickly will result in it dropping a wing quite alarmingly.

At least, that is true of the model shown in the photos. To make life a little easier for you, and make your model a little easier to fly. I've revised the plan slightly to show greater wing chord. This has the effect of providing around 15% more area, a shorter nose and effectively greater tail moment.

Don't let the shorter nose part worry you. My model needed a tailskid made from a 2-1/2 in long piece of 2mm wire and the battery mounted onto the lower fuselage sheet mid point to get it to balance correctly. You will be able to use a carbon rod skid and just use the weight of the battery to adjust balance, saving you about 2g in weight.

STARTING TO BUILD: There really is nothing too involved, or unusual, building 'Another Knight'. It is all totally traditional balsa and ply, with just the occasional bit of carbon rod added to bring things up to date a little. Apart from the laser-cut parts, most of what you need can probably be found in your scrap box. No individual piece of wood is longer than nine inches, so even if you have to buy it, the cost will be minimal. That said, let's start with something really easy.

TAIL SURFACES: Absolutely the hardest task here is laminating the fin leading edge. Slice yourself a couple of 1/32 x 1/16 strips and dump them in some water to soak. You can use three laminations if you prefer. While they become nicely soggy, cut a template from scrap (I like Depron for this), wax the edges to prevent sticking and pin it securely to the board. Remove the excess water from your pieces of strip, apply white glue (PVA) to one and glue the two pieces together. While still wet, shape them around the former and hold them in place with pieces of scrap balsa until completely dry.

Now it's just a case of assembling a few bits of strip balsa and a few laser-cut parts (assuming you use the set of parts the publisher will make available) over the plan. Allow them to dry. sand overall and round off the edges. That's it, your tail surfaces are ready to cover.

WINGS: Although a little more complicated than the tail surfaces, the wings should go together just as easily. Begin by laminating the root and tip ribs, and allowing them to dry. Cut your bass spars to length and sand enough taper to the inboard end to allow for the specified dihedral. Don't be tempted to use balsa for the spars. because the optional struts are not particularly functional. All the strength in the wing/fuselage joint is provided by the spars. Spruce is fine, but heavier.

Pin down, over the plan, the spars. leading edges and trailing edges, using a rib to get the spacing right. Now glue the ribs in place, using parts DG to set the root rib angle. All other ribs should be perfectly upright. Fit the strut plates and allow to dry. Remove from the board, trim leading and trailing edges to shape and sand overall. You now have almost half your model ready to cover.

FUSELAGE: Having eased you into the build with the easy parts, now it's time for some real building. Still nothing that should prove too difficult though. Let's face it, if you can't build and join two basic box structures, maybe model aircraft isn't thehobby you should have chosen. Stamp collecting is quite relaxing, they tell me.

So, off we go by building a rear fuselage frame over the plan. Don't fit the pushrod exits at this stage unless you're using the same gear I did, in the same position. Once your first side frame is dry, remove it from the board, turn it over and build a second frame on top of it. I say turn it over before building the second side because strip balsa. being what it is, is very seldom exactly the size it's supposed to be. Some pieces will be slightly thicker than others and. if you don't turn the first side over. those differences will only become multiplied as the second side is built. Because you had all the parts firmly pinned against the building board, you now have a perfectly flat surface upon which to build your mirror image side frame. Keep those flat surfaces inside when you join the sides with cross braces and all unevenness will be on the outside. An extremely handy place for it to be when you finish sand your completed fuselage.

As you may have gathered, the next step is to join the two side frames with cross braces. Once again, work over the plan to ensure you end up with a straight, square rear fuselage.

While that dries, assemble F1, RT and F2 over the plan (to get the angles right) and glue the assembly accurately to one fuselage side (having marked the positions of F1 and F2 onto both sides). Glue on the other fuselage side and position the assembly over the plan to ensure correct alignment. Also ensure that the assembly is blocked square while the glue dries. Assemble F3/F3A and slip a scrap piece of spar material though the spar slots to ensure accurate positioning when you glue the assembly into the fuselage. The spar stubs will glue against this former, setting the dihedral, so it needs to be fitted accurately if it is to work as intended.

Yet again working over the plan as an aid to alignment, join the front and rear fuselage box structures. Once dry: tit the 1/32 sheet and a small piece of scrap balsa to act as a tail skid mount. Don't fit the axle until later. Mock up your radio installation so that you can use the pushrods to accurately indicate where you need to position the exit plates, and tack glue in place a rough shaped nose block. Trim the longerons flush with the fuselage sides, finish shaping the nose block and sand the complete fuselage ready for covering. Remove the nose block ready for installing the motor unit.

COVERING AND FINISHING: How you cover your model is a matter of personal taste. However, whichever covering you use needs to be lightweight and not shrink too aggressively. The prototype model is covered using printed, lightweight Esaki tissue and finished with three coats of thinned dope. That meant I could add a reasonable amount of detail, without actually adding any weight to the model.

All the model was covered, with the exception of the rear fuselage bottom, water shrunk (I use waterproof inks in my printer) and the flying surfaces pinned down to prevent warping. Any areas that didn't shrink as well as I'd have liked. were given additional water shrinking until the covering was taut and wrinkle free. Then the tissue was doped.

Leaving the underside open allows easy installation of the pushrods. and can be covered once all the gear is installed and functioning as it should.

Note this plan was released into the public domain by Peter Rake, posted online at rcgroups.com/forums/showp... in September 2014. 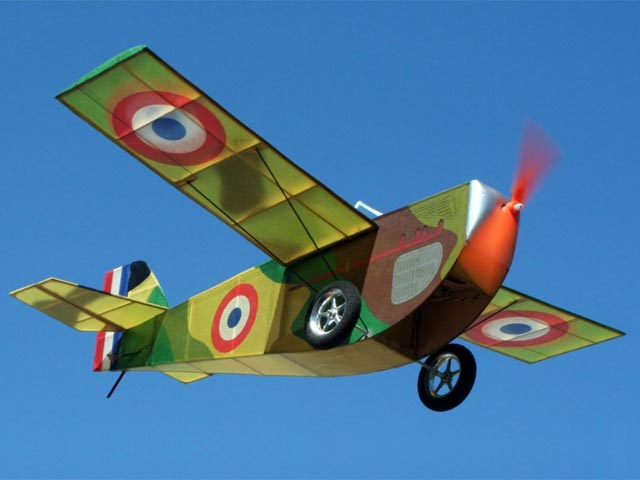