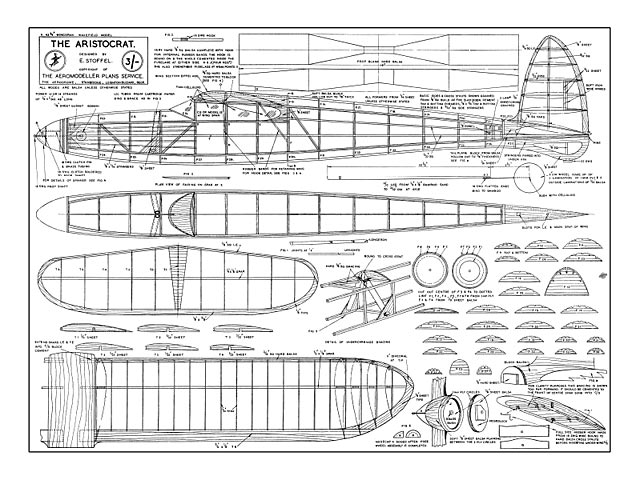 Quote: "The Aristocrat, a Wakefield design by E Stoffel.

THIS model, also featured on the cover, was designed with an eye to outstandingly attractive appearance, which has been achieved without sacrificing either performance or strength. Further more it is stronger than its fully streamlined counterpart built of formers and stringers.

The first model in this series was flown regularly for a year and ended by finally being broken up indoors and used as spares for the next version. I flew the second model in the Gutteridge Trophy Competition but only completed the model two days before the actual competition. Those of you who entered for that competition may remember that it was quite impossible to do any test flying on either the Sunday or the week preceding it. Consequently, I had to fly without a single test flight, and suffered a 'dive-in' under full power, smashing the fuselage open back to the undercarriage. This was where the model number one came in handy as it was possible to cut off the broken fuselage flush and stick on my old model's nose. The result was that I got a sufficient high placing to enter for the Wakefield Trials.

Did I hear someone say: If this model was strong how did the nose split open? In model one, I used hard balsa for the basic square of the fuselage and fairly soft wood for stringers. Owing to a small amount of sagging on the stringers, I reversed this order on model two, with the sad results as told. The building instructions give the type of wood to use and if you want your model to be able to stand the stress of a 1948 Wakefield's Trials, then don't use soft wood for a fuselage.

This model is very stable under all weather conditions and will turn in a. consistent three and a half minutes in still evening air. At the time of writing, model number one holds the Ilford Club's record with seven minutes OOS. " 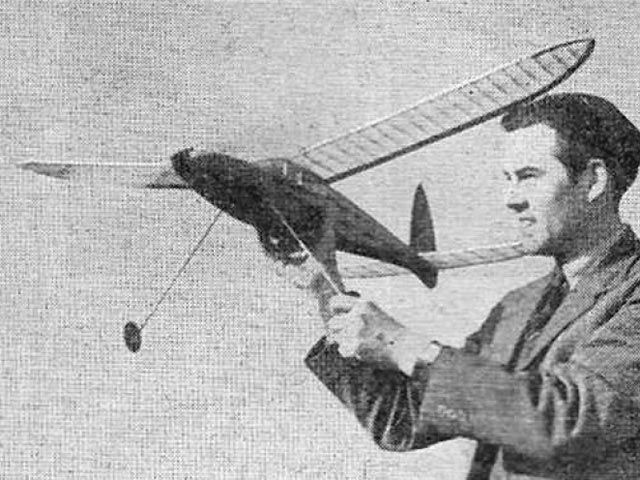