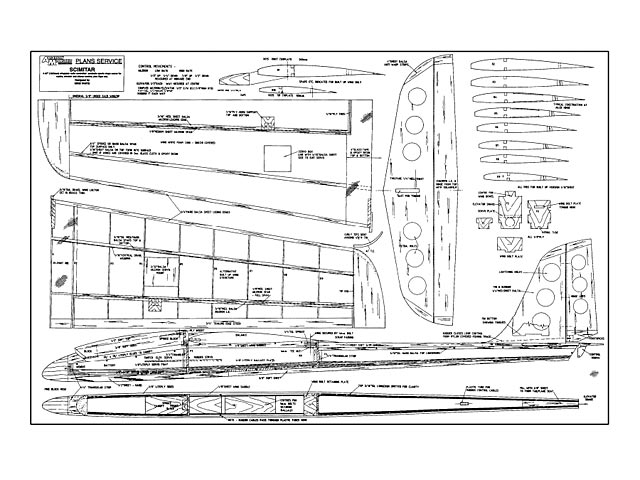 I remember a day in 1997, during our Manx Festival of Model Flight, when a goodly bunch of flyers were down at the stacks on the west side of the island. Chas Gardiner was running a pylon competition and during the event, a herring gull was chasing one of the models, flown by Duncan Simey, I believe. As the model arrived at the turn and banked sharply, the bird did the same. Trouble was the model made it and continued on its way, but the gull crumpled up, stalled and fell out of the sky several times before flying off!

On another occasion just recently, I was flying this model and was joined by a hawk of some kind, which came quite close to the model's tail. Each time I made a turn, no matter how gently, the hawk seemed to take fright and, just like the herring gull, it crumpled and fell out. I think that it was the noise of the servos operating which frightened it. After some time he seemed to get used to the model being in his piece of sky and followed it for several minutes before flying off.

Another memorable occasion was many years ago when I was living just outside Nairos, Kenya. I was flying a 100 in sailplane and, on the approach at about 100 metres out, a very large eagle hawk tagged along behind. As the model drew level with me, the bird, with a wingspan of about six feet and enormous, dropped its legs and, with huge talons fully extended, made a very slight movement with its wings and accelerated towards the model. I was mesmerised, I can tell you. as the bird was no more than 15 metres from me - I couldn't believe that it hadn't seen me. As it accelerated, I snapped out of my trance and sharply turned the plane and crash-landed into the tall grass.

It's memories like these which add greatly to the enjoyment of glider flying, of any kind, which does not seem to happen when flying powered models. I still love them, though!

SCIMITAR: Scimitar was born of a need for a model a little less frantic than my Chaka 3 (Silent Flight 1997 Dec/Jan) - something which was fully acrobatic, but which could be flown in lighter winds. I still haven't bought a computer Tx, so my Skysport is still the one I use on this model. Some down flap can be used in light winds to keep the model flying comfortably, and some 'up' may be switched in to fly it faster, or bring it down quicker.

So far, two wings have been built and tried. One with an Eppler 374 section and another with the RG15, both to the same plan-form. This gives the model a slightly different look when airborne and one which will help you to pick out your model in the gaggle! Eventually, I settled on the RG15 section, as it is quite a bit faster than the E374. Although not quite so upwardly mobile, with an aspect ratio of 6.6 and this plan-form, the model is not in the really rapid category of models. It was designed as a general intermediate sports model, with good aerobatic capability. It's still fast though!

During its embryonic stage, Scimitar has been flown in winds up to 35-40 mph, which has resulted, on four different occasions, in the need to build 4 more fuselages! This one, then.is the ultimate in strength, ease of construction, aerodynamic efficiency - and looks, wow!

Now that I have proved its flyability in the higher and colder winds, I don't have to go out in these shriekers and freeze to death, I can choose the warmer. lighter breezes. However, should you be one of the harder types and like the howling winds in which to fly, some ballast may be added. To facilitate this, a ply plate has been indicated on the plan for this purpose, just below the balance point. My system consists of two pieces of lead roof flashing, each with a slot drilled at the ends, through which the securing bolts pass. Each piece may then be moved back and forward to get the correct balance before flying. Mark them No.1 and No.2 and mark each forward end. No.1 goes on the bottom.

When the correct balance has been achieved, mark the ply plate so that the ballast is placed at the correct point each time it is installed..." 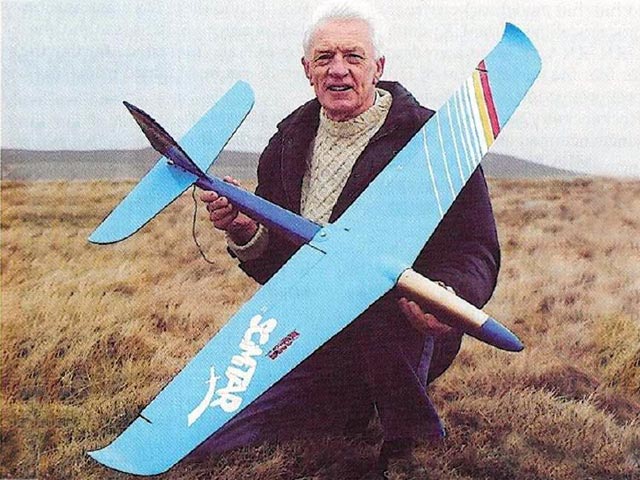