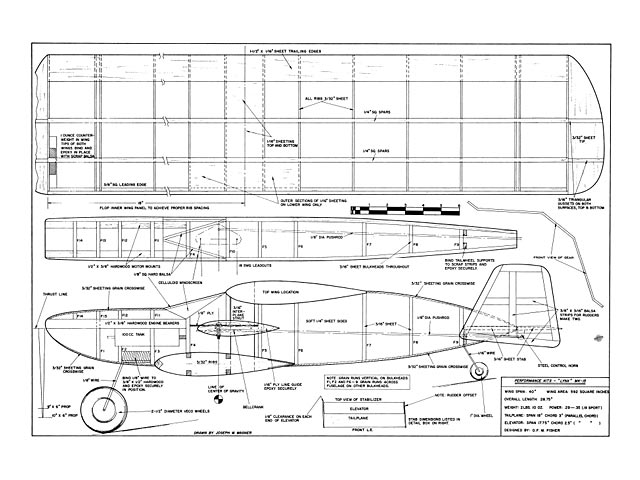 Quote: "The Lynx MK 15 biplane is the end product of steadily developing the stunt C/L biplane theme over a period of fourteen years. The negative stagger configuration was chosen as the de-signer feels that distinction and general appearance is enhanced; also there are certain structural advantages. Aerodynamically it is unimportant as negative stagger while flying upright becomes positive stagger when inverted.

Lynx bipes have been flown in open stunt competitions with considerable success and on a couple of occasions, gave a good account of themselves in the Gold Trophy at the British Nation-als. The O.S. 35-powered Lynx Mk 6 came 7th at the Nationals in 1958, and the Mk 15 placed well up the field in 1964. Original Mk 15 is powered by a Glow Chief .35. All up weight works out at 2 lbs 10 oz.

In spite of its 593 sq in of wing area, and thanks to its biplane configur-ation, the Mk 15. is compact, strong and easily transportable. It is spectacular to watch in the air and its performance is only governed by its pilot. As well as being a first class competition perform-er, it is ideal for demonstration flying, and general display work.

Construction is quick and ultra simple throughout; but the completed model is strong and, like most simple things, very effective.

Fuselage: Cut the two fuselage sides from medium soft 1/4 in balsa sheet and snape together to ensure identity. Sand paper the outer faces and mark inner ones with the bulkhead positions. Cut out rectangular 3/16 medium/soft sheet bulkheads. Assemble over the top view starting with the parallel section from F6 to the nose. Ensure that the grain in all bulkheads runs vertically on bulkheads F1 , F3 and F6-9 and runs across fuselage on the other bulkheads. This is very important. Use a set square and check alignment regularly as it is essential that this should be perfect. Draw in the tail of the fuselage and fit F9, followed by F7 and F8. The engine bearers are cemented against the inside of the fuselage sides. The engine should be mounted with 1° right side thrust built in. Smear the inside of the engine compartment with fuelproof balsa cement. The fuel tank should be of 100 cc..." 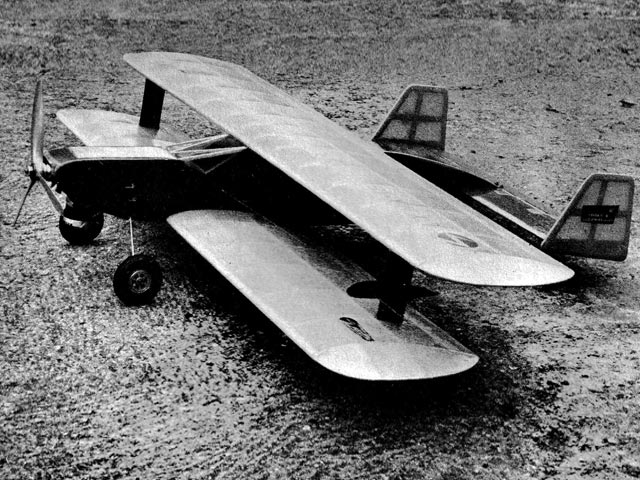