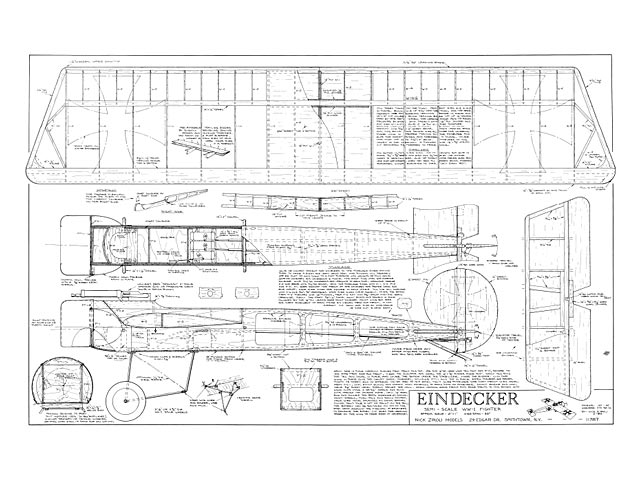 Quote: "An FM Product Review. Back in production again, this updated kit has been dubbed the 'Rhinebeck Special' by WWI Jamboree competitors. Nick Ziroli Models' Eindecker, by Bob Hunt.

It was August of 1915 when Max Immelman, noted German ace, first flew the plane which was to eventually bring him legendary status. The Fokker EIII Eindecker was one of few monoplanes to be used during WWI, but its virtues made it a deadly adversary. Developed from an early reconnaissance type, larger engines and greater wingspan plus other refinements led to one of the first 'predatory' fighters, intended primarily as a destroyer of enemy aircraft.

As the date of the annual Rhinebeck WWI Jamboree neared, I began to look for a suitable craft to fly in the maneuvers, mission and combat events. Everyone I asked recommended the Ziroli Fokker Eindecker (oz6685). I was later to find that this plane was dubbed by Jamboree competitors as 'the Rhinebeck Special'.

The design first appeared in the March 1968 issue of Flying Models and was an instant success if plans sales records are any indication. Nick went on to produce the first kit version of the Eindecker under the name of Major Models. Nick's modeling business boomed in other areas as well and Major Models eventually fell by the wayside to make time for these other interests.

Through all of this, another Ziroli was growing up in the hobby and becoming an accomplished modeler in his own right. Nick Ziroli Jr turned many heads at the 1982 WRAM show with his outstanding rendition of his Dad's AT-6 Texan design. Nick Jr, it was learned, had started the kit business again, and among the products offered was a re-designed version of the ever popular Eindecker. The new three channel plane features many refinements and much prefabrication that the first kit lacked. A larger wing with spruce spars, a larger fin and rudder, vacuum formed plastic cowling pieces and one piece poplar ply fuselage sides were among the improvements to the earlier kit.

Openers: The new Eindecker kit is a joy to build. Excellent die-cutting of both balsa and plywood leaves the modeler with clean non-crushed parts. The fuselage doublers are designed in such a manner as to incorporate the proper amount of down and right thrust automatically. Little or no trimming of parts was necessary throughout construction.

Wing: The wing is a semi -symmetrical type, with 1/4 x 1/2 inch spruce spars running along the high point of the airfoil on both the top. and bottom of the wing. The trailing edge is made up from two pieces of 1/8 sheet balsa glued together at the rear. The ribs slip into this trailing edge assembly. A piece of 7/16 square balsa is glued into notches at the front of the ribs to form a leading edge. These pieces were of the firm variety to handle any less than perfect landings. The center section is reinforced by two 1/8 plywood dihedral braces on either side of the spruce spars, and is then sheeted with 1/8 balsa making for a very solid unit indeed..." 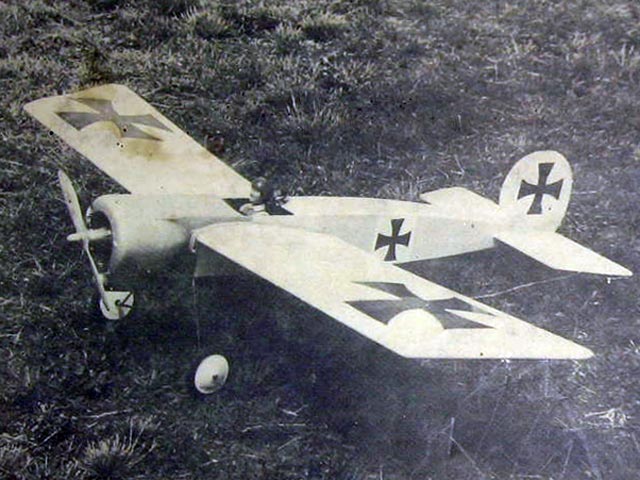