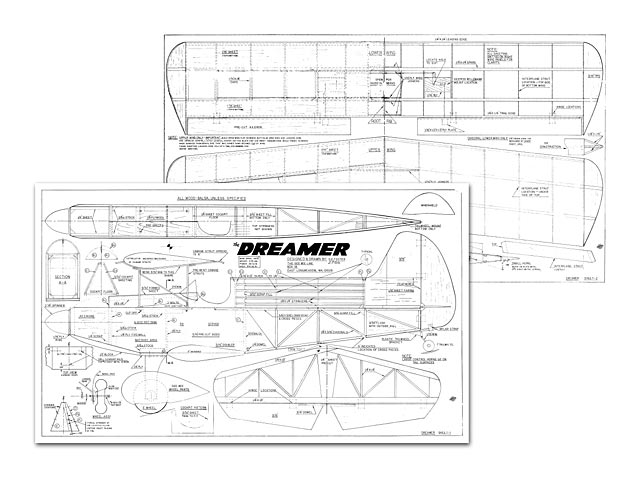 Quote: "This distinctive bipe has a swept top wing and dihedraled bottom wing. The kit includes all special hardware, prebent cabane struts, wheel pants with exclusive 'Pant-lok' and nachine but parts. An aoutstrnding high-performance sport bipe. 38-1/2 in span, for .40 - 45 power, and 4 channels."

Note the Dreamer design was also published in Flying Models June 1972, see Dreamer (oz8161) listing, although the two plans do have some differences such as shape of rudder outline, also built-up vs sheet horizontal stab.

This has gotta be the cutest little airplane ever! With all the jaunty good looks of a homebuilt sport biplane, the Dreamer was designed by Don Foster, and first appeared as a construc-tion article in the June 1972 issue of FLYING MODELS (you can still get Plan CF-266). It was then - and still is - kitted by Don's company, Gee Bee. So, obviously, this is not a 'new product' review, but rather a re-view of a model that's still going strong after 20 years.

In a way, this design from the past may be just what we need today. In recent years our airplanes have been getting bigger and our cars are getting smaller. Part of the cost of getting into giant scale these days is the price of a new minivan! The Dreamer, however, will fit, fully assembled, under the hatch of my 300Z-X, or in the trunk of the average compact car. With a wingspan of 38-1/2 inches, and an overall length of 36 inches, this is a small airplane.

The kit varies somewhat from the original construction article. Most noticeable is the fuselage structure, which on the original has 3/32-inch sheet balsa sides from nose to tail, with doublers in the front end. The kit uses 3/16 sheet balsa sides from nose to wing trailing edge, then 3/16 square strip open structure back to the tail. The original's horizontal stabilizer is solid 3/18 sheet, whereas the kit has a built-up stab. Depending on wood selections these differences would probably amount to no more than a couple of ounces between airplanes. Yet the weight of the original was a whopping 5-3/4 pounds, while the kit calls for a weight of 4-1/2 pounds, and mine came in at 4-1/4, a difference of a pound and a half compared to the original, or a weight reduction of 26%! Granted, the lighter construction of the kit is all behind the CG, and maybe the original needed lots of noseweight for balance.

I do know that my kit-built Dreamer actually came out nose heavy, even with a light OS .40FP plain-bearing engine up front, and I had to locate the Rx battery at the aft end of the radio compartment for proper balance. I must also say, as an unreconstructed freeflighter, that I was delighted (de-light-ed, get it?) with the extremely lightweight wood in the kit, which no doubt contributed to the less-than-specified finished weight of my airplane.

The quality of the kit is very nice: the many pre-cut pieces are smoothly finished, and all are sawn and sanded. There is no die-cut (or die-crushed) wood in this kit. The pieces are not marked or otherwise identified, and it's kin da fun to figure out which pieces go where. The hardware package is quite complete, and the pre-bent aluminum landing gear and Gee Bee molded plastic wheelpants are excellent. The wire cabane struts are pre-bent also, but the upper wing saddle wire pieces are not.

On the nit-picking side of things, there are a few oddities in this kit. The pre-cut elevators are smaller than shown on the plan; they're certainly adequate as is, or you can enlarge them if you like. The beautifully pre-cut wing ribs don't match the airfoil drawn on the plans; don't worry about it, just trace an actual rib onto the plan for later reference when bending the cabane wing saddle wire. The centerline drawn on the fuselage top view is about 1/16 inch off-center; if you use it to align the fuselage when gluing the sides together at the tail, the fuselage will be crooked. The rib spacing on the wings doesn't match side-to-side, but it's not critical. Lastly, my kit was missing the 3/32 sheet for planking the upper fuselage, and was short on 1/16 wing planking. A trip to my scrap box solved that.

So how is it to build? Assuming you have some experience - and this is definitely not intended to be a beginner's airplane - the assembly is, as they say in too many construction articles and kit reviews, 'straight-forward.' You begin with the top wing, which has an interesting design gimmick. First of all, the airfoil, which is symmetrical, has a normal curve from leading edge to main spar, but is then a straight line from spar to trailing edge. (This is the kit wing airfoil. The original design had a more conventional airfoil.) When you build the wing, you place all the ribs with this straight portion flat against the bench surface..." 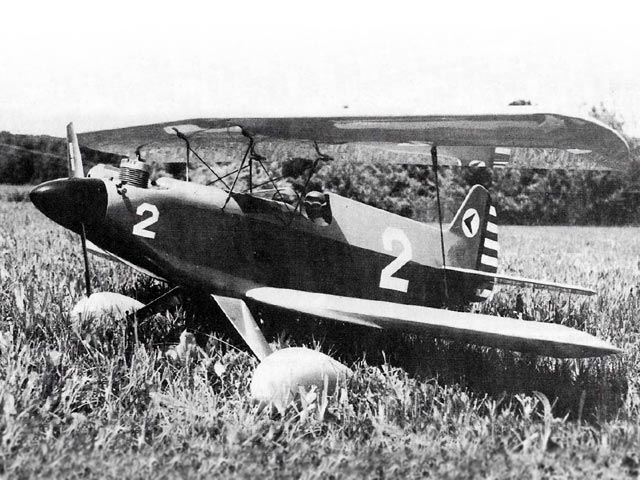 The plans for this Dreamer say “GB Line”. Could that be who made the kit?
Beazld - 12/01/2019
Just some info, this was kitted by Gee Bee, who also made the Mallard, Islander, Sea Hawk and a Tiger Moth. I built and flew the Sea Hawk. The amphibous planes used their blow moulded pontoons.
anon - 13/01/2019
Excellent, thanks. Have changed this listing now, to say from Gee Bee.
SteveWMD - 13/01/2019
Please accept these photos of the Gee Bee Dreamer biplane I built about 15 years ago or so from a GEE BEE line kit [more pics 004-007]. It, by far, was (the wings and the back half of the fuselage still is) my favorite airplane. It was powered by an Enya .40 TV from the early '80s. Covering was silk and dope. Originally it had an inverted PAW .40 in it but that was swapped to the Enya. After a major wreck, the nose was repaired to accept the Enya in a side mounted fashion and a cowl was built of balsa. You may notice the shock absorbing landing gear utilizing car shocks. Its demise occurred shortly after I replaced the Enya .40 with a first generation Fox .45 schnuerle engine with a reverse running crank. Gobs more power and reverse torque and "P" factor. I knew it would be short lived with that combo. I'll repair it some day! (It actually landed slower with the skis than the wheels which contributed to a few "dropped in" landings each spring!) The photos were taken by Dan Clune.
DougWeaver_Buffalo_NY - 21/01/2019
Where can I get a cowl like the one in the yellow and red picture?
ronco - 11/05/2019
I just completed a GeeBee Dreamer build that turned out very well - looks good and flys great too. Thought you could use a few pictures for the plan page [model photo & more pics 008-010]. My build thread of the project is here if you're curious. https://forum.flitetest.com/index.php?threads/gee-bee-dreamer-bipe.57753/ Thanks!
Rockyboy - 11/06/2019
To ronco, You can get a cowl like the one in the yellow and red picture just the way I did - by building from balsa and plywood then covering it with silk. I made a bulkhead the shape I wanted at the firewall from 1/8" ply with cut outs to clear the engine and for cooling air flow etc. It's more of a bulkhead outline than a bulkhead. Another bulkhead was made the shape of the back of the nose bowl then another balsa one the shape of the very nose of the cowl. 3/16" sq notches were located in the center line top and bottom and on the wide point each side and maybe a few other locations where I thought they were necessary. 3/16" sq stringers or keel pieces were places in the notches and used to align the three pieces together with the firewall end flat on the bench (I might have done the main section first then the front section). The gaps were planked with either 1/8" or 3/32" by a quarter inch or so balsa planking. Then it was sanded to shape filled with dope and talc then sealed and covered with one or two pieces of silk and painted with orange dope.
Doug Weaver - 11/06/2019
Add a comment