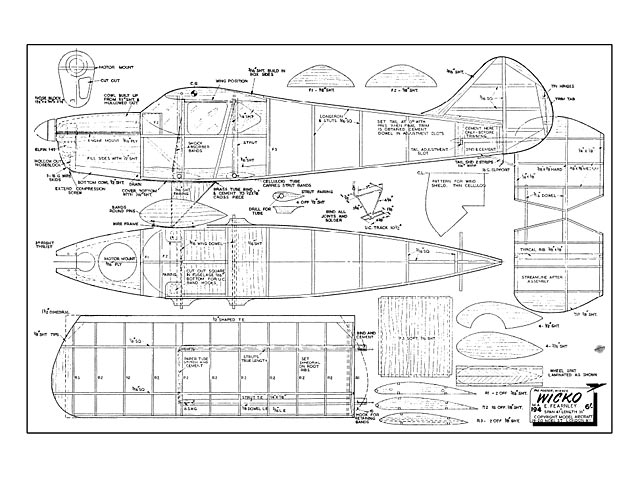 THE standard Wicko is a two-seater powered by a Gypsy-Major 130 hp engine. It was designed in 1936 by an Australian, Mr GN Wikner. Apart from civil duties some of these were in service for communications with the RAF. A modified version, in which an extra seat was fitted sideways at the rear of the cabin, and the flaps removed to reduce weight, being probably unnecessary on laid out service runways anyway, was labelled the Warferry. The only external difference appears to be a tail wheel on the latter. The prototype makes a perfect flying scale model, being simple in general outline, yet possessing nice lines and a character all of its own, and rugged enough to stand up to hard use. It is in fact an ideal 'sport' flier being just as reliable, with the added attraction of being true to scale in every way.

The fuselage box is almost too simple. Note the sheet wing roots built in the sides on the plan. Join the two sides together with F3, cut out of light sheet adding all the spacers top and bottom. F1 and 2 are added, and sheeting is completed. Cut the motor mount out of 3/16 plywood to fit the motor you are using. The original has flown with an Elfin 1.49 and a Bee 1 cc. With the latter it will be necessary to keep the weight down as far as possible, while the bigger motor will allow heavier wood to be selected, and a full dope trim added. The bottom of the nose is cut from 1/2 in sheet, as are the sides. Assemble these parts, being very sure that the motor mount is exactly in the right thrust line, to make trimming easier later. Add the nose block and top cowl, hollowed out for lightness. Finish by carving to rough streamline shape, and finish with coarse and fine sandpaper. Give two coats of wood filler inside and out. Fuel proof inside well, leaving room to drain at rear. Add the celluloid windows after the wing dowels, and hooks for the undercarriage have been fitted, and the inside of the fuselage cabin painted a neutral colour. Bind the U/C brass tube to the cross member. Tail skid (or wheel) and tubes for wing struts follow, with the fairings added. Sandpaper wrapped round a pencil will streamline these for you.

Tail is very easy. The strip wood is assembled on the plan, and when removed, streamlined with a knife and sandpaper. Drill for the front dowel, but do not fit until it is fitted to the fuselage. Our model finished up with very little negative incidence on the tail, but start with zero. The tail is cemented at the stern post only until trimmed, when the front dowel can be cemented to avoid accidents. Pin the tail at the setting for testing. Rudder is all strip wood with sheet outline. The trim tab is optional but useful on the flying field.

Wings follow usual style. Ribs are medium stock with fairly hard spars top and bottom. Take care to keep them true though. The undercarriage looks complicated, but is easy to make. The wire is formed as shown, and the spats are held in place with bands, as it is not satisfactory to have these cemented to stand the rigours of the flying ground. Be warned to solder really well, with 15 A fuse wire bound round first. Fair the legs with sheet as shown, and complete the spats as per plan. The wing struts are dowel and trailing edge cemented together, with wire hooks to fit the tubes and a 'U' fitting at the top passing through paper tubing, fixed to the wings. When all is covered and doped, test for trueness. Steam out warps now before the damage is done.

As the model has a close coupled tail, the balance should be done carefully, though it is not a critical model to fly at all. Our model needs just a little tail weight. If the wings, tail, and thrust is as per plan, it should fly first time. Keep the motor revs down at first, and avoid a tight turn, particularly to the right.

Our model proved a very sure flying job, and is very impressive in the air. A Frog 8 x5 prop was found best for the Elfin. Don't use a small diameter prop, or you will set up a great torque factor. Although downthrust was fitted for testing, it was soon removed, and the model has never shown any sign of power stall, even with a small negative on the tail. In fact, it is one of the easiest models to test we have built, showing no bad habits to date. " 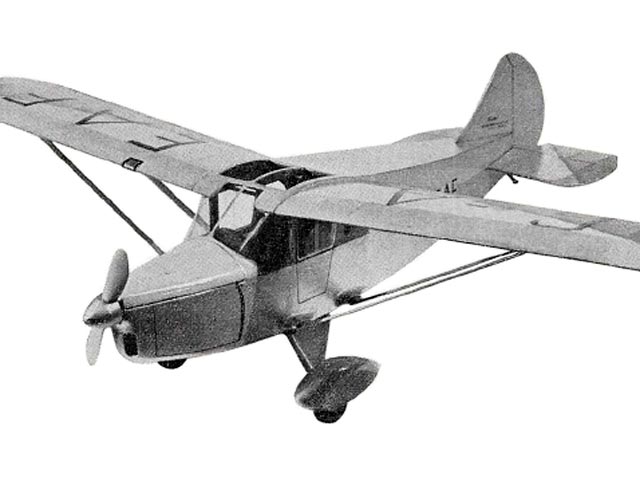