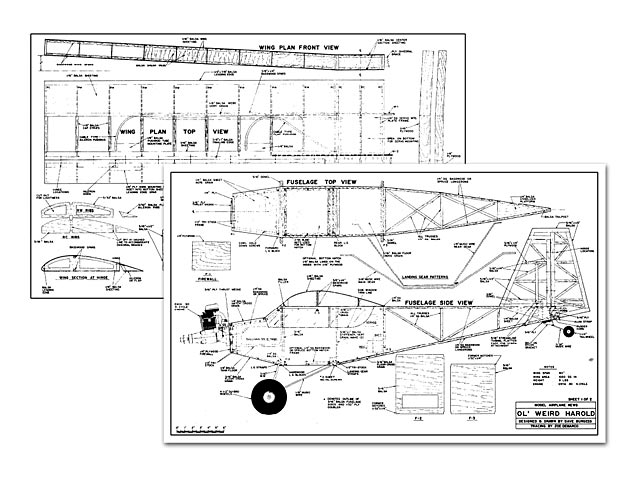 OL' WEIRD HAROLD is the third in a series of ugly airplanes that were designed for no good reason, but which have proven to be super performers. They are capable of doing so many things that they are enor-mously successful in my local flying area, so I decided to share "Harry" with all of you who like ugly designs that are just plain fun.

Harry was born out of the necessity for me to have somewhere to store and dis-play my brand-new Enya .90 four-cycle from Altech Market-ing*. Since I also like to run my engines, I decided the best place to hang the thing would be on the front of an aircraft of some type. Then too, since the Enya is such a beautiful piece of work, I figured I would need something totally ugly to set it off to its best advantage. There are several copies kicking around of an earlier, smaller Harold, most of them powered by .60-size four-strokes, so I decided to enlarge the basic idea a little for the .90. The result is the subject of this article.

When I built Harry, I wanted to try some aerial photography, so I set him up so I could mount a camera inside the fuselage. The camera peeks out under the left wing through a plexiglass window, a setup that has worked out very well considering it was my first attempt. I used a Canon AF35M Sure Shot camera, which features auto-focus, auto-wind, and auto-exposure.

Harry was designed to have a large payload area and, if desired, a removable bottom hatch for mounting whatever, or for access to the payload area. His wing is one piece, held on with rubber bands, so that damage would be minimal in the event of a controlled crash. The large wheels are a must for flying out of cow pastures and swamps. The flaps are not necessary, but add versatility as they make for steep, slow approaches to landings.

Harry looks ungainly (an understatement?), but don't let his looks fool you. With the .90 for power, swinging a 15 x 5 prop, and at a weight of 9 pounds (minus camera), he'll perform feats that will amaze and entertain you. He'll take off in his own length, sustain a 60° climb forever (or out of sight, whichever comes first), do 30-foot-diameter loops at 1/4-throttle, do sustained inverted flight, snap rolls, spins (with power on), axial rolls, neat stall turns and tail slides, plus a variety of other maneuvers that remain, so far, unnamed and unexplainable.

Best of all his characteristics are his payload-carrying ability and his docile flying habits, which make him a terrific trainer. He'll fly all day long, with flaps up or down, at speeds of under 20 miles per hour, and he's big enough for even a rank beginner to see at long distances. His wing loading is in the 17 to 18 ounce per square foot range, so he'll penetrate the wind quite well, but still float like a feather.

I fly him with coupled ailerons and rudder (I use an Ace* Silver Seven with the expo/ mixer option) for better roll and turn response, but with the controls uncoupled, he'll do neat slips. Slow flight around our club field at 15 mph and 10 feet altitude is the norm on calm evenings, or sometimes I stand on the far side of the runway and fly him around myself like a U-control model. I make a lot of flights, from taxi-out to landing, sitting in my lawn chair, and if 1 have to swat at gnats, I just set the transmitter down for a while and Harry putt-putts along all by himself. In fact, I daresay he even makes me look like I know what I'm doing!

As you may have gathered, I'm just wild about Harry (pun intended). As a trainer, I feel he's unexcelled. I've shown him to total strangers to R/C and in less than 5 minutes they are flying him well enough for me to step away. With full flaps and low throttle, he just can't get up enough speed to get into much trouble. If he does get ahead of the student, he'll almost stop and wait till they catch up!

CONSTRUCTION. Harry's construction is very simple and square - nothing gets rounded except the wheels. For this reason, he builds very fast. Don't even try to fancy him up, he's too ugly to take to it well. Your best bet is to make a kit of parts before starting construction, so you will recognize the various pieces when you need them. There aren't that many anyway.

Start the fuselage by building a left and a right side over the plans, making sure that the 3/8 balsa sides are flush with the outside surface of the longerons. Add the 1/32 ply doublers..." 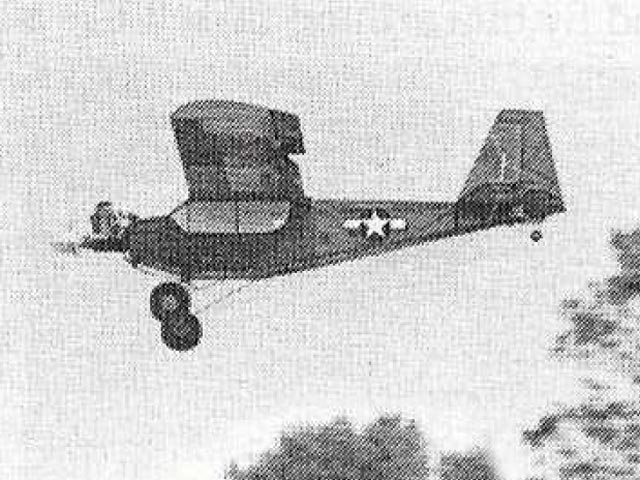