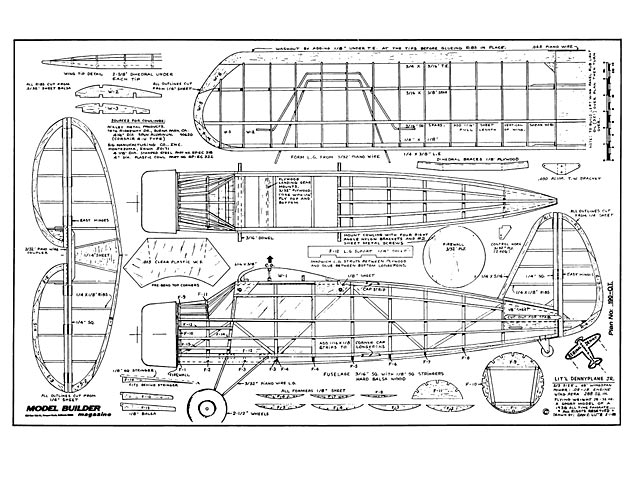 For all those modelers who lived and grew up in the Southern California area during the late nineteen thirties, Reginald Denny's hobby shop was their headquarters for model supplies. This famous shop was located on Hollywood Blvd. just east of the movie theaters and nightclubs. The woodfra me building was an old converted house with large display windows that were full of built-up models. There was even a very large scale model of a four engine China Clipper that was used in the movie of the same name. If you looked at it close, you could see the eyelets in the leading and trailing edges of the wing which were used to guide it across the movie screen on wires.

Adjacent to the hobby shop was a large work area that had many models in various stages of construction hanging from the ceiling and walls. Most of them were Dennyplanes. This hobby shop was just part of Reginald Denny Industries. They manufactured and distributed everything from engines, kits, and airwheels to a complete line of model racecars and accessories.

All of this was owned by the flamboyant movie star, Reginald Denny. He appeared in many of the motion pictures filmed in the '30s and '40s. He was quite debonair and appeared with many famous actresses of the same era. He was noted for giving complete and fully tested Dennyplane model airplanes to some of the young and up-coming child movie stars.

Freddy Bartholomew received just such a model for a Christmas present. He showed up with it at the Pacific Coast Championships in the summer of 1937. This eleven year old MGM movie star had high hopes of winning until an over-enthusiastic photographer stepped into the path of his model as it was taking off. The wing and nose section were badly damaged and beyond repair.

There were also photos of Jane Withers holding beautifully built Dennyplanes that appeared in the movie 'Holy Terror.' Jackie Cooper was another young star who received one of the six-foot models as a gift from Reginald Denny.

As the years passed, so did the Denny name. By the mid-1950s, the only thing left of Denny Industries was a few leftover Dennymite engines that were sold at discount prices. The Reginald Denny name also disappeared from the marquee at the local movie theaters. The once-famous Reginald Denny retired and moved to England where he passed away in the 1960s without much fanfare from Hollywood.

Occasionally you can still see him in some of the old movies featured on the late night TV shows. The brilliant acting and gracious smile of this noble Englishman will always be remembered, along with his famous Dennyplane models.

There were two or maybe three different Dennyplane designs. They all had six-foot wingspans and radial cowls. I chose the later model with the one-piece wing, which was the more popular model. The construction follows the original except for the full depth main spar. Dennyplanes were noted for folding their wings in a loop. The original models used solid sheet tail surfaces which I also changed to conventional built-up construction to save weight in the tail section.

My model is two-thirds size, which builds fairly fast. The basic box fuselage with bulkheads and stringers shouldn't present any construc-tion problems to the average modeler. The lower longerons tuck in a little narrower at the firewall. This will give the engine installation a small amount of needed down-thrust. The wing and tail group just about fall together once you get all the parts cut out.

In keeping with the tradition of the original Dennyplanes, I covered mine with white silk and clear Butyrate Dope. A few drops of Tri-Cresyl Phosphate (TCP) to your dope will help prevent warps in the flying surfaces. Dave Brown Products markets a fine plasticizer called Flex-All which also works well in Butyrate Dope. The Denny emblems on the rudder are from an original set of kit decals that I found while doing the research for my model. I listed the sources for the radial cowls on the plans. Any one of them will fit with very little alteration.

I did not show an engine installation on the plans. My orginal model has an OS 10 engine and a mini airborne R/C system in it. If kept light, one of the new Cox .074 Queen Bee engines or even electric power would make an ideal powerplant for sport flying. The generous amount of wing area and the wide spread landing gear makes it a pleasure to fly, even for the novice.

When I show up at the local flying fields with my Lit'l Dennyplane Jr, most of the guided sphere kit builders ask, What's that?! A few take one look at it and start off with, 'I remember back when...' Oh well, you know the rest of the story once you get a couple of old timers talking about the good old days.

I wish to thank two very good friends, Bill Ladner and Frank Estrada, for their assistance in researching the Dennyplane models and the loan of their very old photographs." 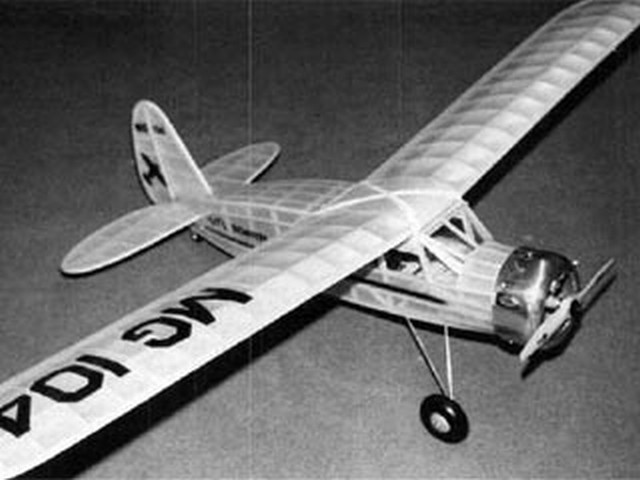 I built this many years ago, and had a ball with it. I wore out three engines in this model and it continued to fly beautifully, albeit oil soaked and coming apart.
rocketpilot - 07/05/2021
Add a comment