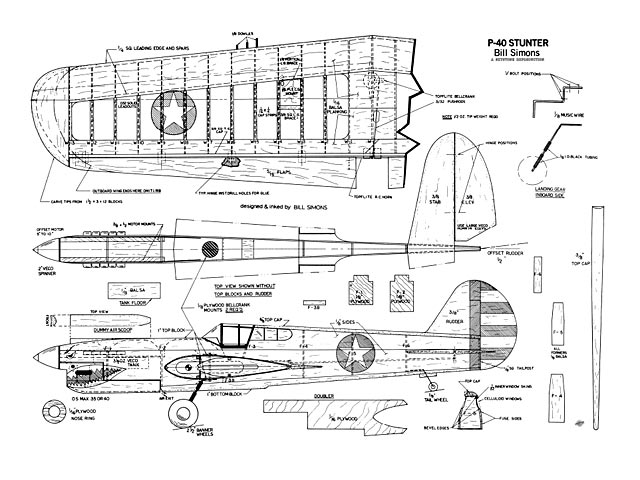 Quote: "A Stunter with a P-40 flavor! Bill's Stunt Controline P-40 is hardly a 'Warhawk,' but it's a competitive beast. For OS 35, either foam cores or built-up wings.

Most articles of semi-scale Stunt ships start with a brief rundown of the prototype. Here I will not follow suit. When compared to a real P-40 Warhawk mine bears little resemblance. What I wanted was a military-type look-alike aircraft, easily recognizable by a Navy judge.

Here's the method I use in building a foam wing. I would suggest that you order a core and plank it yourself, the reason being personal choice of wood, and one can sand the core ridding it of ridges caused by the hot wire. Also let's not forget the tender loving care that goes along with your magnificent building methods.

I will briefly outline methods and products which are needed to construct these wings. Although different methods are used, these wings are easier in the long run. The only glues to be used should be white glues such as Elmers' white glue, Franklin glue and similar alphetic resins. These glues are made from dairy products and will not dissolve the foam.

I've tried two kinds of contact spray glues. First and best is 3M #8074 Upholstery Glue, the kind used for attaching interior door panels in automobiles. It's available at auto paint supply stores. The other to be recommended is called simply Scotch Grip.

Method as follows: sand core to your liking. Clean all residue with air pressure. Glue on leading and trailing edge caps and blend to airfoil. These can be held in place with masking tape approximately 1 in apart until the glue sets. Do not use an excessive amount of glue because when dry the glue is much harder to sand than the balsa and foam, leaving a glue ridge that will be difficult to sand. In short, it will drive you bananas.

Again clean with air pressure stream. Spray "wing skins" and corresponding side of core getting a light, even coat of adhesive on both. As with the white glue, excessive amounts of adhesive will be harmful.

Let both sides set until they feel very sticky. At this point the core and skin are ready. Apply an even light coat of white glue on the leading edge cap and trailing edge cap. Turn skin so the sticky side is up. Lay skin on flat surface. Carefully position core on skin. The grain of the wood should parallel the leading edge. Rock wing back and forth and the two parts should adhere immediately. Only one chance here, so if you blow it at this point you start all over.

After this is done, turn wing over and rub skins profusely to get a positive bond. Trim extra wood around edges leaving 1/4" overlap and again tape in place. Place core in saddles (part from which wing was cut) and position a piece of hard wood which completely covers the saddle. This will distribute the weight. Put approximately 50 lb on top of this mess, distributed as evenly as possible and let it set overnight. When done, repeat the process. (Take note - not one pin is needed during the construction of wing.) After this, finish in a conventional manner.

My suggestion would be to use Sig Lite Coat Clear. It is a low shrink dope. Other brands, I've noticed, allow the seams to buckle, leaving an unsightly ridge caused by the shrinking features of the dope. This is useful when covering an open structure, but not desirable on a foam wing.

Sig Dope is a high-quality finish, so if you are using something else don't be afraid to give it a try. (Proof being Bob Lampoine's 2nd place in the Testors Best Finish category at the Nats, using Sig Dope.)

These foam wings are easily obtainable at C/L Specialties, 3 Rodger Court, Woodcliff Lake, New Jersey, Bob Hunt, President. Bob himself is a Stunt flier, so he knows what one would want. He has many popular wings available and also will custom cut wings for you.

As far as weight goes - the lightest one to date around here is Gene Schaeffer's ship called 'The Stunt Machine.' Gene's ship weighed 46 oz and flew quite well at that weight. The P-40 weighs 48-1/2 oz and had a larger wing, but a comparable wing loading and also flew well. If you live in a higher elevation area of the country, maximum weight should run 44 oz. This weight will prove difficult to attain, so a built-up version is shown on the plans.

The original version did not have an asymmetrical planform, one wing longer than the other. A mistake! This feature should be built into every stunt ship, bar none. The idea of equal panels sounded good to me during the building stage but proved to be a mistake. The only way to correct this was to add another full ounce of wing tip weight. The tip had 3/4 of an ounce to start with and finally ended up with 1-3/4 oz. Extra weight we need like stress cracks, so the plans incorporate unequal panels. I feel that this is a rule we should always follow and 1 inch seems to be the correct amount. Also I feel that some sort of an adjustable tip weight method would be a good idea and I plan to use this on my next ship. To have a more versatile design should prove advantageous.

Adjustable leadouts are also a worthwhile feature, as well as a removable tank. At Glenview NAS one of my tank vents broke. It was cause for little concern to me because of the removable tank. I would hate to think of what I would have to do to my ship had I not had this feature.

The P-40 was set up for an OS Max 35-S. I had previously been using something else and was quite happy with it. Had it not been for the changes in FAI requiring a muffler I would not have happened on this little jewel of a motor. The Max people make a muffler especially for their motors. It fits like a glove and works well. Some power loss is experienced, but this can be minimized by experimenting with props sizes and makes. The muffler comes with two removable rings which will further lower the noise level, but as expected, the more efficient the muffler, the greater the power loss. Removing one or both rings enables one to fit the power range of the Max to the airplane. Again, another example of versatility.

When coupled with a Uniflow tank system, which has been around as long as the Ford, this will give a smooth run from start to finish. Addition of the muffler will make the Max run even smoother, it seems. The backpressure helps a bit. Also, not incidentally, it helps calm the nerves of your local neighbors.

Also consider the noseweight factor. Very few of today's ships balance when they should. Most are tail heavy. Here's a dandy way to trim your ship: the muffler weighs 1.5 ounces and can be altered to weigh 1 oz. The weight of the Max 35S is 6.5 ounces, which is right on par with most other .35 engines, so this will not cause any difficulties. The OS runs better when vibration is held to a minimum, as do all motors. Always use a balanced prop! Also, make sure that the wheels don't vibrate.

Construction: Assuming that we have in our possession the lightest balsa available, we shall start with the wing. If you decide to use a foam wing, then this part of the instructions won't apply. The following is intended for a built-up wing.

First, obtain two lengths of 3/8 in OD aluminum or steel rods approximately 54 in long. These rods are intended to assure the building of a straight, true wing. They are the simplest method to form a jig that I know. The main bulk of construction can be accomplished using this jig. All planking capstripping, etc. can be done with the rods inserted.

Let's start. Make templates from plans of root rib and tip rib. 1/16 plywood or 1/16 aluminum should suffice. Stack 14 pieces of 1/16 between templates and then bolt fast. Carve and sand to shape, then repeat the process. Take note that the inboard wing is 2 inch longer as per plans. This is accomplished by omitting two ribs from the outboard panel. Slide all ribs on rods. Block up both ends of rods so that you have a 'floating' assembly. Mark rib positions on the leading and trailing edges and spars. Find the positions from plans. Pin ribs in place and glue. Add hinge blocks as noted. Proceed to add leading and trailing edge planking and center sheeting.

Take note that the method of installing the bellcrank differs from most. This method which I call a 'floating bellcrank' is stronger and far superior to the usual method, so do yourself a favor and use it! When mounted in this manner the plywood is held fast. not only by 1/16 sheet center planking but it is also butted against the 1/16 plywood fuselage doublers..." 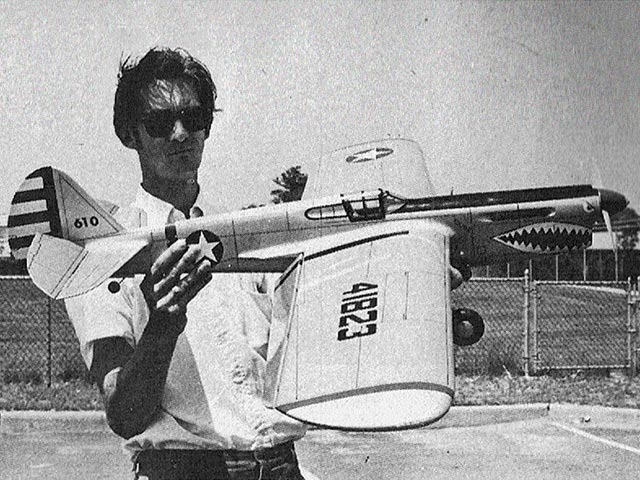