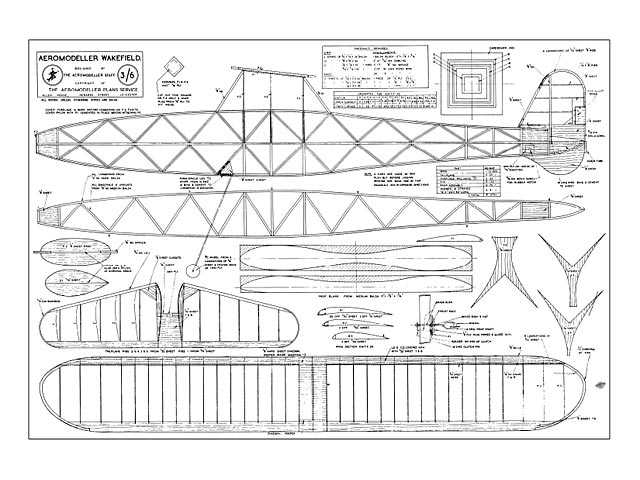 Quote: "THE Editorial ears passed in and out the 1947 rumours of the return of the Wakefield, but they genuinely pricked up at the first intimation of a definite decision. There was a stir and a bustle and tight-lipped staff members were seen carrying large rolls of paper or waving pencils and compasses with the air of men with secrets. On paper our motley modellers produced a motley of models - until it dawned that time was short and the best solution was the pooling of ideas. So pooled they were - and after the inevitable series of arguments a somewhat unusual hybrid was evolved. It was decided, perhaps a little late, that it should be functional rather than classical, and as the plan and photos show, this is undoubtedly the case.

The designing was made more interesting by the fact that only one staff member was an all-time rubber enthusiast ; all the others being ardent power fiends of duration, flying scale, or control-line tendencies I However, it was found that in some ways this had a good effect rather than otherwise, as right from the start there was nothing stereotyped about the Aeromodeller Wakefield other than the necessary Wakefield formula.

Stability and performance were the two goals and a start was made after much controversy from an entirely new direc-tion, influenced undoubtedly by the power experience of those concerned Thus, there was evolved an undoubtedly new type fuselage. Most noticeable was the incorporation of a high pylon almost half way back along the very long fuselage. This was designed to allow the use of maximum power without stalling (due to the long nose and consequential long thrust moment of the motor), to place the CG of the rubber at the CG of the whole machine in case of accidents, to allow the maximum length of rubber for the all-important motor run consideration, to put the CLA in the best possible relation to the CG and to ensure the greatest possible stability in both climb and glide. All of which, to the gratifi-cation of the people concerned, it did The undercarriage is from the flying point of view quite unnecessary, as the model will scream off the deck lightweight fashion and even when an orthodox launch is adopted there is practically no take-off run at all.

The wing is very light but strong, and the section was decided after several wings of different sections had been built and tried. NACA 6712, Eiffel 400, Davis, SI series, were all tried, and it became obvious that the best performance was undoubtedly being put up by the turbulent, or laminar-turbulent flow type of section. Further experiment evolved the section shown on the plan, which is most satisfactory. It will be noted that the incidence setting seems remarkably high. To explain this we would mention that the average model with its 4 degrees or so of incidence almost invariably adopts a much greater angle (according to section) when in flight with a resultant increase in drag. Whereas the 'Aeromodeller Wakefield,' by virtue of its long nose moment counteracting any tendency to stall under full power, and the pylon mounting of the wing, flies at its designed attitude with the minimum of drag. Six degrees of incidence are shown on the plan but it is possible to increase this according to model and weather conditions to as much as 10 degrees with even more beneficial results. It is a well-known fact that a wing is more efficient at higher settings, and this accounts to some measure for its pleasing performance.

The tail is orthodox, and the fin also except for a small trim tab. Note the small size of the fin - another result of using a pylon learnt the hard way from power duration models. The lessening of interest in rubber models with the advent of the diesel is I suppose the reason that nobody seems to have thought that the benefits of high pylons might be attached to their use in rubber jobs. However, our power enthusiasts here thought of it straight away, and also as the most useful and efficient way of cutting down the drag whilst retaining the Wakefield cross-sectional area.

A single-bladed folder, a double-bladed rectangular folder, and an orthodox double-bladed free-wheeler, were all airscrew combinations that were tried. Most of the preliminary testing was carried out with the single folder, but the most successful performance to date was with the free-wheeling airscrew, and we are inclined to agree with Bob Copland in this respect.

Construction of most of the components is rather original, the fuselage in particular being of unusual design. With the amount of rubber we intended to use and the small cross sectional area, except at the pylon, absolute rigidity of the fuselage structure under full turns was imperative. This was obtained by the use of only the hardest balsa, with cross members diagonalised on a semi-Warren girder principle. In addition the fuselage was covered and doped before the pylon was built on, which again contributed a fair proportion of extra strength.

The wing is built in one piece for greater strength, full rigidity being obtained by dihedral braces and a large solid trailing edge spar and a hollow box leading edge built up with sheet on a 1/8 sq false leading edge. Tips are laminated 1/32 in sheet, extremely strong but light. Although the wings will flex fairly easily in their uncovered state, by sticking the covering to each rib top and bottom and doping, the whole becomes absolutely rigid. The original has been flown in all weathers without any mishap to the structure. The tail is light, but strong enough, as it is a very unfortunate prang indeed that will damage it..." 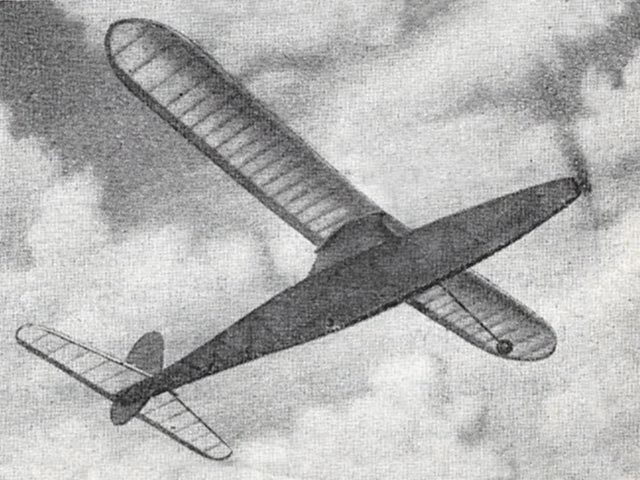