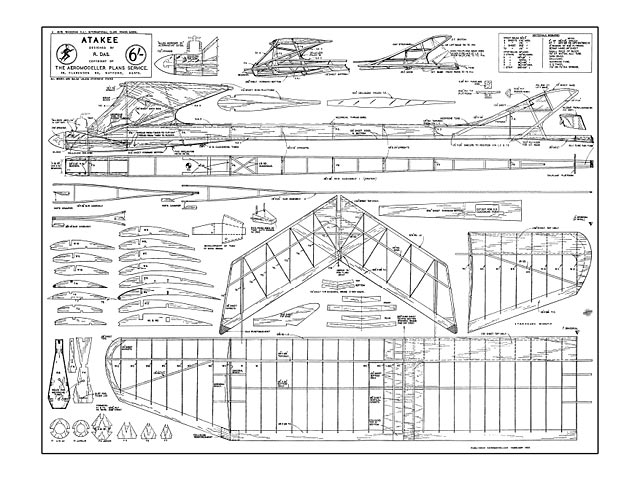 Pronounced 'Ah-tah-kay', Atakee is a slang term from the French Attaquer - to attack. It is used as a war cry when one is very enthusiastic and was chosen for this model because the side elevation gives the impression of being aggressive.

THE DAS TWINS, from Haarlem in Holland, are internationally renowned for their artistry in producing wonderful cutaway drawings of full-size aircraft. Technical drawing is their business, and aeromodelling their hobby. The two facts combine to give us a model of striking lines and an enviable contest record.

Rudolf Das designed the first of the Atakee series for his Elfin 1.8 diesel in 1953. He had been impressed by the Mexican 'Battiri' design with its long nose long fuselage and slim pylon, and so he decided to use a cowled engine blending into a swept pylon for similar effect. Tests were good. A vertical climb without use of any offset on the engine, and regular ratios of 11:1 led to a number of high contest placings and a demand for plans from fellow club members. Re-designed for easier construction in later '53, five new models were made by the Haarlemse Club during the winter, two with Elfins, one with a Frog 150, and two with Webra 1.5 Records. Test flights showed an average of 3:15 from 15 secs. engine run in good conditions. Both VTO and normal take-off can be used, and at the close of the '54 season the contest record included four 1st, one 2nd, and three 3rd places plus five team wins for the Haarlemse club.

Design points of this FAI. formula model are:

(1) Long nose with low thrustline and swept pylon, giving an enlarged Ioop radius and no requirement for downthrust.
(2) Thick tailplane with swept planform for directional stability, VTO points, and keeping more of the tail in the slipstream area.
(3) Span less than length for good rolling characteristics, large wing chord for good glide without affecting the climb.

British engines shown on the plan are the Allbon Javelin Mk.II and the new Allen Mercury 25, each of which is admirably suitable for Atakee as a contest model. With the AM 25, performance is outstanding but it should be remembered that for FAI regulations, all up weight of this version must be more than 17-1/2 ounces.

Wing: Start with centre-section spars and build wing on plan. Finish wing tips before joining the centre-section. As a result of the wash-out of the tips the trailing edge must be fitted after the tip is removed from the plan, the diagonal spar is fitted later. Cover with light Modelspan. 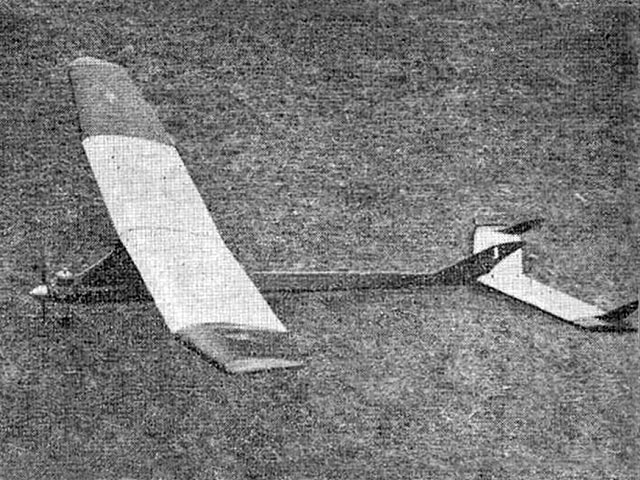