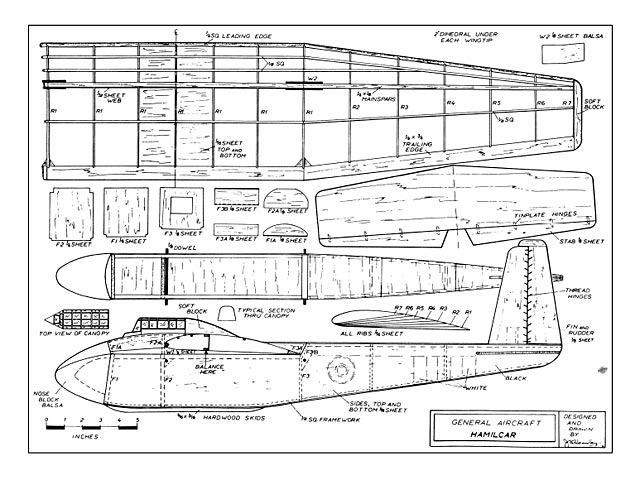 Quote: "A true Scale version of a well-used WW II troop and cargo-type glider for single channel flying. Slope soaring is its main forte but can be towed for thermal hunting! General Aircraft Hamilcar, by Jack Headley.

We've been quite interested in single channel gliders for the last couple of years; maybe this is a sign of getting older, now that we like to do our flying standing still rather than 50 laps around Sepulveda Basin every weekend! (Still, one or two visits down the slopes to pick up a becalmed glider is quite sufficient exercise for a sunny afternoon.) However, the fact that the local RC glider slope is only a two-mintue walk from our workshop may have something to do with it. So, various shapes and sizes of gliders have been produced, including some Scale types.

The model we present here is one of our latest scale models, the 'Hamilcar.' The full scale version was built in England during the 1940's by General Aircraft, and was the largest and heaviest glider used by the Allies in the Second World War. It was so big that a four-engine bomber was required for a tow plane, and it could carry a seven ton tank. Over 400 were built, and one version with its own engines was begun. This was the 'Hamilcar X,' and although a few of these were constructed, they were never to see action. Our model is a true Scale version of the normal Hamilcar glider, with the exception of the fuse-lage width which we slimmed down a little.

Construction is quite straightforward and should present no problems. The following notes were compiled during construction to aid the prospective builder.

Fuselage: Begin fuselage construction by cutting out the sides from 1/16 sheet, and cementing in place the 1/8 square longerons and uprights and the 3/16 square strips for the wing rests. These sides are joined with frames 1, 2, 3, and 3B, and when these have dried, the rear fuselage is glued together. Now add the 1/8 square cross strips and the local gussets as shown on the plan. The bottom sheeting is attached next; note that the grain of the wood runs cross-ways.

Make the stabilizer, omitting for now the trim tabs, and cement this into place. Add the upper fuselage sheeting, again cross-grained. The fin is slotted into this sheeting. Hinge the rudder to the fin by carpet thread, or use your own pet system. The trim tabs can now be attached to the stab, using scrap pieces of tinplate. Make the nose either from a solid block of balsa, or laminate it from 1/2 in sheets. Hollow this out as shown to provide a weight box. Addi-tion of the two hardwood skids completes the fuselage construction.

Wings: The wings are made in three pieces, a flat center section and two tip sections. Cut out seven R 1 ribs, two each ribs R 2 to R 7 and slot for the spars. Pin down the center section trail-ing edge and spars, and cement into place the five central R 1 ribs. Now add the top spars, the leading edge and the webbing behind the main spar. The wing tips are made in a similar manner, the port wing tip being made on the back of the plan. No wing twist is re-quired.

When these three pieces are dry, they can be joined together. Pin down the center section flat, and prop up each wing tip two inches to give the
required dihedral. Join the main spars with dihedral braces W 2; four of these are required. The last two R 1 ribs can now be installed. Add the soft block wing tips and the center section sheet-in at this stage. While this assembly is drying, frames F 1A, F 2A and F 3A can be made, together with the wing mounts W 1.

The canopy region is now attached to the wing structure. Pin down the W 1 pieces to the fuselage, and cement the wing in place, followed by F 1A, F 2A and F 3A. Plank in the remaining spaces with 1/16 sheeting, and add the canopy structure. The cockpit canopy can be made either from celluloid or soft balsa blocks painted silver.

Radio: The original model used a Testor's Simpulse I system, but any other radio of around this weight should be suitable. No particular mounting system is shown on the plan, but for the Testor equipment we mounted the actu-ator on a plywood board which was glued between two 1/4 square strips in the main compartment. Receiver and battery were packed into the forward compartment with foam rubber.

Finish: One of the basic color schemes tor operational gliders of this period was called 'standard night bomber finish,' and this is the scheme shown on our model. It consisted of black undersides, the black extending three-quarters of the way up the fuselage. This black is described as a 'velvety non-reflective preparation,' but we substituted flat black. The upper surfaces were camouflaged dark green and dark earth.

Gliders had little in the way of code letters; usually only a serial number was applied in red on the rear fuselage, a typical Hamilcar number being RR994. We also painted 'D-Day' stripes to the fuselage and underside of the wings to relieve the black finish, and then applied the roundels in the usual places.

Flying: We would like to say that the model flew straight from the building board (everyone else's models always seem to do this!), but it wasn't so. The first flight was a series of tremendous stalls, the last of which deposited the model into a nice patch of soft rocks. However, no damage was done, and the addition of a small lump of lead soon cured this problem. The CG location so determined is shown on the plan. No other flying problems were encountered." 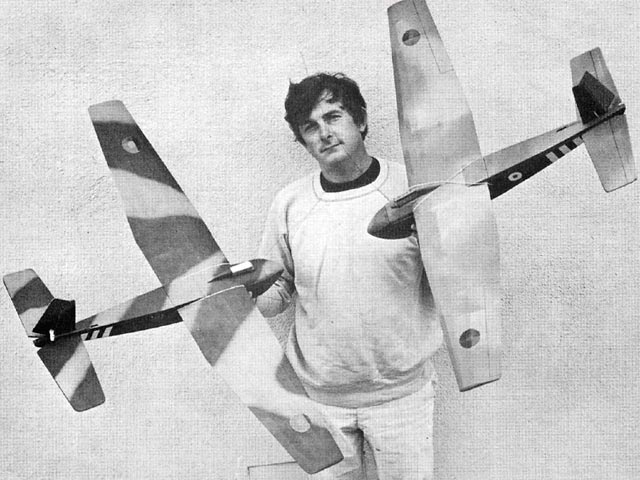