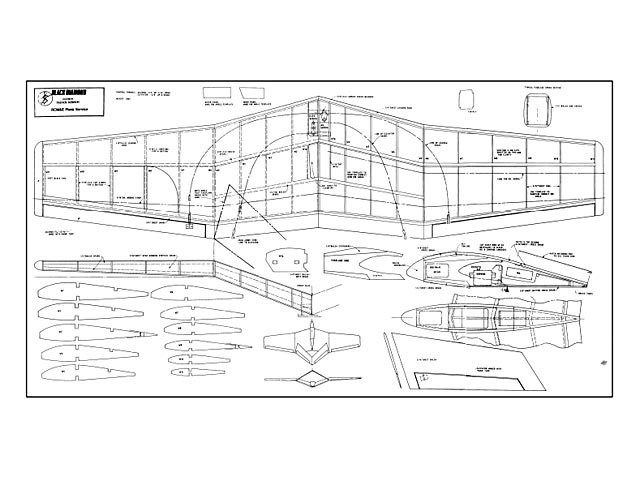 All I knew about my next model was that I wanted it to be different. But different from what? Different from everything I suppose. I remember looking at PSS kits and being mildly disappointed at not finding a twin boom subject. Anyway, I thought, twin booms are probably a bit vulnerable so perhaps I'll abandon that line of thinking and build a flying wing instead. But somewhere along the line I must have got hooked on the idea of attaching the tailplane at the ends, so this self-contradictory concept of a flying wing with a tailplane began to take shape.

In truth it didn't take shape for quite a long time. I am an inveterate doodler and time after time these peculiar not-quite-flying-wing shapes kept appearing. In the interests of keeping my job, I knew I had to get this thing out of my system!

Eventually all the lines came together in a not entirely repulsive shape - just at the time my new model room was finished. The new building board beckoned enticingly! The next club meeting was foam wing cutting night so the omens were good to embark on this project. Since almost every aspect of this design was experimental I thought it would be a good idea to at least start with a wing section that was known to fly. I therefore looked out the plans for the Obelix (oz8758), a slope flying wing from RCME (Jan, 1983), and used the templates from this to cut a pair of outer wing panels. The size of these was determined by the foam block that came to hand and following the proportions of my best sketch, it looked like I would end up with a span of just over 50 inches. This was definitely going to be a one piece model so this seemed to be quite a handy size.

Diamonds are forever. The wing centre section is the key to the shape of this model so this was clearly the first thing to build. The dihedral has to be quite steep in order to get a good diamond effect to the model when viewed from the front (or from the rear) and also to ensure that the tailplane has enough projected vertical area to dispense with the need for a fin. I opted to build up these inboard wing panels with all the ribs inclined so that they would be vertical when the panels were joined. There is no particular structural advantage in this approach but it does make it possible to use the sandwich method for cutting out the intermediate ribs. The second prototype was built by Peter Chaldecott (to whom I am indebted for drawing the plan and taking the constructional photographs) and has a fully built-up wing. Full details of this are shown on the plan but any permutation of foam/built-up inner/outer panels (preferably the same for both sides!) should do.

The additional half ribs support the ends of the servo bearers and provide an anchor point for the snakes. By extending these half ribs downwards to the full depth of your servos they also serve to define the cross section of the fuselage. It is worth doing a trial fit of the servos at this point and making sure you are really satisfied with the run of the control snakes. I would also strongly advocate the installation of an aerial tube in the wing to avoid having a long, untidy and vulnerable wire streaming out the back of the model.

In spite of the unorthodox appearance the controls are perfectly conventional, using ailerons and elevators. The only minor complication is the need for twin snakes for the two elevators. Remember that, unlike the ailerons, the elevators should both move the same way! I resisted the pressure from some fellow club members to fit a V-tail mixer for rudder operation, but did agree to make sure the aileron differential worked in the right direction. When using direct snake linkages, putting the horns on the top of the ailerons makes it easy to provide any amount of differential at the servo. If you don't fancy the horns on the top you can either mess around with bellcranks or, heresy of heresies, forget the differential altogether and remember to put a bit of reflex in the ailerons instead. More letters on that one, no doubt! You can now sheet in the complete wing panels, and add the leading edges, trailing edges and tips. Finally join the two wing halves together inverted with the tops of the outer panels flat on the board. You did remember to thread the servo bearers in didn't you?

The fuselage is little more than a battery box on the leading edge, faired in along the wing centre line. Fit the ply doublers first, gluing them to the protruding half ribs, then drawing them in on the nose former. Next cut away the centre section sheeting and root ribs behind the main spar sufficiently to accommodate the receiver. A little glass and epoxy, particularly around the joint in the top spar and webbing, will make up for the damage you have inflicted. You can now add 1/4 inch and 3/16 inch balsa to build up whatever shape fuselage you fancy - just make sure you can get the gear in and out!

Now to the tricky bit. Aesthetically the tail ought to grow out from the dihedral break, but this would result in a positive angle of attack with respect to the wing - precisely the opposite of what we need! Drawing in the leading edges of the tail overcomes the problem..." 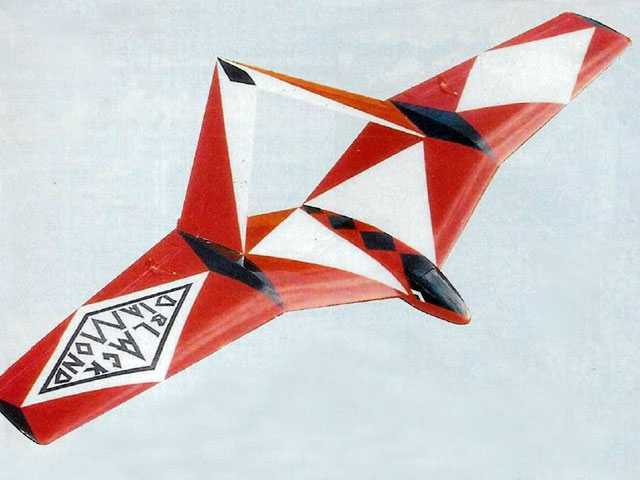