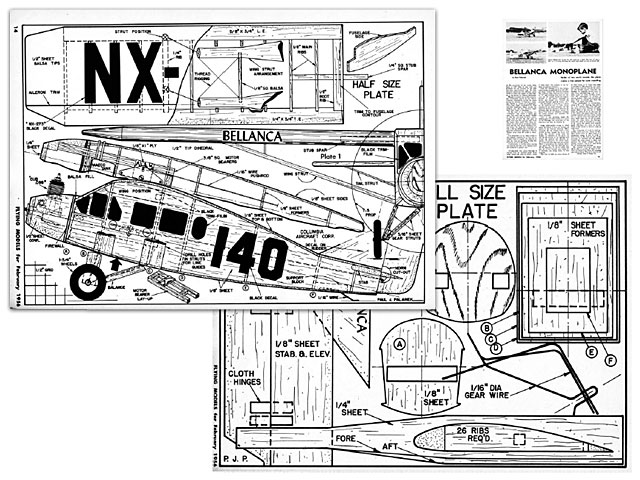 Quote: "The prototype of our model dates back to 1927 when it was built and groomed for an attempt at the first non-stop trans-Atlantic hop. But fate dictated otherwise - the Bellanca plane failed to make this flight - it was beaten to the record by Charles Lindbergh.

To the best of our knowledge, the Columbia was called a flying gas tank. The craft had an empty weight of 1850 lb, and took off with a stupifying total of 4,100 lb (451 gals, of gas), more than two and one half times the empty ship itself. This alone explains the need of an enormous airfoil plan, and the well known Bellanca lifting struts. To haul this mountain of fuel, a 200 hp Whirlwind J5 Wright engine was employed, spinning a Hartzel Walnut prop some 99 inches in diameter.

Our miniature is a 3/4in scale model of the original, powered by a Cub .099 or similar Class A engine. We adhered to scale as close as possible, beefing the structure at all weak points. Construction is started after scaling the plans to full size, or by having them photostatted to proper size.

Fuselage. The entire fuselage is framed from 1/8 medium grade sheet balsa. Shape the sides as shown, using 4 in wide stock. The balance of the 1/8 sheet is used for formers.

Since the fuselage is of box design, construction is narrowed to a few simple steps. Cement the formers between the fuselage sides, starting with former C and working fore and aft. Secure the 3/8 square hardwood engine-bearers in the precut openings as shown, and cement well. Cement the plywood firewall against former A. The bellcrank is mounted to a sheet of 1/8 plywood and, in turn, woodscrewed to the motor bearers. Cut the required lead-out clearance holes in the fuselage side..." 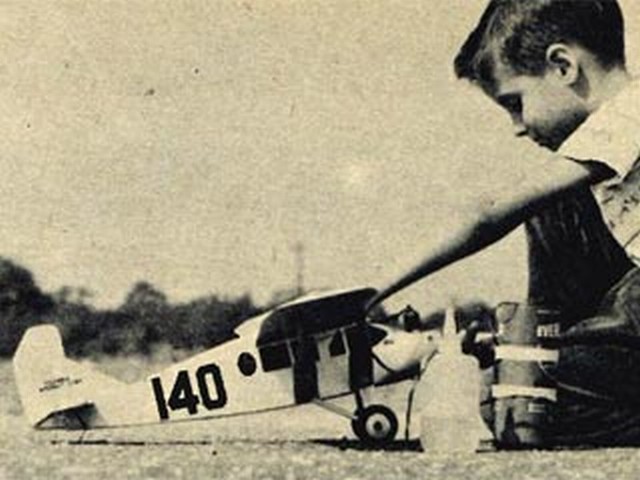