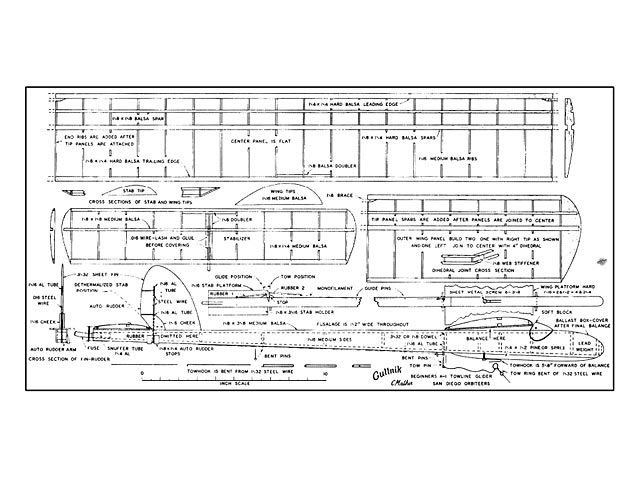 Quote: "Excellent towline glider for the inexperienced Free Flighter or beginning modeler. This is the simplest form of outdoor competition - requires no gas engine, just rubber power only and a long line! Gullnik, by Clarence Mather.

'Gullnik' is intended for the inexperi-enced modeler wanting to try his first Free Flight. The A-1 Nordic is among the simplest of outdoor competition Free Flights because it requires no rubber-powered propeller assemblies or gas engine-tank-timer. While they are comparatively inexpensive and fast to build, they are a challenge to fly well. The A-1 is an ideal small field event because limiting flights to a two minute maximum still makes a good contest. Gullnik is a good flyer of simple and rugged construction. It has been flown extensively in calm air and in wind. This article will go into some detail regarding the design and flying of A-1's to help the beginner better understand some as-pects of Free Flight modeling.

Let's start with the design. The Nordic A-1 is specified by the Federation Aeronautique Internationale (FAI). The lifting surfaces can have a maximum projected area of 279 square inches and the model must weigh a minimum of 5.08 ounces. (The odd numbers result from converting from metric to English units.) The projected area is found by taking the straight-across span and multiplying it by the average chord. It is less than the actual or plan area because the wing span decreases as the wings are tipped up for dihedral.

Generally a model should be as large as the rules allow to produce the lowest weight per lifting area (wing loading). A low wing loading allows a model to fly slowly and, if properly designed and trimmed, to have a low sinking speed. The low sinking speed builds up flight time. Also the slow flying speed makes it easier to tow a model up under light wind or calm conditions.

The lifting area is divided between wing and horizontal stabilizer. The stabilizer needs to be large enough to produce consistent flights and to cause strong dethermalizing ac-tion. It should be kept as small as practical so that the wing can be large - the wing provides the most lift per area. Experience has shown that a wing-stabilizer area ratio of five-to-one works well, so Gullnik's wing has 230 square inches and its stabilizer has 48. The ratio of wingspan to chord is called the aspect ratio and it should be about ten or twelve-to-one for an efficient glide. The higher aspect ratios wings are more difficult to construct into a strong, warp-free wing, so a ten-to-one was chosen for Gullnik.

The beginner might wonder why most gas-powered Free Flight models have low aspect ratios of six or eight-to-one. Competitive gas models travel at very high speeds during the engine run, which produce great strains on the wings. High aspect ratio wings are more likely to flutter and break. To resist would require heavy construction. Most Gas events have no minimum weight rule and the lighter, low aspect ratio wings perform better than the heavier, high aspect ratio ones. Our A-1 must weigh at least 5.08 ounces so we can build the ten-to-one aspect ratio wing without overweight problems.

The airfoils are considered next. Thin, underchambered airfoils offer the best per-formance. However they are more difficult to construct and are more likely to warp than thicker, flat bottom sections. The difference in performance is usually not great, so a rela-tively thick, flat bottom airfoil was selected for Gullnik. Experience has taught that the stabilizer airfoil should be thinner than the wings to produce good stall recovery..."